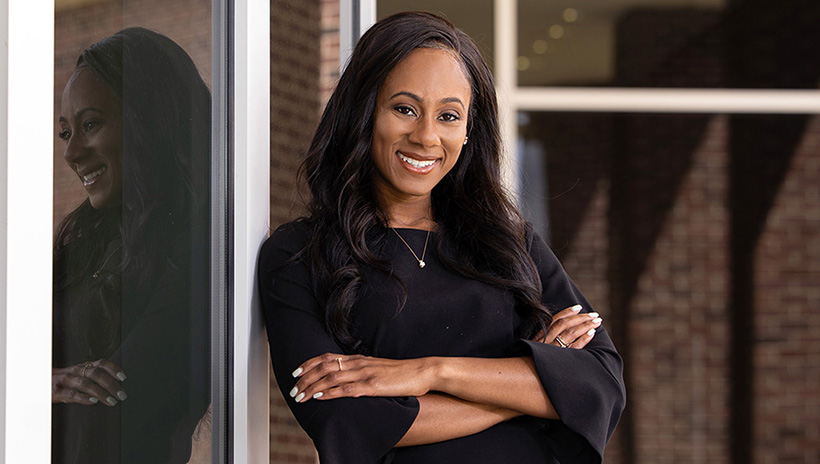 Octavia Miller, a student in the ECU School of Dental Medicine’s Class of 2023, earned a national scholarship award for her community service efforts. | Photo: Rhett Butler 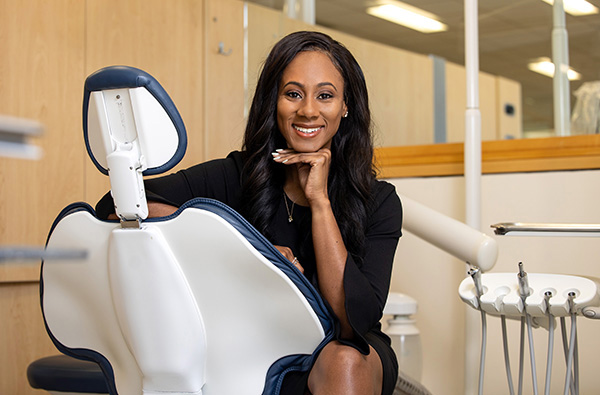 Octavia Miller’s mission is to serve through dentistry after she graduates in 2023. | Photo: Rhett Butler
When Octavia Miller visits home in Duplin County, her purpose goes deeper than simply returning to her roots — it's also about giving back to the people and the land that raised her.

Miller, a student in the East Carolina University School of Dental Medicine's Class of 2023, takes every opportunity she can to go back to her hometown of Warsaw and share information and resources on oral health care. She also speaks to school children on dentistry as a potential profession, cares for those in need and encourages others along their own life paths.

"I can't say I expected to receive it, but I'm glad I did," Miller said of the award, adding that she's already putting some of the funding back into her service projects.

To reach as many people in rural communities as possible, Miller researches events that are already planned in those areas and asks about setting up a dental education booth. On the day of the event, her booth is colorful and inviting, featuring free toothbrushes, toothpaste, floss, resources and even conversations with children on their future careers. She wants them to learn early on that their dreams are within reach.

"I ask them what they want to be when they grow up," she said. "Plant those seeds, and maybe they'll grow."

During her undergraduate career at ECU, Miller was a first-generation college student with a profession in health care in her sights. She had long been interested in dentistry, but she wavered every time she wondered if she could take on the rigors of dental school. She majored in health services management and business administration, knowing that she could opt to run a nursing facility, paralleling her mother if dental school didn't pan out.

Miller continued to mull over her options, knowing that whatever path she chose, it would be with home in mind.

Warsaw, an hour and a half from Ross Hall on ECU's Health Sciences Campus, is a small farming community that contributes to the meat industry within the wider stretch of Duplin County.

"It's one of those counties where there are more pigs than people," Miller said.

That setting taught her the value of hard work and hardiness. She worked five jobs — from retail to home health care — to pay her way toward her undergraduate degree.

"I learned that I have a work ethic and I don't mind working hard, and it taught me leadership," she said. "I also learned to roll with the punches. If you have a bad day, sleep it off and come back swinging."

Miller has taken that determined edge along for the ride during her dental school journey, to the point where she is considering how she can best serve through dentistry after graduation.

"I'm thinking about going straight into practice either back home or a place like home," she said, her eyes lighting up. "In the future, I would love to run a mobile dentistry unit that is specifically tailored to the elderly. We have older people who need us, and if I could set up in neighborhoods and care for them, it would be amazing."


Mission in the mirror

"It is something I always wanted to do, and I never gave up on that," she said. "I realized how many people needed me to do it — that pushes me more than my own desires."

Miller earned her undergraduate degree in 2014 and assessed her next move, taking on some modeling and acting work as she considered her options. That experience landed her the cover article in an issue of Her magazine, a women's interest publication printed through the Daily Reflector. In that article, Miller mentioned her interest in dentistry and activity in pre-dental groups. The article caught the eye of Dr. Margaret Wilson, vice dean of the School of Dental Medicine, who was then the associate dean for student affairs and active in student recruitment.

Wilson reached out to Miller and invited her to visit the school and learn more about how she could make her dream a reality. That conversation led Miller to Barry University in Miami, where she earned a master's degree in biomedical sciences in 2019.

She was ready for dental school — the final hurdle was choosing between ECU and the University of Maryland. In the end, the school most aligned with Miller's penchant for service won out. 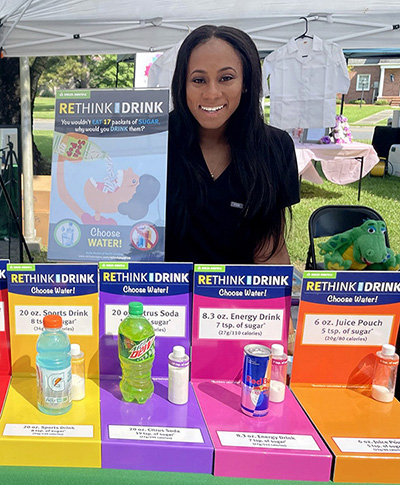 Miller attends events in rural communities where she shares information and resources on oral health care and dental hygiene. | Photo: Contributed
"It made more sense. This was home and it felt almost like destiny," she said. "The school's mission is my own personal mission. One thing I absolutely love about our school is that everything centers around the mission, including the way that they teach us. They work really hard to make us comprehensive doctors. I've fallen in love with the medicine part of dental medicine."

Wilson said Miller's determination and spirit make her a role model to others.

"I'm just one of the people cheering her along the way," Wilson said. "I'm very proud of the way she's stayed steadfast in her commitments. She's active in a lot of different leadership and service activities, but she's also able to do well in school. She's mature beyond her years and has really been resolute in her focus. She's destined to be a leader."

Beginning courses at the School of Dental Medicine was like "finding yourself all over again," Miller added.

She has explored every avenue to discover the best version of herself. Miller was one of two incoming dental students to serve as peer leader for the school's summer pipeline program, Preparing Tomorrow's Dentists, where she mentored other students. When dental school officially began, Miller emerged as a leader early on and her classmates elected her President of the Class of 2023. She became engaged as a leader within the ECU Chapter and Region 1 of the SNDA and within the school's chapter of the American Student Dental Association. She was also selected to serve as a member of ECU's Humanistic Environment Committee. She now serves as Member at Large on the National SNDA Executive Board.

Her classmates look to her as an example of what it means to be a student in the ECU School of Dental Medicine.

"Dental school is a challenging endeavor, and the only way you'll make it through this journey is through the support of your classmates and friends," said Kari Wordsworth, Miller's classmate and friend. "Octavia has been there for me time and time again. She is truly a light to my day when I get to work with her in clinic. I am thankful to get to do dental school with her."

Miller had come to dental school equipped with a mindset of getting involved and helping others — because she felt so many had helped her, including Wilson.

"It's astonishing sometimes, and I can't thank her enough, honestly," Miller said of Wilson initially reaching out to her. "I don't think other schools recruit as actively and purposefully as we do."

Experiences in undergrad and grad school led Miller to the SNDA, an organization created to promote, aid and support the academic and social environment of minority students. She chartered the undergraduate version of the SNDA at ECU and continued with the dental school's chapter.

"SNDA has given me opportunities to meet students across the nation," she said, adding that the networking aspect of the group shows students the power of connections and collaboration that happens across the field of dentistry.

The dental school's SNDA chapter has yielded consistent national leaders and scholarship winners over the years, something Miller is proud of.

"I never expected anything less from our chapter," she said.

Upon learning she had won the Audacity to Dream Scholarship for Community Service, Miller began mentally planning her next project and mapping out what supplies she would need.

"I'm so ready to put that money to work," she said. 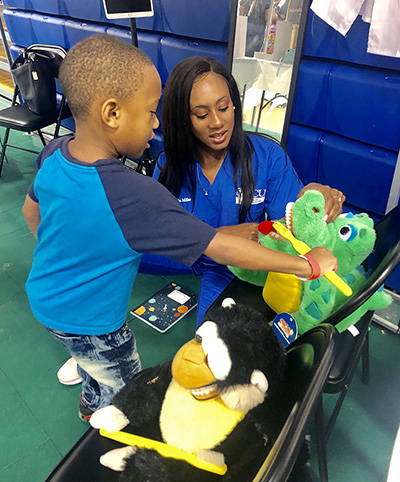 Miller provides education and resources to children as part of her community outreach and community service projects. | Photo: Contributed
Where there's an event planned — such as a Juneteenth celebration or back-to-school giveaway days — Miller is there, ready to demonstrate to children the proper way to brush their teeth or to explain how sugary drinks affect dental health. Being able to provide that service is meaningful no matter the setting, but seeing familiar faces pass by in her own hometown adds a dimension that keeps the path between Warsaw and Greenville familiarly worn.

"I'm there and I can just be a resource," she said. "In my hometown, access to care is a real thing, so I love when they ask questions. But then you also get some people who come by just to say they're proud of you. It instills in them that they're doing something right, that they all had a hand in my success."

In addition to the dental information booths, Miller has developed and implemented other community service endeavors. Miller's outreach includes providing hot meals for the hungry, and toiletries and personal supplies for the homeless, as well as other projects depending on need. She regularly speaks with elementary, middle and high school students about careers in dentistry, and mentors college students aspiring to pursue dentistry. She has become quite a public speaker, from national stages with celebrity dentists to local school commencements.

Miller has also brought her experience front and center on social media — where she gives honest advice and guidance to potential dental students and lets others follow her journey through her own lens. "Becoming Dr. O" is an Instagram- and Facebook-based inside look at dental school, where Miller can pass on the encouragement she received along the way to aspiring health care professionals. So far, she's reached 2,000 Instagram followers and growing.

"I want to be the person that I needed," she said. "This is my way of showing what dental school is really like."

People reach out to Miller every day through those channels, asking questions or seeking advice on the next step on their own paths. During every dental school application cycle, Miller takes on several students to guide through personal statements, mock interviews and other steps in the application process. She also tries to give a no-frills look at what it can be like to fail and try again.

"I try to show that I'm not always good at things," she said. "I fail, and I don't mind being honest. That's what people need: They think you're just going to get into dental school and that's it. Most people don't get in their first try. People think it's glamorous, but now you can see the real work it takes to get there."

Wilson said Miller's initiative to showcase dental school and lead others through it shows daily.

"One of the things that's pretty remarkable about her is that she does things on her own and will take it upon herself to develop an outreach project in Duplin County," Wilson said.

Miller's efforts to connect with current and potential students come from an energy to bridge a gap that was glaringly present as she navigated her dream. She hopes to not only make a difference in communities, but also to push others to work harder, strive higher and pass on a stronger legacy.

In the calm of a recent evening after the hustle of a day in dental school, Miller opened a new email message. It was from an aspiring health professional who expressed the drive to be like Miller.

She thought a moment before she tapped out an answer: "Be better than me."
Go Back