Personal liberties are under siege around the world 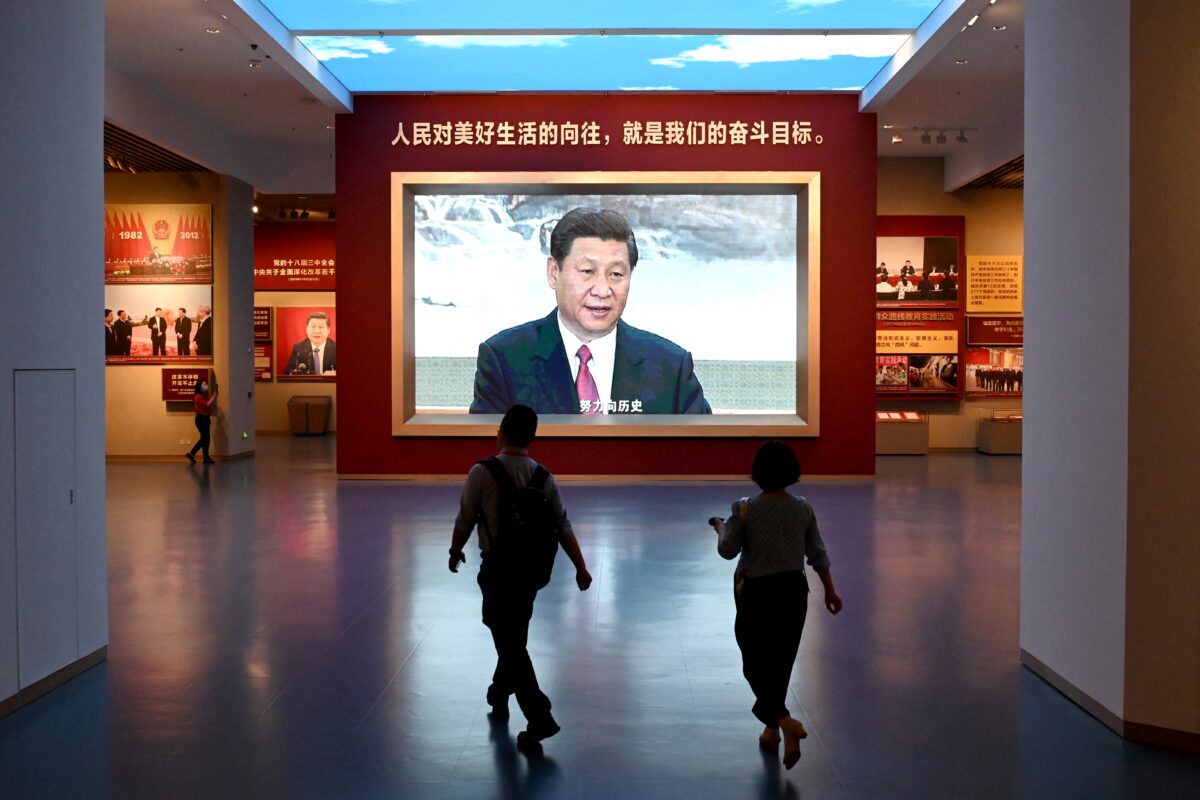 America is not the only place that personal liberties are threatened by Globalization.  We see it in Australia and of course in the Muslim nations, including Afghanistan.  But none of these trends comes close to the implications of what is happening in Communist China.  It is a scary thing to think about just a handful of men controlling the destiny of millions and millions of people.  As Lord Acton said in 1887:  Power corrupts and absolute power corrupts absolutely.

China’s tech behemoths are handing months of profits to the regime in Beijing to demonstrate loyalty to the Communist Party. Popular actors have been erased from internet history with their devoted online fan groups disbanded. Young gamers now are allowed no more than three hours of playtime per week.

Across Chinese classrooms, 147,000 newly minted inspectors have been deployed to oversee the national dissemination of the ideology of China’s top leader, Xi Jinping.

Be it e-commerce, entertainment, education, or gaming, few areas of Chinese society have been left unscathed amid Beijing’s torrent of regulatory activity in recent months. As authorities clamped down on the offending actors, stock markets tumbled with hundreds of billions wiped out, while companies and individuals have scrambled to assess the new rules, lest they tread on the regime’s toes.

The cascading crackdowns have been swift and puzzling, with some likening the Party’s attempts at social engineering to that which occurred during the Cultural Revolution, a decade-long period from 1966 when the regime’s first helmsman, Mao Zedong, sought to reassert his control within the Party by launching a mass campaign to destroy traditions, beliefs, and social mores.

A “profound revolution” is underway in China, declares nationalist essayist Li Guangman, a former editor for an obscure state newspaper. In a recent commentary quickly promoted on prominent Chinese state media websites, he hailed the regime’s campaign as a “return to the original intent of the Chinese Communist Party (CCP) … and the essence of socialism,” and offered up two potential targets: housing and medicare.

As with past measures, the Chinese regime has framed the series of actions as necessary for the public good. But the pace of the activity has been dizzying, with a thoroughness unseen in China’s recent memory.

It looks like the “opening days” of a cultural revolution, said June Teufel Dreyer, a political science professor at the University of Miami.

To Robert Atkinson, economist and founder of Washington-based think tank Information Technology and Innovation Foundation, some of the measures mark the latest efforts by Beijing to curb freedom of expression. He cited the ban on “effeminate actors” and gaming restrictions as examples.

“You get the sense that what Xi is saying is, ‘No, we don’t want a society that’s individualistic. Your job as a Chinese citizen is to support and follow the state,’” Atkinson told The Epoch Times.

“The goal of Chinese society is not to make people happy, it’s to make the state powerful,” he said.

The “straw that broke the camel’s back” goes back to last October, according to Dreyer, when internet giant Alibaba’s founder Jack Ma made a blunt speech criticizing China’s regulatory system. For his outspokenness, the entrepreneur went missing for three months. Overnight, regulators pulled the plug on what was meant to be the world’s largest initial public offering by Ant Group, Alibaba’s sister fintech firm.

The regime is “trying to prevent wealthy, vested interests like Jack Ma from … winding into the political decision-making process,” Dreyer said.

The punishment of Ma appears to be the lightning rod that set off a sweeping overhaul engulfing virtually all facets of society. Since then, regulators have pulled apps for alleged data transfer violations, shunned “misbehaving” celebrities, disciplined thousands of “self media” accounts for “badmouthing the financial market,” and barred paid private tutoring on core school subjects.

“It’s about sending a message that says to the capitalist class that … you as a businessperson are under the thumb of the state,” Atkinson said.

Paralleling the moves is Beijing’s renewed emphasis on “common prosperity,” a slogan the Party has touted since its early days as the end goal of socialism.

Xi’s recent pledges include redistributing wealth to close the yawning income gap—likely to drum up popular support as he mounts his bid for an unprecedented third five-year term late next year.

The targeted sectors have been racing to align with the Party’s decrees. Dozens of actors have signed statements supporting Beijing’s campaign. The embattled Alibaba on Sept. 3 vowed to spend 100 billion yuan ($15.5 billion) by 2025 in support of the common prosperity drive.

Behind the avalanche of changes is Xi’s vision for a grand national “rejuvenation,” a term he invoked more than two dozen times as he spoke from the balcony atop Beijing’s Tiananmen Square on July 1 to mark the CCP’s 100th birthday.

But the rejuvenation campaign has hit some domestic roadblocks.

China’s workforce has been shrinking for years, in part due to the decades-long birth policy allowing each household to have one child only. Even as Beijing moved to a two-child limit in 2016, the costs of raising children in urban China have deterred would-be parents. China, now encouraging a third child, has called off tests for first- and second-graders and banned for-profit tutoring firms, blaming them for adding a financial toll on families. Hotlines have been set up to catch violators.

Such measures haven’t necessarily been embraced by Chinese parents, who are known for expending large amounts of time and money on their child’s education to ready them for the hyper-competitive university entrance exams.

“This is the system’s flaw, and students and parents shouldn’t be asked to bear the consequences,” Amy Ma (a pseudonym), a primary school teacher in central China’s Hubei Province who has taught for 30 years, told The Epoch Times, adding that the education policies would do little to ease parents’ anxiety about their child’s future.

For most Chinese families, the education system is “the last chance to change their children’s fate” when “the Party has monopolized all resources in society,” she said.

To boost their academic performance, Chinese kids would now have to turn to in-home tutors, Richard Zhang (a pseudonym), a division chief for a city-level education bureau, told The Epoch Times. With the tutor pool slashed as a result of the new regulations, the cost of such services could become prohibitive, he said. Thus, ultimately, it may only be rich families who can give their children a competitive edge.

A lack of enthusiasm from Chinese millennials also is hindering the regime’s prosperity drive. A new counterculture movement called “tangping,” or lying flat and doing nothing, is catching on with young people, who are becoming increasingly dissatisfied with the exacting demands of professional and social life.

Labeled as “disgraceful” by Chinese state media—while praised as a silent form of resistance by some others—the “lying flat” approach to life adopted by many young Chinese is the exact opposite of what Xi needs to back Beijing’s ambition, Dreyer said.

“He wants to see a highly competitive society in which everyone works hard and therefore the Chinese country nation is able to eclipse the United States,” she said. “He’s not going to get it if people are going to lie flat.”

A pressing cash problem is also forcing Beijing to turn on the rich, according to Antonio Graceffo, an analyst of China’s economy and Epoch Times contributor who has spent more than two decades in Asia.

The highly contagious Delta variant of COVID-19—which spread to half of China in August—has continued to challenge Beijing’s costly strategy of shutting down cities and quarantining every positive case, which has disrupted travel and dented tourism, a once booming industry contributing to roughly a tenth of China’s economy in 2019.

Sales growth and factory output in August both hit a one-year low as authorities toughened social restrictions to curb surging virus outbreaks. China’s overall debt meanwhile grew to about 270 percent of its GDP in 2020, a jump by about 30 percent over one year.

Monthly data from August showed that one in every seven young urban workers—those aged 16 to 24—have failed to find employment. The move against the private tutoring industry has put some $140 billion at stake and triggered waves of layoffs.

Such signs suggest “the brink of an economic crisis,” Graceffo told The Epoch Times. “The money has to come from somewhere.

“I think that Xi Jinping is reaching for anything to make money.”

Attempts to stimulate growth will be further frustrated by the CCP’s practice of embedding Party branches in companies, which puts another strain on economic freedom.

Alongside such domestic challenges, the regime is facing strong headwinds from the West.

In the past year, Beijing has aggressively pushed back as Western criticism rises over the regime’s human rights record, militarism, the lack of transparency on COVID-19 origins, and its consistent efforts to cast the blame on the outside world.

Clad in a gray Maoist suit during the Party’s centennial, Xi warned that foreign forces would figuratively get their “heads bashed” if they dared to bully China.

The regime’s recent policies give off a sense of growing wariness toward Western influence.

Gone are English-language tests from Shanghai’s primary schools; in is a new course on Xi Jinping Thought—mandated from grade school through college nationwide.

Beijing is setting up a third stock market that some analysts read as a move to financially decouple with the West. A new data law, applying to Chinese and foreign companies alike, expressly prohibits the transfer of domestic data into foreign hands and threatens to retaliate against any country using “discriminatory” measures with respect to data.

Social media channels have been purged for “reposting overseas reporting or commentary that carry distorted interpretation of China’s financial trends.”

“You don’t want people thinking about anything except the Party and how to serve the state,” Graceffo said.

According to Dreyer, the regime has decided to make a “trade-off”: Cutting English studies and private tutoring could throw millions out of work, but it also means students have more time to study Party ideology.

“Less English instruction, more indoctrination, in the long run is what China needs,” she said.

But given China’s share of global trade—nearly 15 percent in 2020, and third only to the European Union and the United States—keeping out Western influence entirely may be impossible, Dreyer said.

“You can’t divorce the technology completely from the society that produced it,” she said.

“He’s simply trying to resist,” Dreyer said, referring to Xi. “The future is not preordained, it never is.”