Are Democrats Refusing to Invest in Beasley?


The November 8 election is right around the corner, and with it comes a bombardment of campaign mailers, advertisements, and canvassing efforts that most voters have likely already experienced in some fashion. North Carolina has become one of the most competitive states for senatorial elections over the last decade, with Republicans taking victories with narrow margins.

As North Carolina has gained notoriety as a "battleground state," greater financial investments have come to our elections. This is evident from looking at either of Republican Sen. Thom Tillis' elections, which were the most expensive Senate races in 2014 and 2020 nationally, excluding the Georgia runoff election in 2020. But is running for North Carolina's other Senate seat just as costly?

The most recent John Locke Foundation poll has former Chief Justice Cheri Beasley (D) and Congressman Ted Budd (R) in a statistical tie for this year's senatorial election and the generic congressional ballot slightly favoring Republicans this year. As one of the states pivotal to the makeup of Congress, how many resources are various groups putting into these races?

While we will have to wait until October 15 to see the candidate finance reports, the Federal Election Commission's (FEC) independent expenditure (IE) reports are already available to the public online. Independent expenditures are considered expenditures by groups not officially affiliated with any specific campaign but are advocating for or against a candidate. According to the FEC, North Carolina has received $30 million in IEs throughout the general election for this year's senate race. There will be an even greater investment as we approach November. 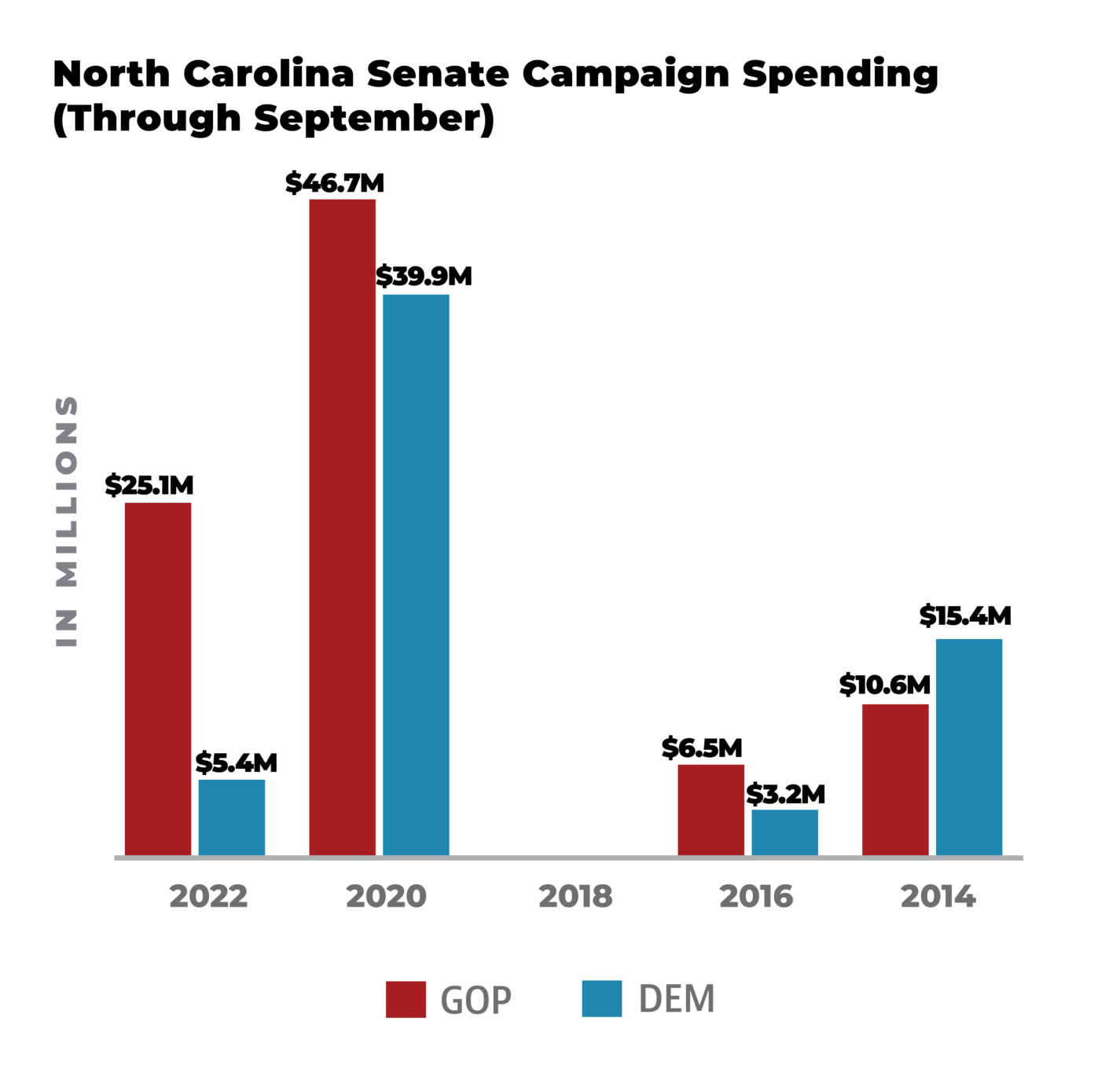 While $30 million is a staggering sum in most situations, it's impossible to understand what kind of investment it truly represents without context.

Using the FEC's database, the Civitas Center for Public Integrity calculated the total IEs for North Carolina's federal races in recent election years. The following chart break down total IE expenditures from the start of the general election to election day in November. This is tracked by individual elections, avoiding inflated numbers from runoff primary elections such as the 11th district runoff election in 2020.

Where do Beasley and Budd stand in terms of IEs?

With the race between Beasley and Budd so tight, Democrats in North Carolina have bemoaned the lack of support from national progressive groups toward Beasley throughout the general election. Many have assumed that Democrats were hesitant to invest in North Carolina's Senate election, either because they were prioritizing incumbents or simply because Beasley's polling numbers were too far behind to warrant the investment in an assumed GOP wave year.

While progressives have not injected as much outside money this year as they had in 2020 in attempting to unseat Tillis, their spending is ahead of what they spent for this Senate seat in 2016. Democrats have invested roughly $2 million more for Beasley's campaign in the general election than they did for Deborah Ross' in 2016. It's likely that this increase in spending is being overlooked since North Carolina's last Senate race, between Tillis and Democrat Cal Cunningham, turned into one of the most expensive races in U.S. history and because conservatives are simply investing more in this election in terms of IEs. Republicans have spent nearly $25 million in IEs for Budd, with most of this funding coming in the latter half of September.

What to expect in IEs from now to election day

Over the last decade, Republicans tend to outspend Democrats in IEs before September, while Democrats receive more IEs overall in the general election. As we move through October, we should expect both candidates to receive somewhere between two to ten times the current investment in IEs. If Democrats continue to invest similarly to the 2016 election, Beasley could easily reach $50 million in IEs by election day. 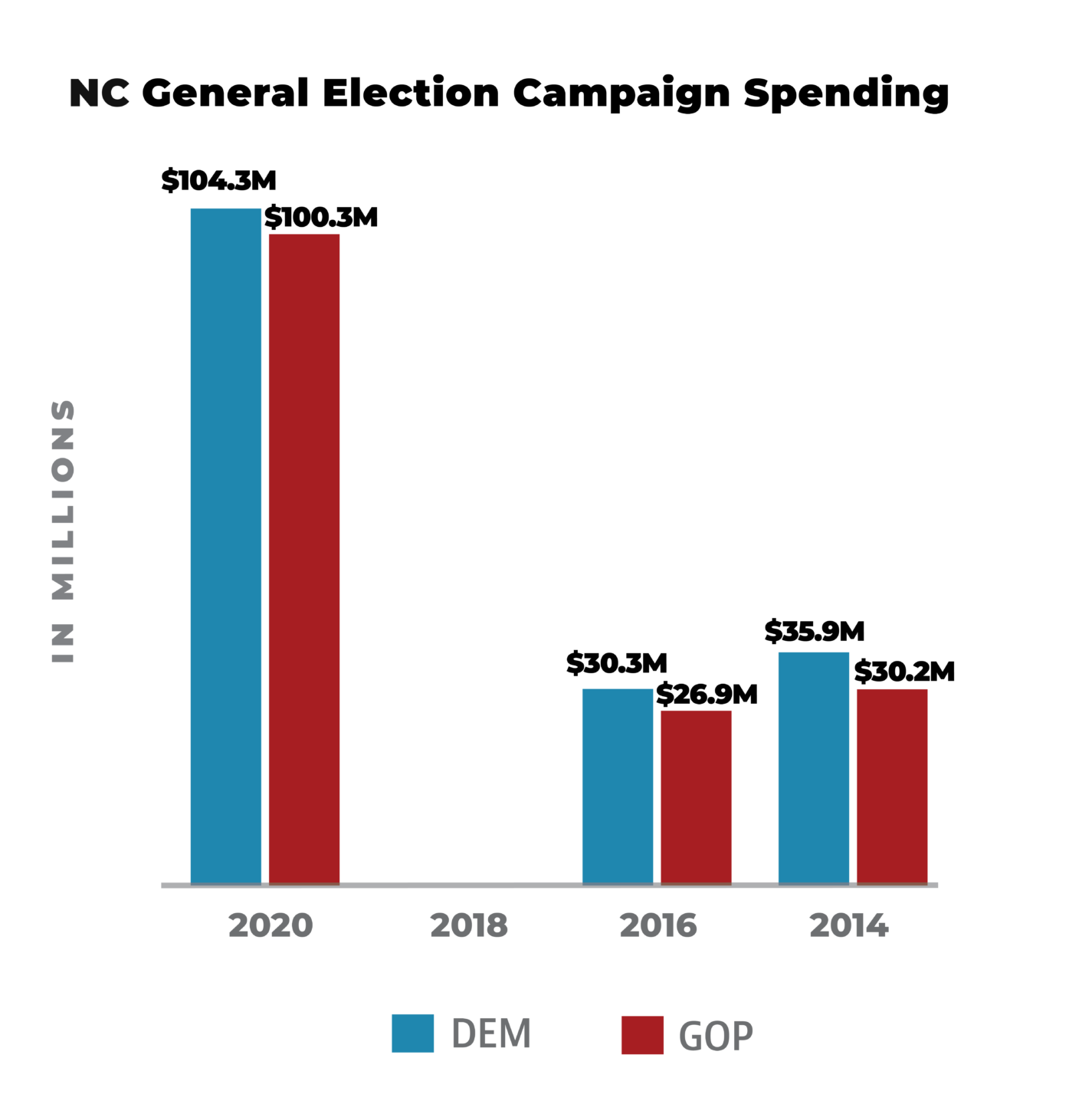 While Republicans have invested a large amount of money into Budd's candidacy, it is doubtful they will have the same growth rate in IEs as Democrats. Likely, Republicans will spend somewhere between two or three times their current investment going into November.

Democrats have 14 Senate seats they are trying to defend in this year's election, five of which are considered only slightly in their favor or toss-ups. This election cycle is just not as favorable to Democrats taking spending risks as were the Senate elections in 2014 or 2020. Because Republicans are investing in North Carolina more than they usually would for this seat, Budd could buck the trend of Republicans being outspent in IEs.
Go Back