In Concert: Missy Raines and the New Hip | Beaufort County Now | Missy brought the boys to town to play the Turnage Theater and their unique, functioning blend of jazz, rock, country, and bluegrass blew me away.

In Concert: Missy Raines and the New Hip

Login to Send a Private Message to Wyatt Sanderman Day
Rhythmic Rhapsody: Missy Raines and the Boys Get the House Rock'n

Missy and the boys take stage.     photos by Stan Deatherage

Understandably, I did not know of their existence before that fated Friday night when we were introduced. Now it is Sunday morning, I am having my strong morning coffee, with plenty of half and half and sugar, and me, Missy and the boys are having a fine symbiotic moment - their music, my moment. At every Turnage Theater production, when I enjoy the music, I purchase their most recent Compact Disc. It often brings back the varying, vintage moments of their show. Presently as I scribe these thoughts, Missy and her New Hip is reprising their show, and it is a perfect clarion memory, beautiful beginning to a bright breezy day.

From the way this band makes me feel to the way this band makes you feel is who they are, and I will define that experience to the extent that I am capable. Sincerely, they made me feel good. Was it their well crafted compositions, or the presentation of their well honed musicianship, which catapulted mine and this audience's experience to transcend the polite reception of an aspiring group of young musicians to that of acknowledging the presence of these exceptional talents? Probably a great deal of both.

This ensemble is so talented in the wings with its young men playing from my left to right: Ethan Ballinger on acoustic 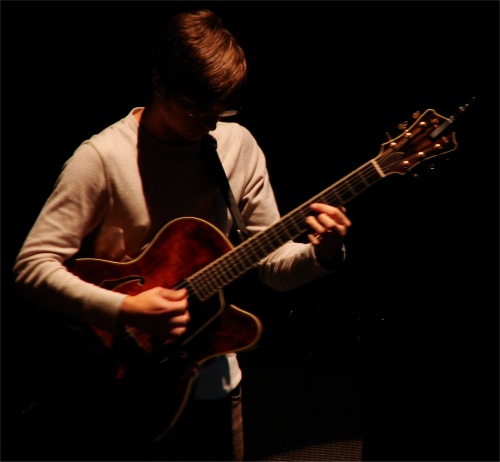 guitar and electric guitar (the big ones like the used in the early 1960's, Michael Witcher on the dobro and on the electric guitar, which he mostly plays on his lap with the metal fret slider, and Dominick Leslie on the mandolin. As is the method of good bluegrass bands, which Missy Raines and the New Hip is at their core, every one of these young men must play lead; on some songs two or all three play lead. Each are similar in their level of proficiency, however, their styles, and the instruments they play are quite dissimilar. The one standard for each of these performers is the unique tones that they strike from these customary bluegrass instruments.

Another constant for this fine amalgamation of musicians is the solid bass line and accompanying percussion / drums respectively supplied by Mother Missy and Rob Crawford. Missy has such a fundamental grasp of what constitutes a firm foundation to the fancy music this band makes, that just takes solid control of that direction. Rob Crawford, who is reasonably new to the group, has such a sincere sense of where Missy wants to go in her complex bass rifts that he complements well her hard riffs, which lays straight the rigid backbone of this progressive bluegrass band. The young men in the wings need only to shine through their talented leads to make this music work. 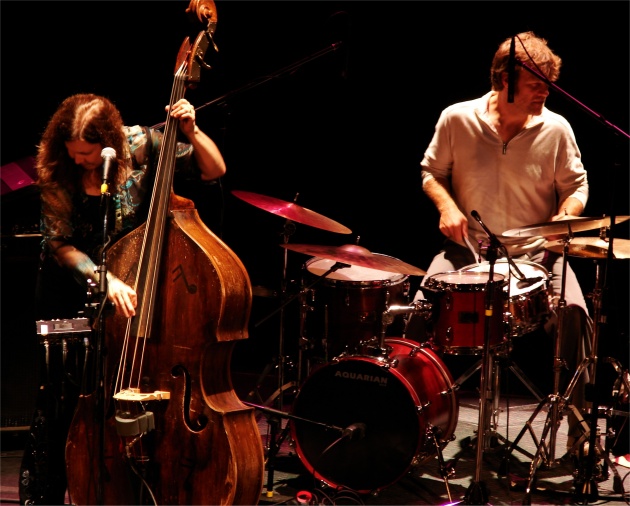 And oh, does it work so well. And as much as I would like to speak authoritatively in favor of these talented musicians, 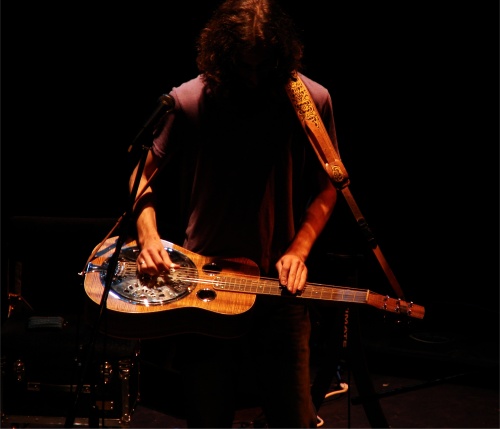 I can only tell you what I know from I saw and heard that first concert, and now that I have heard again with their newest CD, "Inside Out." I have listened to it thrice on this wonderful Sunday, and I do believe I am enjoying it more each time I listen to it. It is mostly a collection of ten tunes, exploring and therefore explaining a great diversity in their message of ever flowing notes that seem to wash easily, and so completely over and about me. As I discuss the merits of this fine catalogue of their latest tunes, for I do believe they played every song in the concert, I will give you a short picture of their show last Friday night. Maybe the collection of concert pictures that I took from my perfect balcony seat will give some proper exposure this new discovery, that I hope you may discover as well.

From top to bottom, we will take a look at a few of their songs, until I can find the time to review the entire compilation at a later date: the titular tune, "Inside Out" is a perky, rambling instrumental bass bomb that rambles hard and 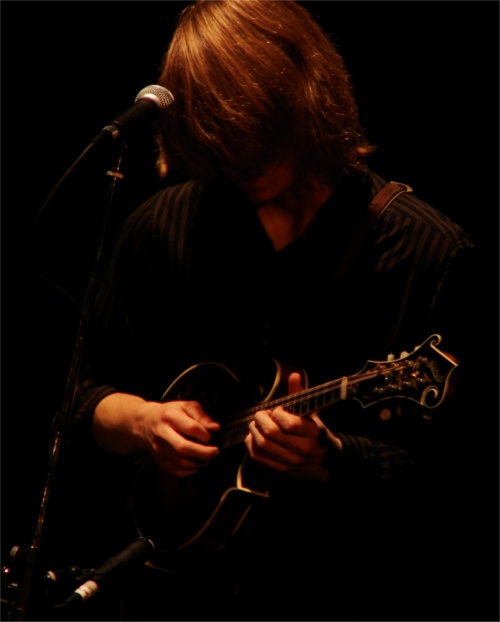 fast down the jazz path searching for a lead and Mike Witcher's dobro pick's the pace quite well. Next on lead is Dominick Leslie's mandolin, and then Ethan Ballinger's guitar dancing in and out of the flow that eddies down the stream built on Michael's dobro rift. It is a great tune. Continuing on with a more pure, but streamlined facsimile of traditional country / bluegrass is "Basket of Singing Birds." It is a beautiful tune that weaves all aforementioned leads in perfect measure with Missy's smoky jazz, sweet West Virginia voice in perfect harmony within this inventive arrangement.

"Duke of Paducah" is another pleasant ramble along a different Jazzy path that take me in a foot popping, knee rock'n place, like the Allman Brothers' "Jessica" from "Brothers and Sisters," did to me, but yet the tune is certainly no rip off, and you should, as we are all unique, hear something altogether different. The song is a contribution from, as far as I can tell, former guitarist Dillon Hodges.

I hope that my scrutiny of these first three tunes will sustain you until I have an opportunity to continue the full review of "Inside Out," which I will supply with pictures from the October 23rd show. I pray that if Missy Raines and the New Hip ventures into your area on some sturdy stage in some small local music hall, you will take the opportunity to treat yourself to their most excellent music. If you enjoy the uniquely different tones of true musical artists, you will be satisfied with the time you spend for the small price of a reasonably priced ticket. I am looking forward to their next show in my region of eastern North Carolina, and I hope they will not tarry in their return.

As I bid you farewell, I will leave you with a few of the images of Missy Raines and the New Hip in concert here below: 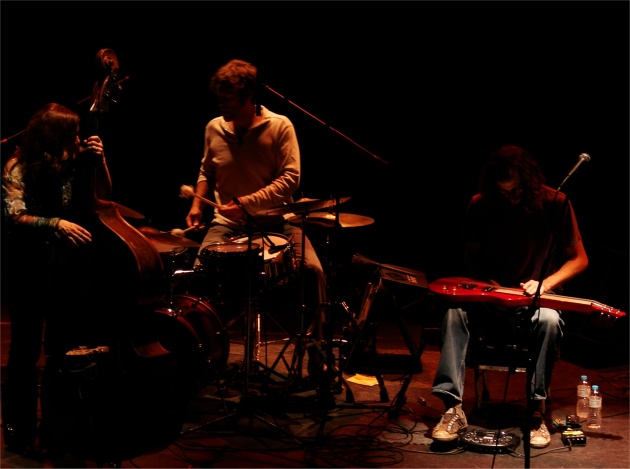 Missy and the boys, in the kitchen, cooking up a pretty fancy musical omelet. Michael is playing, what he calls, a resonator guitar in his lap.     photos by Stan Deatherage 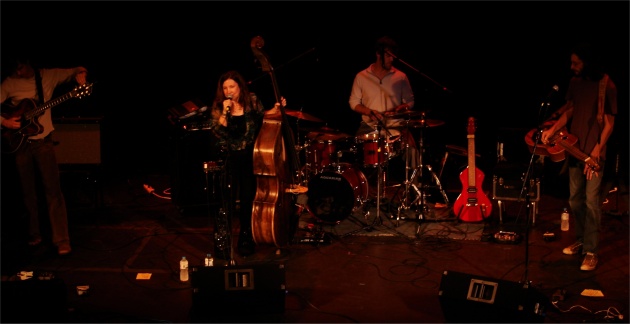 Missy introducing the band members, one at a time at intermittent points during the show. At one point, when Missy was introducing Dominick Leslie, the youngest and newest band member, he remarked back to Missy, "Thanks Mom." That was kind'a sweet.