Do you control the gun or does the gun control you? | Beaufort County Now | After you have reconciled your need to own or carry a gun for self-defense, it becomes just a tool. | Gun concealed carry, own and carry firearms, John Bernard Books, John Wayne, Chet Atkins, Gun Violence, Dirty Harry, Smith & Wesson Model 29

Do you control the gun or does the gun control you?

Login to Send a Private Message to Bobby Tony
Here is just a point of clarification on an article Ted submitted based on a conversation we had on the phone. The conversation was rambling and I was offering the devil's advocate or provocateur position on concealed carry. I am 100% in support of the individual's right to own and carry firearms. I do not support additional laws restricting gun ownership. This article was written prior to our conversation and has minor edits to reflect that phone conversation.  Here is the link to Ted's article.  Bobby Tony

After you have reconciled your need to own or carry a gun for self-defense, it becomes just a tool. John Wayne knew the danger of hesitation in a shootout, but he was usually shooting blanks.

John Bernard Books: First of all, friend, there's no one up there shooting back at you. Second, I found most men aren't willing, they bat an eye, or draw a breath before they shoot. I won't.    John Wayne in the the Shootist

A master carpenter or painter views the tools of his trade with a mixture of awe and reverence, right? I do not think so. Most craftsmen view their tools as just that; tools. They realize that they must keep them in good condition for use but I do not think they assign any more significance that. The talent in creation is not in the tools but in the master. Naturally, they will want the best tools they can afford to make it easier to practice their craft. A hammer is a hammer, a paintbrush is a paintbrush, and most tools are a means to the end. If you have ever tried to learn or play a guitar with a cheap pawnshop guitar, you know that the fretting and string placement make a great deal of difference in the sound. But a good guitar does not make you a Chet Atkins or Mark Knopfler. In the hands of a master, the tools are an extension of themselves. Well, if you choose to use a gun, treat it the same way. A tool used to place a projectile in a specific place at a specific time and do so repeatedly.

"The number one misused term is 'Gun Violence'. My guns are peaceful, and sit quietly in their safe, never engaging in any acts of violence. They are incapable of any act. If somehow some depraved person got them and committed an act of violence, as he may with any weapon, they would be the responsible party". (Unknown)

Therefore, if the gun is just a tool, we must assume that you are the master and the gun is the tool. If you watch a novice shooter at the range or just plinking cans in the backyard, you will notice that the shooter's reaction and anticipation is often based on his choice of weapon.

You choice of a self-defense weapon is as individual as the carpenter's choice of a hammer. You would not expect a finish carpenter to use a sledgehammer for trim work. If you choice of a weapon is too heavy, you will have difficulty holding at arm's length on target for any length of time. If the recoil is too big, you will anticipate it before you shoot and probably tense up in preparation of the kick. If it is too loud, you will instinctively prepare for the noise. If you are shooting Dirty Harry's Smith & Wesson Model 29, 44-caliber revolver you can bet that there will be a flinch or recoil reaction to the kick and sound of the gun. The most common reaction to new shooters is "Flinching". No one-handgun is suitable for every person. Each will be an individual choice. If you add the additional circumstance of 'Concealed Carry' the other consideration will be size, portability and capacity.

Like all skills, practice makes perfect. You should be prepared to spend as much money on ammunition as necessary to become familiar and competent with your weapon.

There are many techniques to train using a weapon. Here are just a few:

My last bit of advice is to reconsider your commitment to actually carrying a loaded weapon for self-defense. Are you prepared to actually kill someone and under what circumstances would you use deadly force? How old are you and how long have, you been able to survive without resorting to carrying a gun? As much as I believe in the 2nd amendment right to own and carry firearms, I am also wary of untrained and novice citizens wandering around with a paranoid view of the threats behind every tree and a tendency to over react out of fear or prejudice.


I just don't want to pass more laws to limit your rights.


Just in case anyone is interested in the Icon picture. For his movies, John Wayne wore a gun belt that centered the .45-70 long rifle cartridge in order to separate the other two similarly-looking cartridge. Historian Jim Dunham says that one side (probably the right from the buckle, around to the long case) was filled with .45 long Colt ammo that fit the Duke’s revolver. On the other side were .44-40 caliber cartridge that fit his Model 1892 Winchester carbine. The two cartridges look identical; if one got mixed up with the other, it would easily jam the firearm. 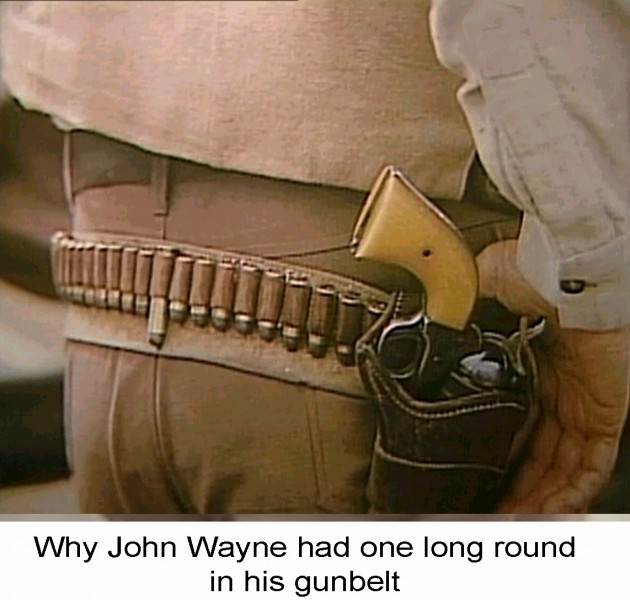