Pearl Harbor: The 25th Infantry Division on December 7, 1941 | Eastern North Carolina Now | For many civilians, the memories of a military event are an abstract memory. However, for the participants it is the faces, names, and specific events that mark the event. Here are some of their stories.

Login to Send a Private Message to Bobby Tony
For many civilians, the memories of a military event are an abstract memory. However, for the participants it is the faces, names, and specific events that mark the event. Quite often, we read history in the larger context of the geo-political significance.

I was not even born on December 7, 1941. My arrival did not occur until days before the end of the war in 1945. As a result, my knowledge of the Pearl Harbor attack is based on movies, historical accounts and abstract analysis.

However, I have found in my own experience that one of the best ways to tell the story is by listening to the individual stories of those that actually participated in the event. My unit in Vietnam was the 25th Infantry Division. They were based in Hawaii at Schofield barracks during the attack. Below is an extract of specific memories as documented on the Unit website. - Bobby Tony 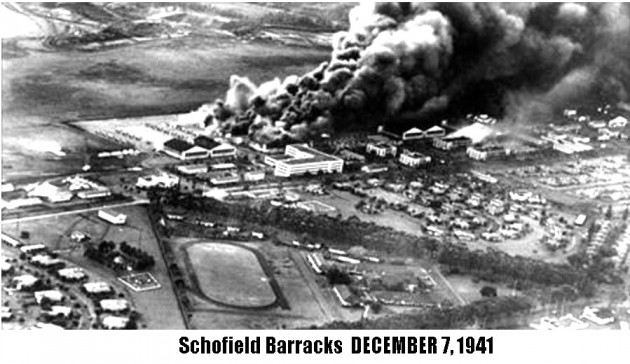 The Association considers this report to be an open document to be added to as additional historical documentation is acquired and/or when additional eyewitness accounts that provide new information are received.

Introduction: The Japanese surprise attack on Pearl Harbor and other military installations on the Hawaiian island of Oahu on December 7th 1941 has been well documented and described in numerous official and other authoritative publications over the years since its occurrence. However little or no detail can be found in these publications of what specifically occurred during the attack at Schofield Barracks and to the units of the 25th Infantry Division located elsewhere on Oahu.

STORIES INSIDE THE 25th INFANTRY DIVISION'S FIRST COMBAT IN WWII


Within the Hell of the greater experience of combat there are many actions and events taking place. They are sometimes serious, sometimes humorous, but always an important part of the greater picture.

Sergeant Kenneth C. Nine, a platoon sergeant in Company F, 27th Infantry was sitting on the ground in front of the barracks when the Japanese planes came over Schofield. Sergeant Nine had been relieved of duty and was scheduled to return to the Mainland for reassignment on Monday, December 8, 1941. Sergeant Nine had been partying all night until 0500 with five others who were also "going home" on Monday. Nine says, "my Commanding Officer told me to get in the saddle because I wasn't going anywhere". Sergeant Nine was suddenly alert and 'all soldier' again-breaking the supply room doors, getting machine guns, weapons, and ammo, and heading for the roof top.

Intense desire to fight back and anger was evidenced by men futilely firing weapons at the Japanese planes-weapons that were not likely to bring the planes down. Corporal Bronsil L. Metz, a gunner in the 90th Field Artillery Battalion saw Captain Dailey firing his .45 caliber pistol at the planes as he was running across the parade ground. Sergeant Boyce Huson of the Division Headquarters and Military Police Company remembers seeing Private First Class Ledgerwood standing in the Quadrangle firing a Springfield rifle at attacking airplanes. 1st Lieutenant George F. Carter of the 90th Field Artillery Battalion relates the story of his Battery Commander "Pop" Warner running out of his house and standing on the lawn in his pajamas, firing his .45 caliber pistol at the Japanese planes.

On guard duty near the Ewa gate, Private Charles K. Day of the Division Headquarters and Military Police Company was ordered to return a work detail of prisoners to the Stockade. Traveling under the flight path of the attacking planes Day safely returned the prisoners. He recalled being on alert for 2 weeks-an alert that for him terminated the evening of Dec. 6th. Private Donald Hall of the same company tells of an officer from the Division Intelligence (G-2) section saying the planes were American until a burst of machine gun fire from one of the planes narrowly missed them.

1st Lieutenant John Fahey, Executive Officer, Battery C, 64th Field Artillery Battalion lived off-post in a rented house in Wahiawa with five other officers. The evening of December 6th was spent at the Officers Club's weekly dance, followed by partying at home into the early morning hours. Sleeping soundly in the a.m. of Dec. 7th, the sound of explosions, walls trembling, and windows shivering didn't get Fahey up. The yell "you guys, the Japs are bombing Pearl Harbor" had them all outside in seconds. The sight in the distance was of planes looking like a swarm of angry wasps circling and diving, bombs exploding, and ant-aircraft artillery bursts peppering the sky. Back inside radios were blaring, telephone ringing and all getting the message - "Alert Level Three (All Out) is in effect - Report for duty at once". En route Fahey saw a Japanese pilot leaning out of the cockpit of a plane flying low overhead. In Wahiawa he saw a downed Japanese plane. He witnessed civilians crying and screaming after their bus had been strafed. At Schofield he found the barracks empty, drew a pistol and three clips of ammo then joined the rest of the battalion all loaded up and ready to roll.

An ammo handler and truck driver in the 90th Field Artillery's Service Battery, Private Leon Cohen, remembers a Browning Automatic Rifleman wounding himself when he accidentally dropped his weapon which discharged. In his memoirs Lieutenant George F. Carter confirms the wounding of the BAR man during the attack on Schofield.

Corporal David I. Breedlove of the 35th Infantry, Corporal Bronsil L. Metz of the 90th Field Artillery, Private First Class Roland W. Nee of the 8th Field Artillery and Corporal John Petrone of the 27th Infantry were among those who told of seeing Japanese planes go down.

For some December 7th 1941 started as "business as usual". While the Japanese planes were strafing Schofield and working in an atmosphere of disbelief, Private James M. Proxmire of the Medical Detachment, 35th Infantry was operating the Regimental Dispensary. Private John R. Nugent of 325th Quartermaster Battalion was waiting for the bus to Honolulu. Sergeant Roger R. Boyer, 65th Engineer Battalion and his battalion commander Major Reeves were about to start a scheduled tour of Pearl Harbor! And according to an entry in Lieutenant George F Carter's memoirs, Lieutenant Mort Loomis, an officer in the 90th Field Artillery Battalion who was on leave, slept through the entire attack in his room at the Royal Hawaiian Hotel in Waikiki.

We have lost almost all of the generation that fought that war and as a result, we will not be able to listen to their stories as told from an indelible memory as if it was yesterday. We can however read their individual stories as a reminder that wars are not a broad swatch of history but a collection of individual stories told by people who were there and thrust into circumstances that most likely shaped the rest of their lives. I can only hope that our elected officials remain aware of the individual sacrifices made when they consider the use of military force. Once committed to its use we should allow the military to do what is necessary in the most effective means possible to complete its mission. In the final analysis it will save lives and preserve freedom.
Go Back