Login to Send a Private Message to Stan Deatherage
A pet peeve of mine has long been how poorly we treat history in our school systems, and, subsequently, in the periodicals that represent who we are. So often young Americans do not know of our past, and because of that sad fact, I fear whom, as a People, we will become.

Because there are Americans, who are purely ignorant of the facts of our past, which often tell the story of abject sacrifice of our forefathers, I wonder to what extent the citizen soldier will rise up to defend their liberty that is now taken so faithfully for granted. At present, we have the world's most competent military to protect us, which provides those who ignore the history of American sacrifice the luxury to be complacent of the sociological value of that sacrifice.

On December 7, 1941, the United States of America was not the world's strongest military; no, far from it. With Europe, north Africa and Asia engulfed in a war in which aggressors: Nazi Germany / Austria and Italy in Europe and north Africa, Japan in all of Asia, terrorized huge swaths of civilian populations, America was still woefully unprepared for certain war. These Fascist aggressors, known as the Axis Powers, enforced a reign of terror upon civilian populations, unprecedented in world history, and yet a majority of Americans desperately wished to remain in "isolation." 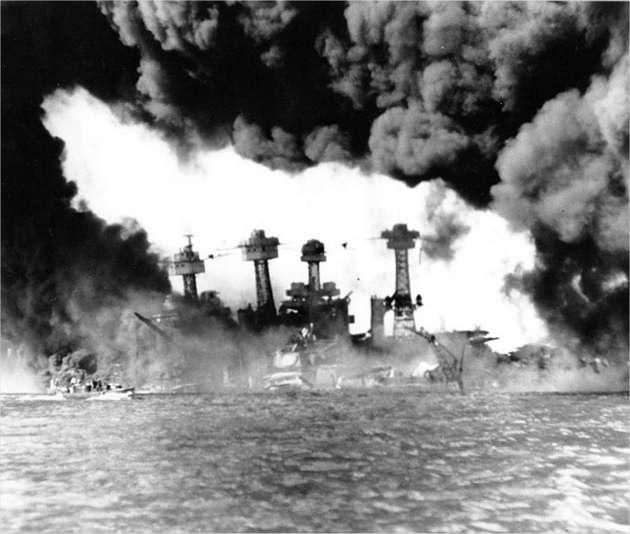 This is the first of many new pictures of the Japanese attack of Pearl Harbor, which I have just uncovered in the Public Domain: The USS West Virginia and USS Tennessee struck by Japanese torpedoes in Pearl Harbor, just a few short miles from Honolulu on the island of Oahu.

This unwise policy of isolationism abruptly ended on that fated Sunday, December 7, 1941. Whether America was ready for war, we were well engaged in those early days of December in late 1941, when the Empire of Japan not only attacked Pearl Harbor, in the United States's Territory of Hawaii, but the American territories and protectorates of the Philippines Islands, Guam and Wake Island. Whether America was resolved to wage total war against the unrepentant evil of these Axis Powers, or not, hundreds of thousands of brave American boys and men volunteered for enlistment the following week after they, as true American patriots, were willfully attacked in a protected harbor, on a distant island, thousand of miles away from this young, ambitious nation.

I still have to question, would this current American nation, which has benefited immeasurably from the valor of this preceding generation, still have that resolve to act as quickly, as honorably, as this "Greatest Generation." I am ambivalent in my conclusion to such a necessary question. I often pray for our future.

In less than two hours, two waves of Japanese dive bombers and torpedoe planes, with fighter support, Mitsubishi Zeros, attacked, unprovoked, the United States's Pacific Fleet at Pearl Habor on the island of Oahu, Hawaii. The this short battle was over, and the remarkable damage done, America was crawling forward to go to war, not only with Japan, but against Nazi Germany as well. It was about time!

Here below is the infamous list of that destruction to American property, and of American life: 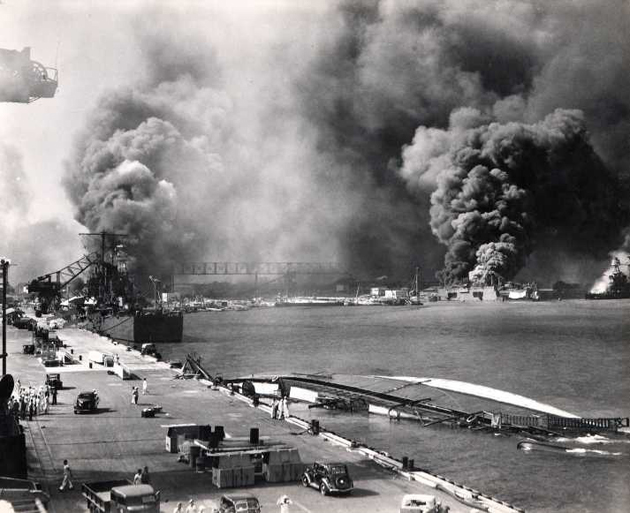 "Battleship Row" ablaze - I believe the USS Oklahoma is capsize in the foreground, where hundreds of sailors were entombed after being trapped and ultimately drowned.