The Turnage Theater in Images: a Retrospect in Melody - Chapter VII | Eastern North Carolina Now | The Barefoot Movement moves into the top slot as one of the best six bands to play the Turnage Theater since June 30, 2009.

The Turnage Theater in Images: a Retrospect in Melody - Chapter VII

Login to Send a Private Message to Wyatt Sanderman Day
The Barefoot Movement moves into the top slot as one of the best six bands to play the Turnage Theater since June 30, 2009.

These chapters of the Turnage Theater, in retrospect, in these rare images offered below, are in chronological order, and if you do not see a show that you were particularly fond of; please, be aware of this one policy of mine - I did not publish images of every performer, only the ones I rather enjoyed. My mother made a deep impression on me: "If you can't say anything nice, don't say anything at all." Additionally, all photos for this article have never been published prior to this post.

Let me go ahead and say this upfront: The Barefoot Movement, just a young group of four young kids - most of them schooled at East Tennessee State in their genre of music, and, for whatever reason considered it appropriate to wear no shoes or socks while performing - was one of the top six performers to play the Turnage Theater since June 30, 2009. These four youngsters, ranging in ages from 19 to 24 years, were remarkably focused in conveying their melodic message at the BoCO Summer Concert Series.

Now that the Turnage Theater is closed, I pray that this quartet of pure talent will be booked on some other stage here in the Beaufort County region. If you were one of the rare music lovers that saw these four young musicians, or have bought their first compact disc, appropriately entitled "Footwork," you should know why I advocate on their behalf.

For all others who read this post, or are reading this series, I have provided 8 videos of The Barefoot Movement, remarkably, 7 of them were recorded at the Turnage Theater. These videos, interspersed throughout this last bevy of photos taken by my photographer and publisher, will help tell the story of just how wonderful this virtually undiscovered young band is. Additionally, these videos, uploaded in October by Tommy Norris - predominately the band's mandolin player - were found after a great deal of effort, on my part, due to the "search algorithmic" of having so few views - the vast majority in the double digit range. After this article, in BCN and other associated NOWS, those view totals should ascend dramatically. 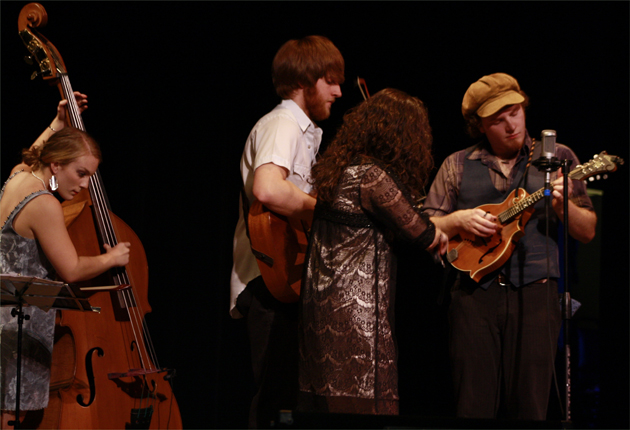 The Barefoot Movement, from left to right: Hasec Ciaccio - Stand-up Bass, Tommy Norris - Guitar, Noah Wall - Fiddle and Vocals, Quentin Acres - Mandolin. Noah Wall launches into an "old time" fiddle riff, such as she did to open "Southfork by Midnight," written by Quentin Acres, who plays the mandolin on this instrumental just below: Below.     photos by Stan Deatherage 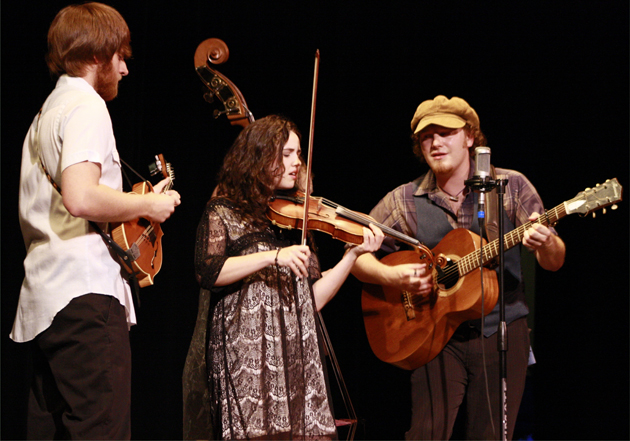 "Southfork by Midnight", performed by The Barefoot Movement and written by Quentin Acre, is no longer available; however, we have a new video of "Second Time Around" with outstanding production values: Above. 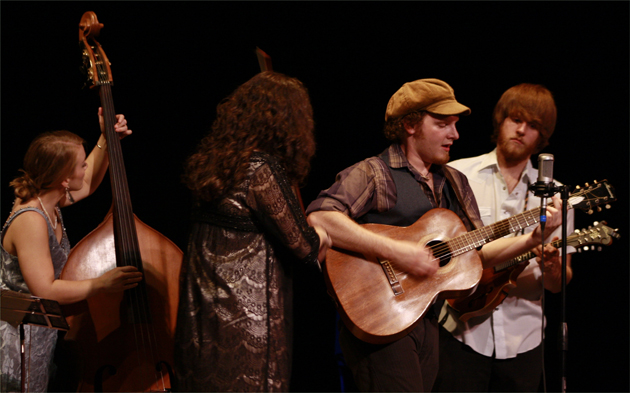 The band finding that harmonic sweet-spot, which was the very nature of their success that July night in 2011 at the Turnage Theater: Above and below.     photos by Stan Deatherage 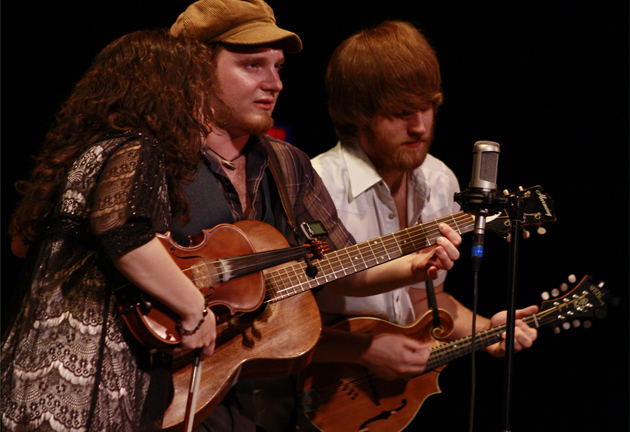 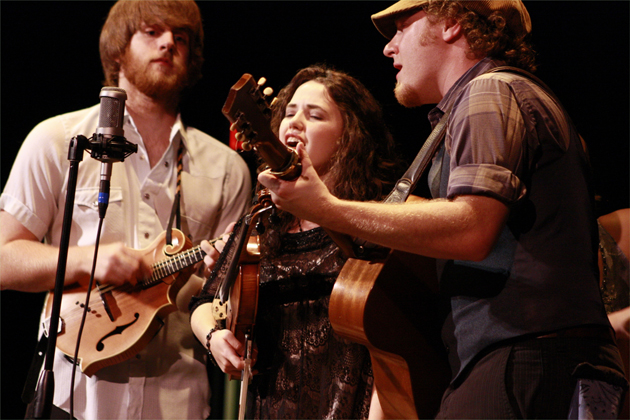 Two of the band members, Tommy Norris (left), mandolin, and Noah Wall (center), fiddle / vocals are from Granville County, North Carolina, and profess to know the subtleties within the arduous life of the small tobacco farmer. I actually know that arduous life, and the 23 year old Noah Wall smacked a bit of reflective truth right into my heart with her ode to a dying world: Above and below, and in the video of "Tobacco Road" just below.     photos by Stan Deatherage 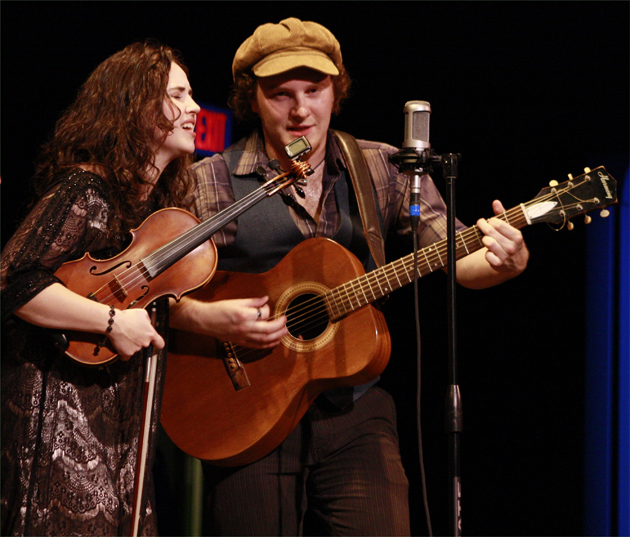 "Tobacco Road," written by Noah Wall, performed by The Barefoot Movement, live at the Turnage Theater July 9, 2011, supplied by Tommy Norris Music: Above. 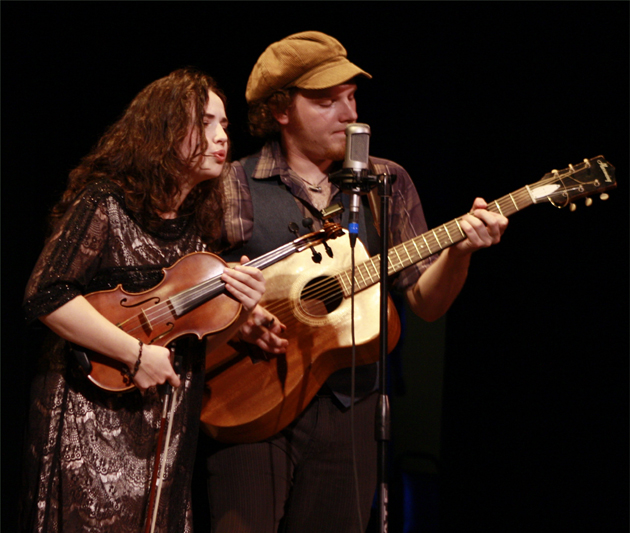 Here we have Noah Wall (left) with Quentin Acres (right): Above and below.     photos by Stan Deatherage

If you like these photos of the songstress, Noah, go back to the video above and listen to "Tobacco Road," if you have not yet fully experienced the video. Quentin supplies his tenor twang to the harmonizing vocals, which introduced an eastern Tennessee mountain flavor to this North Carolina tale of a tradition lost. Tobacco Road is one of those neo-traditional Country tunes that is almost perfect in all respects - like Dolly Parton's "Jolene."

Noah has the precocious sense of a true songstress - writes straight from the heart. Not included in these videos, but listed on The Barefoot Movement's debut compact disc, "Footwork," is her soulful ballad, "Martha's Song," which is a remembrance of the Vietnam War. I don't know how a 23 year old woman can write that song, but she did, and it brought a tear to my eye. You see I was there, and I knew to my core the truth that existed within her lyrics. Noah Wall is truly an "old soul" trapped inside the petite body of a lovely young woman. 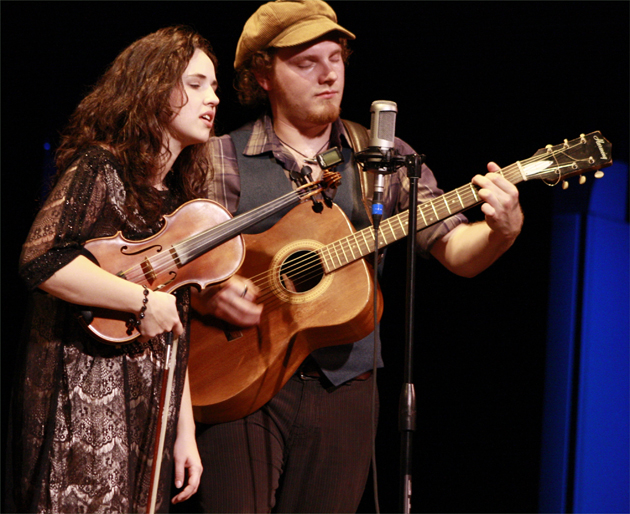