The Conspirator | Beaufort County Now | Mary Surratt may have been a loving mother, but it would eventually kill her. Regardless, President Lincoln was murdered and retribution must be exacted, irrespective of the accused's culpability. 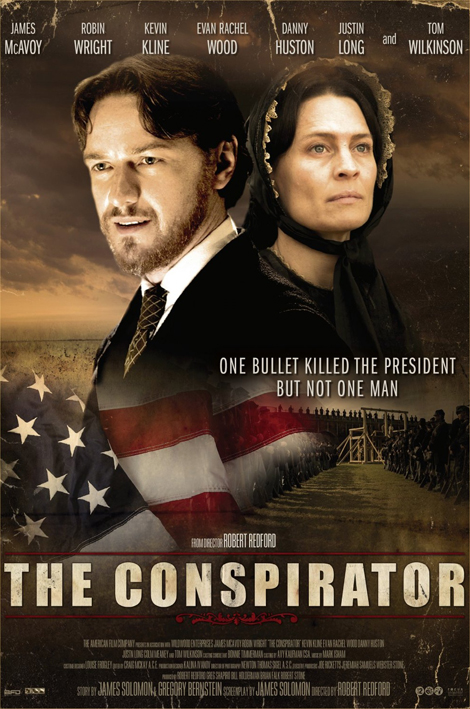 Mary Surratt may have been a loving mother, but it would eventually kill her. Regardless, President Lincoln was murdered and retribution must be exacted, irrespective of the accused's culpability. Mary Surratt's son, John, was culpable to conspiracy to kidnap President Lincoln, but he was far away, hidden by sympathetic priests, therefore someone had to die. Might as well be the mother.

John Wilkes Booth wanted to save the South, so he killed the president, while conspiring with co-conspirators: Lewis Payne, George Atzerodt, and David Herold to kill Vice President Johnson and Secretary of State William Seward. History is written that the popular stage actor, John Wilkes Booth, was successful. Aside from Secretary Seward being gravely wounded by Co-conspirator Lewis Payne, Booth's accomplices were not as successful, and their plan fell far short.

Even though General Robert E. Lee had recently surrendered at Appomattox Court House, Virginia, his subordinate general, Joseph E. Johnston, maneuvered his army far from defeat in North Carolina. Actor John Wilkes Booth, acting independent of the Confederate government, considered that the South could still win. He was wrong, and in the days after the first assassination of an American President was completed, Booth was on the run, hounded by the largest manhunt in American history, with the end result being his death outside of a burning barn in Port Royal, Virginia. 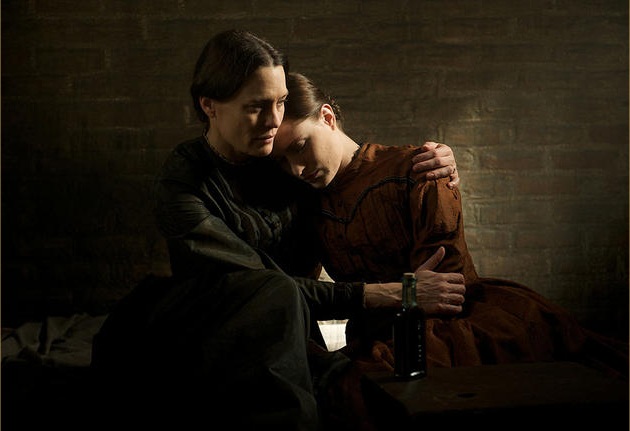 Caught in the crossfire of Actor Booth's deluded state of mind, and his resultant actions, were Dr. Samuel Mudd, who was proved to have treated Booth's broken ankle, while he was on the run in Eastern Shore Maryland, and likewise John Surratt's mother, Mary, were the ideological victims of Booth's transgression - one was imprisoned, the other hanged. Dr. Samuel Mudd was pardoned in 1869 by an outgoing President Andrew Johnson, but his record as a co-conspirator was never expunged. Mary Surratt was not so lucky. This film is almost exclusively her story, and the man who struggle to save her life, while saving a piece of the constitution for everyone else.

Director Robert Redford used a James D. Solomon screenplay of a Gregory Bernstein / James D. Solomon story to tell a well researched and accurate account of the meting out of justice, while a nation teetered in the balance. Director Redford used just over 2 hours to tell this sad tale of how a mother's love may have been the last collateral victim of this bloody war, which tore at the fabric of a young country that would one day become one of the greatest nations in the history of human existence. 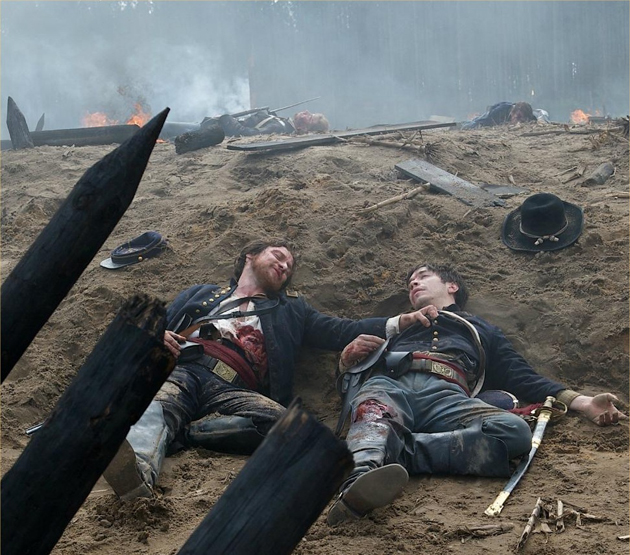 Captain Frederick Aiken, played by James McAvoy, and his friend, Nicholas Baker, played by Justin Long, lie near death on an unknown battlefield in the "War Between the States:" Above.

Upon completion of his duties as a Union officer, Frederick Aiken, made his avocation the law, where he began his short career as a young associate of Maryland United States Senator / Lawyer Reverdy Johnson, played by venerable actor Tom Wilkinson. The former Union Captain's first defense: Defend Mary Surratt as a co-conspirator in the assassination of his beloved leader, in a military court, with no judges and no jury. 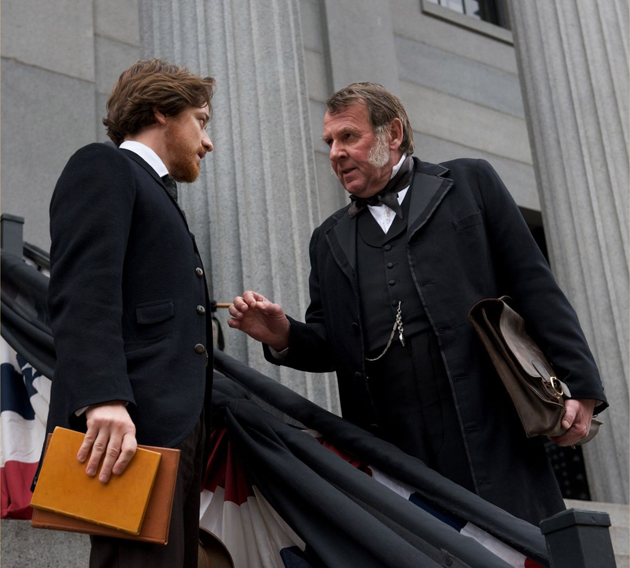 In the initial onset of the trial, the reluctant young attorney, Frederick Aiken, was not remotely convinced of Mary's innocence, nor did he rightly care - his war experiences so near in his memory. What turned the reluctant advocate? 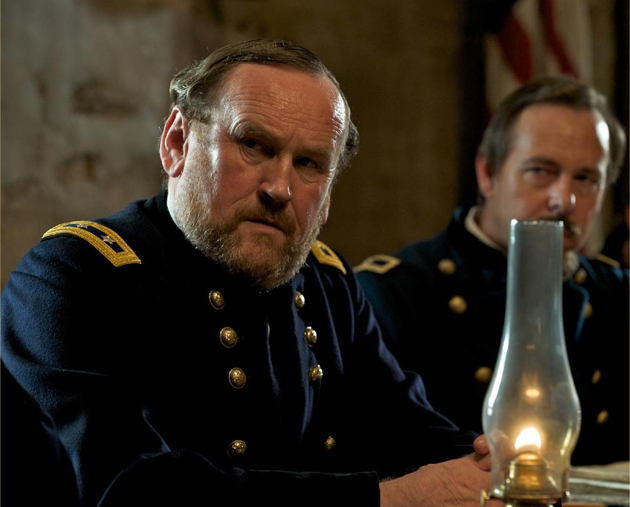 The tribunal of generals, led by General David Hunter, played by Colm Meaney: Above.

There would be no real justice meted out by this military court. Frederick Aiken quickly discovered this, and simultaneously, the young, cynical advocate began to see into his client's Southern heart, and it was not evil, it was not even knowledgeable of the events that transpired between the conspirators at her boarding house. She did love her son, John, and that was her one crime, and once the former Union officer was satisfied of this, he mounted a spirited defense of this poor "woman scorned." Sadly it was too little too late, and actually, would have made not any difference whatsoever in the final accounting of who would live and who would die. The powers at hand demand swift, unmerciful vengeance, irrespective of the truth. 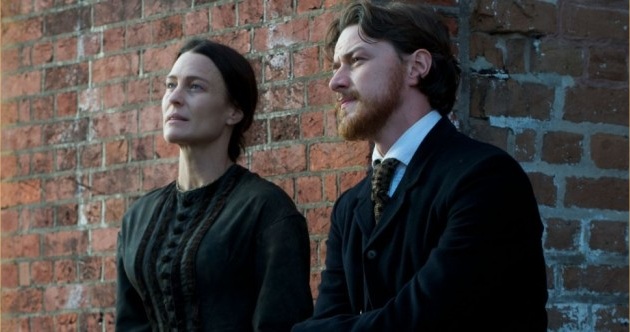 Those sad days in the birthing pangs of this evolving nation, The United States of America, were more about death, and much less about The U.S. Constitution. During the American Civil War, President Lincoln had suspended, with and by the neglect of congress, the Writ of Habeas Corpus - keeping citizens suspected of treason imprisoned without trial. With the war over, Advocate Aiken, sadly, found that the United States Constitution was still suspended - hidden by those who would preserve the Union over that document.
Go Back