Login to Send a Private Message to Wyatt Sanderman Day
Publisher's note: As I am loathe to admit, Wyatt is probably our most read writer. Just a few nights ago, March 12, 2012, I was perusing our sister publication, Better Angels Now, and I noticed that so many of Wyatt's reviews, of the many fine films that occupy the public's interest, have not been availed to our readers through our Beaufort County Now publication.

Consequently, over the next few weeks, we will endeavor to remedy this mild injustice by publishing these reviews, in our current improved format, for your edification. Here below is our sixth in a series of these older articles of interest by our good friend, Wyatt Sanderman Day.

It is Either Up or Down in the Redemptive Process

And in Richard Millhouse Nixon long political career, he has known both. Unfortunately, the redemption he so desperately sought after the fiasco of Watergate evaded his grasp. His desire to use his 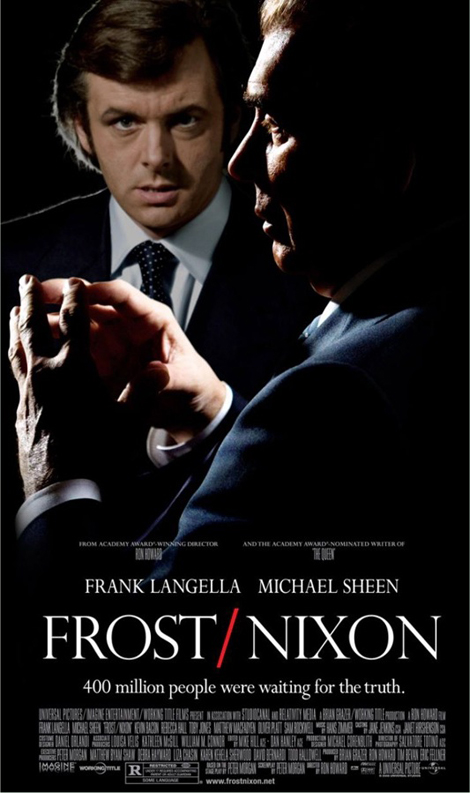 interviews with former talk show host David Frost to explain his administration's orchestrated burglary attempt of the Democratic National Committee's headquarters as a misguided adventure, that was beyond his knowledge, ultimately developed into an admission of guilt, which resulted in an apology to affected members of his ill fated staff, who took the fall, and ultimately an apology to the American People.

As most of you know, the phrase Watergate evolved from the Nixon administrations illegal activities that began that ill fated late spring evening, June 17, 1972, at The Watergate - the mega office / residential complex, in Washington, D.C. near Georgetown. Sadly, the beak-in, and the subsequent multilayered cover up, defined his presidency for many, although it was not the sum of who President Nixon was and what he accomplished. The president that began the normalized relations with China and the former Soviet Union, resigned in disgrace on August 9, 1974.

David Frost on the other hand was a smart young man in the prime of his professional career, but lacked the journalist gravitas to pull off an interview of this magnitude. There were few investors in this production, and even less commercial sponsors to pay the two million dollar production cost of the interviews. While the interviews were being taped, none of the networks would touch Frost's syndicated product. What began as a bullish endeavor from the Frost production team had degenerated into a possible ruinous conclusion near the end of the interview process. The story became as much about David Frost's near certain failure as much as it was about the interviews with the disgraced former president. 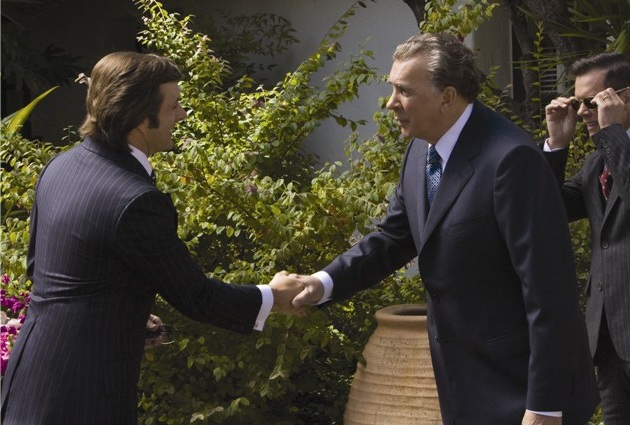 One point made by Director Howard is that Richard Nixon, Frank Langella, was ever the politician, here warmly greeting David Frost, Michael Sheen, on one of their first encounters: Above. Here the former U.S. President warmly greets, disarmingly so, David Forst's researchers: Bob Zelnick, played by Oliver Platt (in the foreground), James Reston jr., played by Sam Rockwell (background). 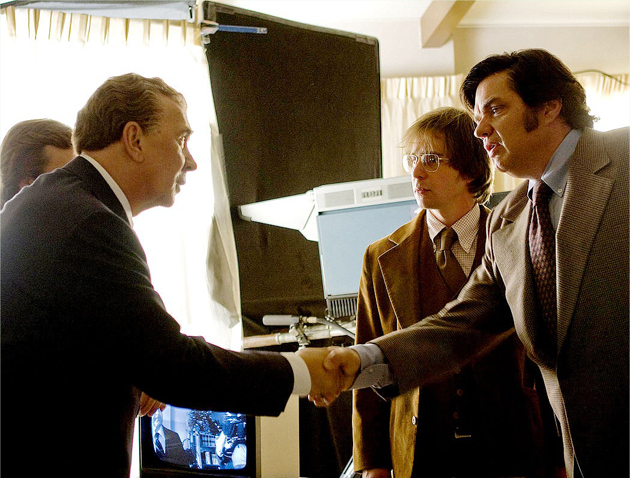 At this point, David Frost could only find redemption in success. Second place would have been no better than a kiss from one's proverbial ugly sister on one's short journey to the ash heap of history and certain bankruptcy. The stakes were high for both parties, and only on party could win: they both new that. 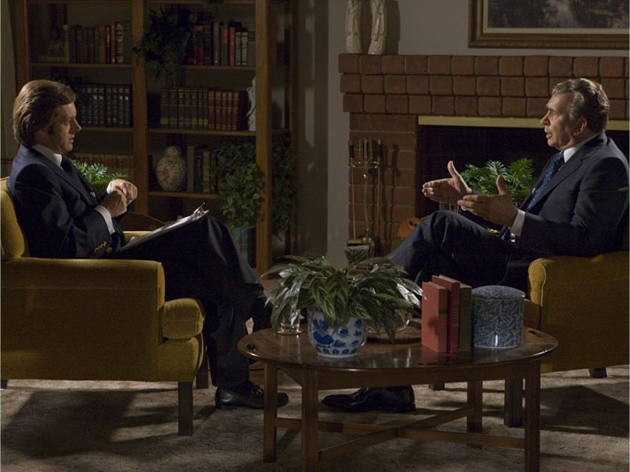 This rapidly planned, poorly financed adventure by David Frost was filmed in the home owned by Mr. and Mrs. Harold H. Smith in Monarch Bay, California. Here the entire negotiated contract of 24 hours of rtaped interviews were filmed, including one more bonus interview, where the disgraced president finally apologized for his part in the Watergate Scandal: Above.

Director Ron Howard was excellent in his interpretation of this standoff between two great egos and how they were effected by the outcome of these four interviews. For great men, there is no greater loss than their credibility and Director Howard captured the essence of that mood for both participants - Frost and President Nixon. 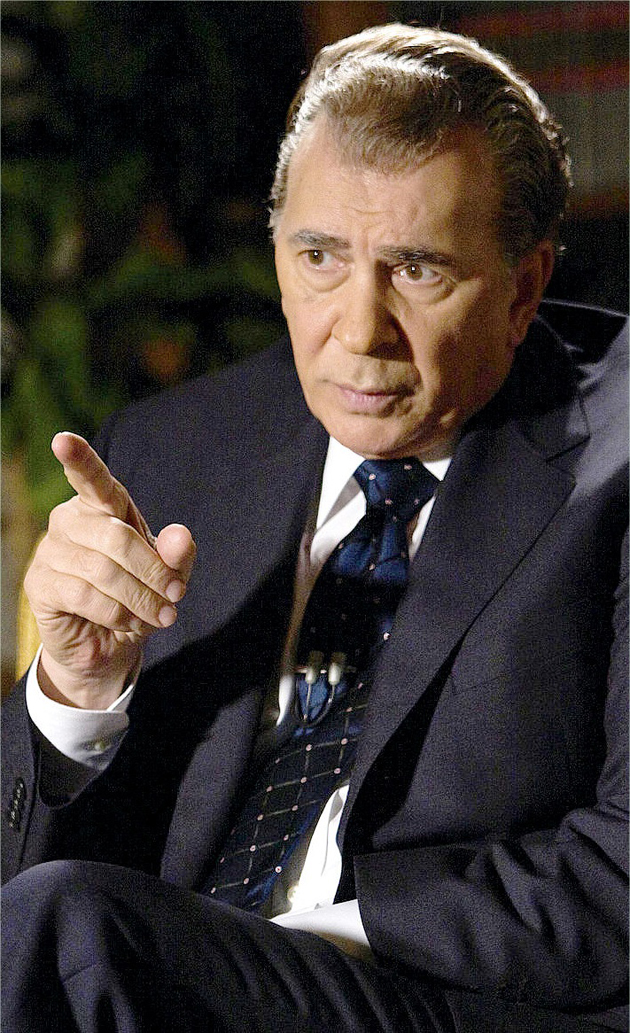 Richard Nixon, as portrayed by Frank Langella, was most assertive in all manner of interaction, even pointing on many occasions: Above. At other times, Langella's version of a marginally charismatic Nixon employed hand gestures to help make his points: Below. 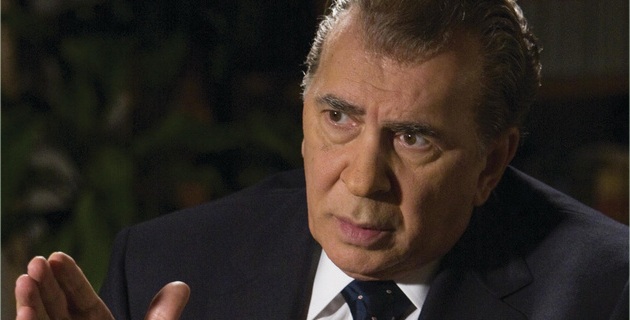