Full Metal Jacket | Beaufort County Now | "Goodbye My Sweetheart, Hello Vietnam" This refrain from Dave Dudley's country ditty, an integral melody in the soundtrack of the classic "Full Metal Jacket" regarding a more patriotic approach to the Vietnam predicament.

This refrain from Dave Dudley's country ditty, an integral melody in the soundtrack of the classic "Full Metal 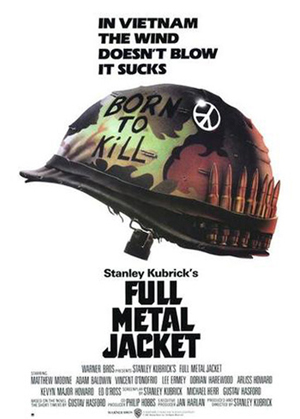 Jacket" regarding a more patriotic approach to the Vietnam predicament, is etched in my subconscious as I reconsider Stanley Kubrick's grim satirical view of the Vietnam War. Reminiscent of Kubrick's classic "Dr. Strangelove," without the Peter Sellers effect, the dark comedy of "Full Metal Jacket" does little to relieve the discomforting reality that the Vietnam War was Hell incarnate. Kubrick uses the film's soundtrack to regulate our level of discomfort, and to keep us hanging on to its bitter conclusion.

In addition to his explicable soundtrack, Director Kubrick uses the incisive dialogue of men living on the edge to bring Vietnam, as a surreal event, into sharp focus.

To which Private Joker, played by Mathew Modine, inquires, "Why should we do a story about you?"

Private Joker, "Any women or children?"

Private Joker, "How can you shoot women and children?" 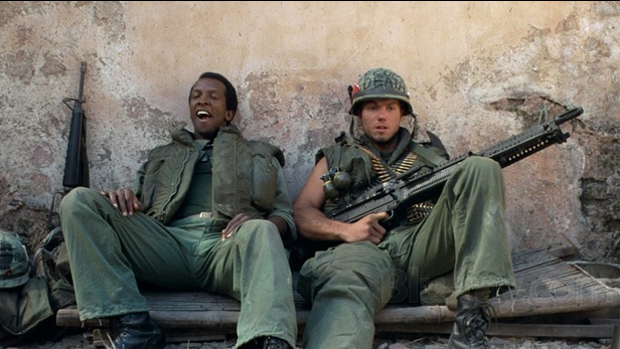 And then, I loathe myself for laughing. That's Kubrick. He's laughing his ass off at us, laughing at his darkly sick humor, and that's his art. It is also his methodology to make films with good, but basically unknown actor. Outside of "Dr. Strangelove" (Peter Sellers), "Eyes Wide Shut" (Tom Cruise, Nicole Kidman), "The Shining" (Jack Nicholson), "Paths of Glory" (Kirk Douglas) and "Spartacus" (Kirk Douglas, Tony Curtis), Stanley Kubrick has been successful making some of his best films, while giving actors an excellent vehicle to enhance their careers. Actors such as George C. Scott in "Dr. Strangelove," Malcolm McDowell in "A Clockwork Orange," and Vincent D'Onofrio's careers were enhanced; but no one has gotten as big of a boost as R. Lee Ermey, 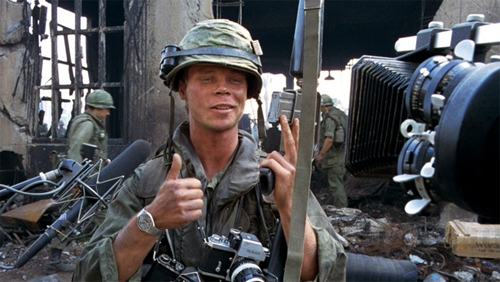 as Gunnery Sergeant Hartman from "Full Metal Jacket." After his portrayal as the barking drill instructor, he has stayed busy, finding good living in acting from War Movies and Dramas to Comedy, and he has been good in all he has attempted.

His role as Sgt. Hartman foreshadowed his range as an actor, in this one character; because his role in forcing his strong will upon these recruits is the best part of a fine film. The catalyst to Ermey's success is his taunt delivery of some very smart dialogue written Kubrick, Michael Herr and Gustav Hasford, who also wroted the novel, "The Short Timers," from which the screenplay was adapted. The screenplay is so good, "Full Metal Jacket" is one of the most often quoted films of all time, with a sample here below of Sgt. Hartman addressing the recruits on Christmas Day:

"Today... is Christmas! There will be a magic show at zero-nine-thirty! Chaplain Charlie will tell you about how the free world will conquer Communism with the aid of God and a few Marines! God has a hard-on for Marines because we kill everything we see! He plays His games, we play ours! To show our appreciation for so much power, we keep heaven packed with fresh souls! God was here before the Marine Corps! So you can give your heart to Jesus, but your ass belongs to the Corps! Do you ladies understand?"

Finally the film moves to Vietnam, with the some of the recruits getting their first taste of action, with most of that action occurring during the Tet Offensive conducted by the Viet Cong, when they overran the entirety of South Vietnam, with some of the heaviest 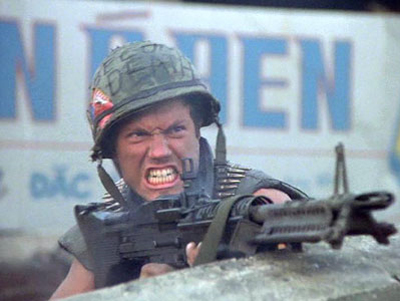 action in and around the old imperial city of Hue. This where the film takes a very violent turn, with Adam Baldwin powerful punch as the malevolent Animal Mother, and ultimately concludes, so I'll stop right here, except to say: if you enjoy the drama engendered by war see this film. If you were offended by the quotes supplied to this review, be forewarned; there is much more dialogue, that is much more brutal than published here.

For me, this is one of Stanley Kubrick's best films, in that its satire represents a fair perspective of the public's perception of this misbegotten war, without being preachy. The film has stood the test of time. It is a classic.