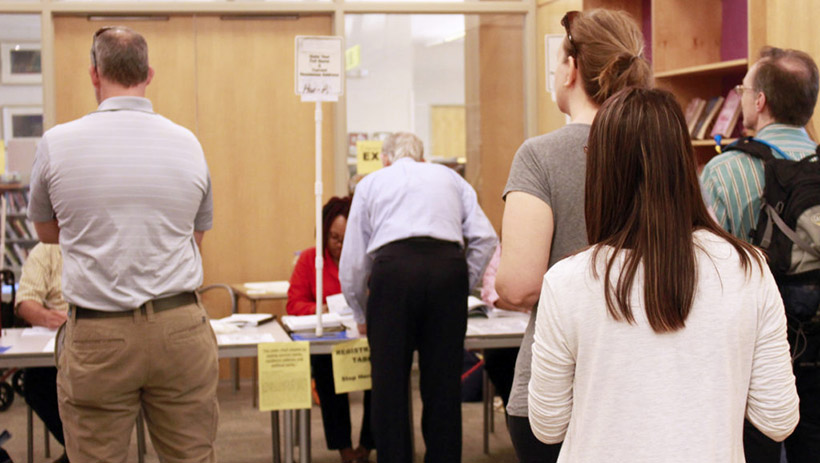 U.S. District Court Judge Loretta Biggs and Magistrate Judge Patrick Auld issued a notice Thursday, Dec. 26, saying the court will put the law implementing the constitutional amendment on hold. They're presiding over a lawsuit challenging the law requiring voters to present a state-approved form of identification at the polls. The court said it will issue an order next week.


What happens next is anyone's guess. The defendants in the lawsuit who have standing to file an appeal may choose not to, jeopardizing the voter ID requirement for the March 2020 primary.

The N.C. chapter of the NAACP filed the lawsuit a year ago, saying the 2018 implementing law was too much like earlier voter ID attempts that were ruled unconstitutional. Senate Bill 824 became law Dec. 19, 2018, over Gov. Roy Cooper's veto.

But in its lawsuit, the NAACP didn't include the General Assembly among the defendants, even though legislators passed the law being challenged. The only defendants are Cooper (who vetoed S.B. 824) and the members of the State Board of Elections.

Legislative leaders asked the court in January to join the lawsuit. Biggs rejected the request, saying the elections board could defend the law.

Pat Gannon, spokesman for the elections board, said in an email Attorney General Josh Stein may have to make the next move. Unless the board requests an appeal, Stein (representing Cooper) could be the last defendant standing.

Laura Brewer, a spokeswoman for Stein, said in an email the A.G.'s office will review the order when it's issued before deciding what to do.

Republicans and legislative leaders lashed out at the court and urged Stein to jump in.

"Unfortunately, this preliminary injunction is yet another example of judges legislating from the bench. This action, if it is allowed to stand, will invalidate the votes of millions of North Carolinians who voted overwhelmingly to implement voter ID and strengthen the integrity of N.C. elections. The NCGOP calls on the Attorney General to appeal this decision and defend the voters of North Carolina," said Jeff Hauser, spokesman for the N.C. Republican Party.

"To issue an injunction against one of the nation's most lenient voter ID laws - which 34 states already have - without providing an opinion is an outrageous affront to due process, the rights of North Carolina voters, and the rule of law," Moore said in a statement.