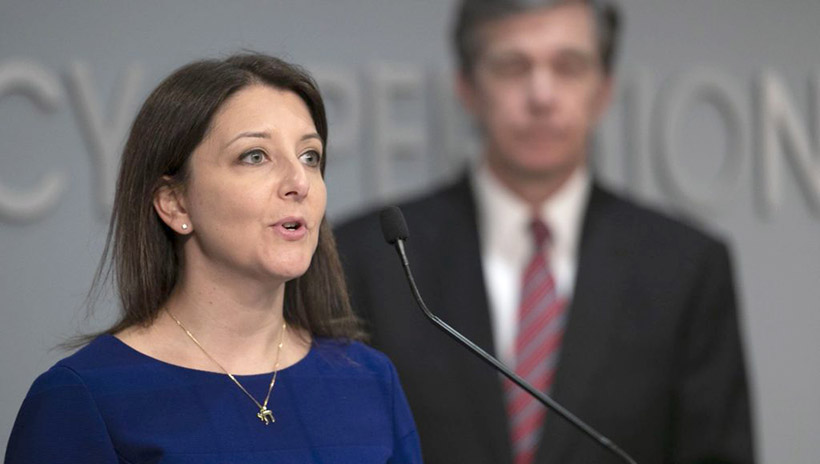 As COVID-19 cases and hospitalizations rise across North Carolina, key parts of the state's science and data remain inaccessible to the public.

"North Carolina is relying on the data and the science to lift restrictions responsibly, and right now our increasing numbers show we need to hit the pause button while we work to stabilize our trends," Gov. Roy Cooper said June 24 when he announced the modified Phase Two restrictions. Phase Two — which allows limited indoor restaurant dining while keeping bars, gyms, fitness centers, and bowling alleys, among other places closed — won't be lifted before Aug. 7.

The lives and livelihoods of millions of North Carolinians depend on that science and data. But researchers say critical information is incomplete, unclear, or unavailable.

But the true COVID-19 case count remains uncertain with renewed test shortages and without random testing. Infections could be 10 times higher than the state's tally. Deaths and hospitalizations lag weeks behind cases, and not all hospitals report COVID-19 patients. Publicly available data on hospitalizations and hospital capacity remain limited.

North Carolina offers interactive data when it comes to COVID-19 cases and deaths. But the state doesn't require hospitals to report COVID-19 patients, and it doesn't break down hospitalizations for the public.

Transparent hospitalization data is crucial to fighting the virus. Without this data, reopening the economy and preventing unnecessary deaths becomes that much harder, researchers say.

"We can't understand it properly because of the lack of this data," said Pinar Karaca-Mandic, University of Minnesota professor and project lead of the national Hospitalization Tracking Project.

Here's a look at the state's science and data, what the public knows, and what it doesn't:

How reliable is the daily COVID-19 case count?

North Carolina confirmed 91,266 cases of COVID-19 as of July 15, but, based on the number of reported recoveries, the actual number of active cases is closer to 18,894. Still, actual infections could be up to 10 times greater than the state's count, according to estimates by the Centers for Disease Control and Prevention.

North Carolina has completed almost 1.3 million coronavirus tests. Each case represents one person, even if that person ordered multiple tests, according to the dashboard of N.C. Department of Health and Human Services.

The state grappled with testing shortages for months, and it limited testing to patients with symptoms. Researchers believe the bottleneck hid the true number of coronavirus cases.

"The testing delays are a huge problem," Karaca-Mandic said. "If today I'm seeing the data that was collected seven days ago, it doesn't help me."

The state graphs cases by the date of reporting and by the date of testing. Longer turnaround times affect all case counts during July, the state's dashboard says.

"I don't trust case counts. I hardly look at them, except to see if they are moving in a particular direction," said Julie Swann, head of the Department of Industrial and Systems Engineering at N.C. State University. She was a science adviser for the CDC's H1N1 pandemic response.

How many people have COVID-19?

The state says 8% of COVID-19 tests are coming back positive. But don't rely on that estimate, researchers say.

The percentage of positives reported is based from a sample size that's smaller than the total tests reported. The data behind the 8% figure isn't publicly available.

Without randomized testing, it's difficult to know how many people have the virus. Current testing is skewed toward those showing symptoms and the sickest, says Karaca-Mandic.

The positivity rate is also influenced by targeted testing. The state aims testing at people who are most vulnerable to get COVID-19, including those in nursing homes and minority communities. But targeted testing could obscure how far the virus has spread in the community, Karaca-Mandic said.

"That rate by itself doesn't tell much about the true rate of infection," Karaca-Mandic said.

Does the state know many people are hospitalized with COVID-19?

Do hospitals have capacity?

Yes. As of July 15, 24% of inpatient hospital beds were empty, along with 19% of intensive care unit beds. There were 2,436 ventilators available.

Hospital admissions lag behind infections, as the virus can take weeks to make people sick enough to go to a hospital. The impact of today's case count on hospitalizations will manifest itself in two weeks or more.

Patients with COVID-19 occupied 5.4% of the state's 21,114 staffed inpatient and ICU beds reported on July 15. The state doesn't tell the public how many of those patients are in general hospital beds or intensive care units. It also doesn't identify the location of patients in hospitals with the virus.

Nor does it publicly break down hospital capacity to show where the virus could overwhelm the health care system. The capacity of rural and urban areas exists under the same data umbrella.

Are hospitalizations spiking or staying flat in my county?

How many people have recovered?

The state says 67,124 patients were presumed to be recovered on Monday, July 13. The state publishes its estimate of the number of people recovered from COVID-19 symptoms every Monday.

That active case count reflects how the virus is spreading within North Carolina, says Rachel Graham, assistant epidemiology professor in the Gillings School of Global Public Health at the University of North Carolina at Chapel Hill.

The day-to-day change in cases gives the most accurate picture of community spread, said Graham. North Carolina reported a 1,782 increase in cases since Tuesday, but test shortages complicate even that number.

"Total cases is just one metric, and one should look at the different metrics together — percent positive, hospitalizations, etc. — and not only look at one metric," said Kelly Conner, spokeswoman for NCDHHS. "You need all of them to see the whole picture."

What do officials mean when they say a patient has recovered?

Unsure. The state's definition of recovered says that patients no longer have symptoms, but the data behind the estimates isn't publicly available. NCDHHS did not respond to requests for comment.

Is the state breaking COVID-19 data down by race or ethnic group?

Yes and no. Deaths and cases get reported by race, ethnicity, age, gender, and county. Hospitalizations don't.

African Americans accounted for roughly 24% of cases and 33% of North Carolina's 1,568 deaths. By ethnicity, Hispanics made up 44% of cases and 10% of deaths. But researchers can't see how ethnicity, race, or gender affects patients' odds of being hospitalized.

Yes - for infections and deaths, but not hospitalizations.

Demographics have shifted since the beginning of the outbreak. More younger people are getting the virus, with 69% of confirmed cases in people younger than 50.

How long is average hospitalization over time?

Unclear. The state doesn't release this data. But it estimates the median recovery time for hospitalized COVID-19 patients as 28 days from the date of COVID-19 testing.

Can I track COVID-19 cases by ZIP code or county?

Yes. The state began publishing COVID-19 cases by county and ZIP code in May. That data shows only lab-confirmed cases.

Are patients diagnosed with COVID-19 but hospitalized for something else getting counted toward the state's COVID-19 hospitalizations?

Yes. Hospitalizations include patients admitted to the hospitals for other reasons who tested positive for COVID-19 and who were placed on infection prevention precautions.

"When you think about the role of elective procedures, a lot of our health systems are doing pre-screening. They'll screen you as an outpatient then depending on the results they make a decision on whether this is the time to do an elective procedure or not," Dr. Betsey Tilson, the state's chief medical officer, said during a June press briefing. "So [the classifications] may be playing a small role. But I don't think it's playing the majority of the role."

What about other deaths that aren't reported as COVID-19?

Unclear. All-cause deaths provide a window into unreported COVID-19 deaths and how delays in care affect mortality. North Carolina relies on a paper system of reporting death certificates, and it's one of three states without an electronic registry.

In the CDC's data charts on excess deaths associated with COVID-19, North Carolina's section warns "data in recent weeks are incomplete. Only 60% of death records are submitted to NCHS within 10 days of the date of death, and completeness varies by jurisdiction. Weights may be too low to account for underreporting, numbers of deaths are likely underestimated."

Can I see if the virus is spreading in schools or child care settings?

Yes. North Carolina has linked one cluster with six cases to schools, and another 11 clusters with 83 cases to child care. Residents can also find where the clusters are by county. The state updates this data Tuesday and Friday.

Is the state tracking the virus' spread in nursing homes?

There were 136 outbreaks in nursing homes and another 92 in residential care facilities. Together, they tallied 6,672 cases and 845 deaths.

Yes. There are 1,920 cases and 31 deaths in correctional facilities. The state launched a plan to test all 31,000 offenders for COVID-19 over 60 days, starting in June.

What about meatpacking plants? Or agricultural workers?

Yes and no. The state publishes a weekly report of cases within congregate living settings, including in homeless shelters and migrant worker housing. The numbers don't include farmworkers who live in private residences. The report doesn't name the farms with outbreaks.

The most recent report says "there are no cases or evidence of COVID-19 transmission through food handling, packaging or processing." The state previously released a list of outbreaks and case counts at meat processing plants by county without naming the specific plants.

What else is the state doing to track COVID-19?

The state is tracking symptoms of COVID-19 using systems developed for the seasonal flu. Called symptomatic surveillance, the network relies on reporting from emergency rooms. It only flags those who seek care. The state also employs contact tracers, who look for people who have been in contact with people infected with the virus, but delays in test turnaround times will hinder their work.