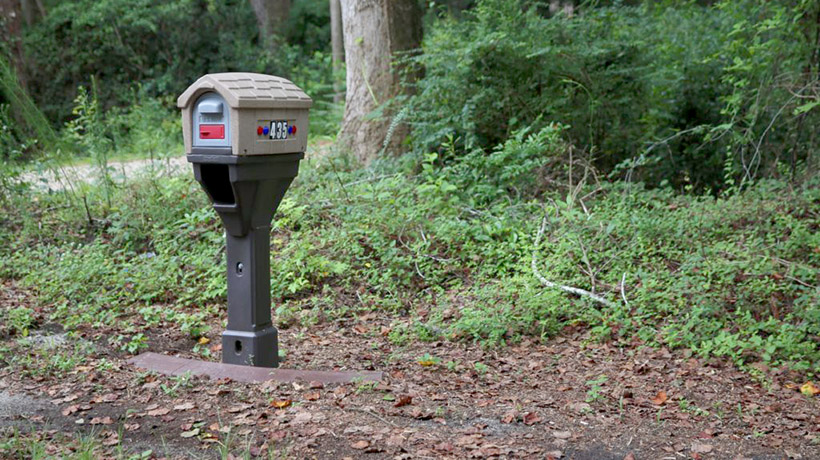 The mailbox at 435 Poplar Hill Road, Fayetteville. Sen. Ben Clark and Dion Clark built a house there in 2016 but have never claimed it as a residence. | Photo: Don Carrington / Carolina Journal

A 2,367 square-foot house, built about 2016, sits deep in the woods off Poplar Hill Road east of Fayetteville. You can't see the house from the street. Signs in the driveway say, "Smile. You're on camera."

Robert "Ben" Clark is a Democratic state senator. Since 2013 he's represented District 21, encompassing all of Hoke and part of Cumberland county. Ben Clark's wife Dion is a spokeswoman for State Auditor Beth Wood. In 2015, the Clarks bought the land where the house sits. About two years later, they borrowed more than $200,000 to build the house.

It sits outside District 21.

The Clarks say they don't live at 435 Poplar Hill Road. They're registered to vote at a house in Raeford, where Ben's parents live. It's in Senate District 21.

But two years ago, a District 21 voter challenged Ben Clark's residency. Spring Lake Mayor Pro Tem James O'Garra said Clark lived on Poplar Hill Road, not in Raeford with his parents. O'Garra's challenge was rejected by a three-member panel of elections board officials from the district. The State Board of Elections upheld the ruling on appeal. Clark won his fourth term and is running for a fifth.

When Clark won, that should have ended any worries about his qualifications to serve another term in the General Assembly. State law says residency challenges like the one he faced must be filed within 10 days of the date candidate filing ends.

But the Clarks may not be off the hook. Carolina Journal has found information suggesting for several years the Clarks may not have been truthful in the home addresses they filed with local and state election officials. If the Clarks were registered to vote at a place they didn't reside and cast ballots under that false address, any registered Hoke County voter could challenge their residency. Their possible offense, if proven, would be making a false affidavit, a Class I felony.

CJ spoke with O'Garra, who still thinks the Clarks don't live in the district. Neither Ben nor Dion Clark responded to CJ's requests for comment.

The N.C. Constitution requires voters to be a resident of the state and of the electoral district where they vote. It also requires candidates for the General Assembly to live in the district they hope to represent for at least one year before a November general election. Public records show the Clarks may not have met those requirements. They've used three different home addresses since 2016. Two are outside Senate District 21.

Ben and Dion Clark are registered to vote at 603 East Lake Ridge Road, Raeford, where his parents live. In 2015, Ben and Dion Clark bought land and in 2016 built a house at the Poplar Hill Road address. It's in Senate District 19.

In July 2015, Dion Clark changed her voter registration address from a house she owned in Pine Level to the Raeford address. In 2017, when the Clarks sold the home in Pine Level, they signed a deed stating the property was their primary residence. Pine Level is near Selma and the house was in Senate District 10. It will be in District 11 for the 2020 election.

At an April 2018 hearing challenging Ben Clark's residency, O'Garra's lawyers asked Clark if he lived at the Fayetteville house. "I've stayed there, but that is not my primary residence. I maintain my primary residence at 603 East Lake Ridge Road. Yeah, I have spent some nights there, of course," Clark said.

If someone challenged the Clarks' residency, it would have to be done more than 25 days before a primary, general, or special election. It's also possible to challenge a voter's eligibility on the day of an election and to challenge absentee ballots.

In 2007, State Board of Elections General Counsel Don Wright released a paper titled "Residency for Election Purposes." It was directed at issues brought to county election boards.

Wright said that "residence," as used in the Constitution, is synonymous with "domicile." But residence and domicile are not interchangeable. A person may have a temporary residence in one place and a permanent, established domicile in another. A domicile is the place the person considers home. The law, he said, requires all persons to have only one domicile for voting purposes.

An attack on the residency of a voter or candidate is handled as a challenge. The procedures are in Chapter 163 of the N.C. General Statutes. A challenge doesn't have to strictly follow the N.C. Rules of Evidence. Direct and circumstantial evidence that's relevant to the issue being proved should be allowed, Wright said.

"The determination of domicile depends upon no one fact or combination of circumstances, but upon the whole, taken together, showing a preponderance of evidence in favor of some particular place of domicile. A person's own testimony regarding his intention with respect to acquiring or retaining a domicile is not conclusive: such testimony is to be accepted with considerable reserve, even though no suspicion may be entertained of the truthfulness of the witness. ... Conduct is of greater evidential value than declarations. Declarations as to an intention to acquire a domicile are of slight weight when they are in conflict with the facts."

A timeline, based on public records and online documents, may offer insights into the Clarks' conduct:

Aug. 3, 1994: Ben Clark granted a power of attorney for real estate transactions to his father. The power was effective for one year. At the time, Ben was stationed overseas with the U.S. Air Force.

Sept. 7, 1994: Ben Clark, through his father's power of attorney, sold his one-half interest in the Raeford property to his father and mother. Tax records show a house was built in 1995.

2005: Ben Clark registered to vote in Hoke County using 603 East Ridge Road, Raeford. as his address. He has used the address on all campaign filings since he first ran for the Senate that year.

August 2015: Ben and Dion Clark purchased 3.63 acres of vacant land on Poplar Hill Road outside of Fayetteville, but with a Fayetteville mailing address. In December 2015, they bought a 4.98-acre parcel adjoining the 3.63-acre parcel. The land is about 20 miles from the Raeford address where Clark's parents live.

Jan. 27, 2016: Ben Clark filed a Statement of Economic Interest stating that as of Dec. 31, 2015, he and his parents each owned a one-third interest in the Raeford property, even though he had transferred his interest to his parents in 1994. He also stated that he and his wife owned property in Fayetteville and Pine Level.

2016: The house on Poplar Hill Road in Fayetteville was finished.

Feb. 6, 2017: Ben and Dion Clark signed a deed of trust borrowing $202,500 from the State Employees Credit Union for the 435 Poplar Hill Road property. The document states they must use the property as a principal residence for at least one year, "unless extenuating circumstances exist which are beyond borrower's control."

June 20, 2017: Ben and Dion Clark sold the house in Pine Level. Both signed the deed. It includes a clause where they indicated "all or a portion of the property herein conveyed ... include[s] the primary residence of a grantor." Campaign finance reports covering that period listed Clark's address the house in Raeford. CJcouldn't determine if the Clarks lived in Pine Level while the new house in Fayetteville was being built.

Aug. 18, 2017: Dion Clark filed an incorporation document with the N.C. Secretary of State for the Caesarea Worship Center Inc. She listed her address and the corporation's principal address as 435 Poplar Hill Road, Fayetteville. The Caesarea website features Dion as the senior pastor/teacher and "Brother" Ben Clark with no particular role. She still had Ben's parents' address Raeford listed with the Hoke County Board of Elections as her residence.

March 2018: Ben Clark signed an affidavit stating, "I am the legal owner and resident of a home in Hoke County which is located at 603 East Lake Ridge Road, Raeford, North Carolina, 28376, on 6 acres of lake front property with no mortgage." This was incorrect. He had transferred ownership to his parents.

May 3, 2018: The State Board of Elections convenes a hearing including O'Garra's challenge to Clark's residency. When O'Garra's attorney asked Clark about the residency requirement at the initial hearing, Clark said that the requirement only applied to his wife, not to him. He explained that she was the borrower and he was a co-borrower. The hearing also addressed Clark's attempt to get his new house on Poplar Hill Road gerrymandered into District 21. Evidence in a redistricting lawsuit listed Ben Clark's address as 603 East Lake Ridge Road, Raeford. A footnote staetd: "Sen. Clark provided a second address to the Senate Redistricting Committee during the 2017 legislative redistricting process and indicated that he intends to move there. That address is 435 Poplar Hill Road, Fayetteville, NC 28312." The General Assembly's Republican majority agreed to Clark's gerrymander. But, as CJ reported, a special master threw out that revision and a federal three-judge panel kept the Poplar Hill Road house in District 19.

May 18, 2018: Ben Clark's parents transferred a one-half interest in their Raeford home to Ben.