Outcome of Chief Justice Race May Depend on State Election Board’s Independence | Beaufort County Now | The ballots have been counted. Twice. Some will be counted again. Maybe all of them. | carolina journal, chief justice, cheri beasley, paul newby, election board, independence, december 7, 2020

Published: Thursday, December 10th, 2020 @ 10:48 am
By: Carolina Journal   ( More Entries )
Publisher's Note: This post appears here courtesy of the Carolina Journal. The author of this post is Rick Henderson. 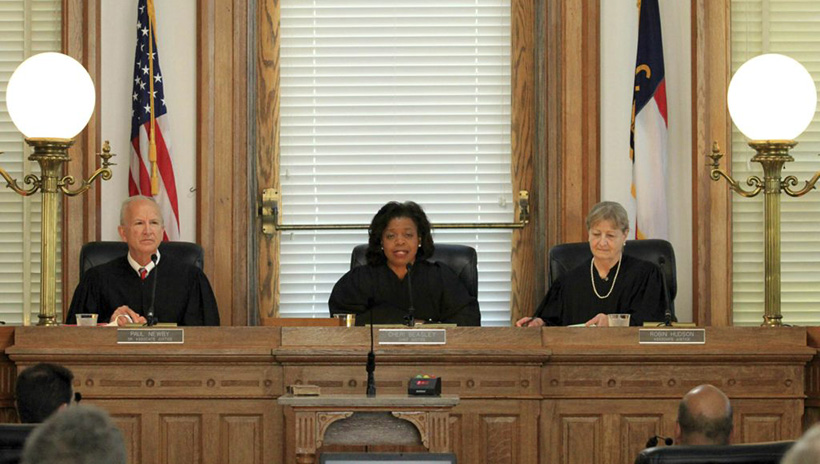 The ballots have been counted. Twice. Some will be counted again. Maybe all of them. Even after that, North Carolinians may not know who will be the chief justice of the state Supreme Court in 2021.

Associate Justice Paul Newby, a Republican, defeated incumbent Democratic Chief Justice Cheri Beasley for the chief's seat in the unofficial election night tally. He prevailed after county canvasses, and a recount. The results were close, with only 401 votes separating the candidates after the first recount wrapped up in early December.

But Beasley refuses to concede. She asked the State Board of Elections to perform a manual sample recount of 3% of the precincts in each county. It's her legal right to do so. The "hand-eye" recount might turn up issues with voting scanners and allow a manual recount of all 5.39 million ballots cast.

The state elections board also has scheduled a hearing Friday, Dec. 18, to consider protests filed by the two candidates. County elections boards were asked to hold any protest hearings no later than Dec. 9, with written orders filed by Dec. 11.

Even if Newby survives all the recounts with a lead, the fate of the election will sit with the Democrat-majority state elections board. The Beasley team filed 92 county protests, according to the state Republican Party and elections board records. The chief justice's lawyers are asking the state board to reverse decisions made by county boards, also with Democratic majorities, and include Beasley ballots or reject Newby ballots that were handled by local officials.

The outcome will test the board's independence.

"The seemingly never-ending chief justice's race reminds us that North Carolina's statewide election apparatus is run by a board dominated by Democrats," said Mitch Kokai, John Locke Foundation senior political analyst. "Republican legislators tried more than once in recent years to transform the state elections board into a bipartisan outfit, but state courts foiled those efforts. So now every decision this board makes will face extra scrutiny. Observers will look for signs of partisan bias. It's hard to imagine that any outcome favoring Beasley could escape accusations that Democrats have twisted the rules to benefit one of their own."

"Of the 92 Beasley county protests filed, nearly 70 have already been dismissed by the Democrat-controlled county boards. Not a single county has upheld the Beasley protests in an evidentiary hearing. According to county boards and publicly available data, a large percentage of the Democrat votes the Beasley campaign is attempting to revive through protests were counted during the county canvas process and the others were lawfully denied," Whatley said.

As we've reported, who sits in the chief justice's seat matters:


If Newby wins, Republicans can claim a clean sweep in this year's statewide judicial races. They won all five Court of Appeals contests and two other Supreme Court races. Those were by more comfortable margins, ranging from roughly 70,000 to 190,000 votes. A Newby victory would give the Supreme Court three Republicans and four Democrats. Republicans took control of the Court of Appeals, holding nine of the 15 seats. Democrats had an 8-7 majority in the past year's session.

The victories were a major upset. A Civitas Poll released in late October — one of the few public polls on judicial races in N.C. — showed Beasley with a nine-point lead over Newby. An analysis of television ad buys from the Brennan Center for Justice showed Republicans were outspent 7-1.

A Newby win also would sustain a record that's held since North Carolina's 1971 Constitution was ratified. No recount has overturned a statewide election.

Here's how the race played out. Newby led the unofficial election night count by 366 votes. He picked up a handful of votes during the county canvasses.

Beasley's protests are identical. Each claims there were flaws in the count and/or violations of elections laws "sufficient to cast doubt on the apparent results of the election." The same voter information for all counties is included in each protest. Her lawyers didn't tailor the protests for different problems in individual counties.

Newby's legal team filed separate protests, challenging absentee ballots that may have had errors, missing signatures, incomplete addresses, or other flaws that legally could prevent them from being counted.

The county and state elections boards will decide these protests.

Since the margin and the end of the county canvasses was less than 0.5% (0.0077%, to be precise), Beasley requested a recount. After the recount, Newby's lead shrank by 15 votes.

The 3% hand-eye recount is next.

In a blog post, Andy Jackson, elections analyst for the Civitas Institute, explained how.

"Every county will have to do a hand recount in at least one precinct or early voting site (voting location)," he wrote. The number of precincts recounted will move up based on how many locations are in the county:


Mailed absentee ballots would be included in the precincts where the voters live.

If the recount changes enough votes to potentially overturn the election, by extrapolating the difference to include all votes cast, then the State Board of Elections would recount all the ballots in that race by hand.

With a margin of 401 votes, Beasley wouldn't have to pick up many votes to get a full recount, Jackson wrote.

He estimates a little more than 161,000 votes will be recounted in the 3% sample. Beasley would have to net a mere 13 votes to get a full recount. If she gains fewer than that, or if Newby picks up any votes, Newby should win.

But because the state board will decide whether Beasley's protests prevail, it may not matter if Newby won a dozen recounts.

While the winner of the election could have a big impact on N.C. law and policy, the courts should be able to operate without any serious disruptions if the challenges persist, says Mike Schietzelt, a constitutional law fellow at Regent University School of Law. Schietzelt, a former John Locke Foundation legal analyst, worked for former N.C. Chief Justice Mark Martin, who's now dean of the law school.

The chief justice is the state's top judicial administrator, appoints the chief judge of the Court of Appeals, picks judges for the Business Court, and handles other duties outside the courtroom.

When the court's new term begins Jan. 1, six of the seven justices will be in place — Democrats Robin Hudson, Sam Ervin IV, Anita Earls, and Mike Morgan; and Republicans Phil Berger Jr. and Tamara Barringer. The state constitution says when the chief's spot is open, the senior associate justice, in this case Hudson, would assume the duties of the chief until the slot is filled.

"Justice Hudson has served 14 years on the court, and she'll have administrative support from the [Administrative Office of the Courts] and the administrative staff at the court. I suspect she'll be prepared to assume those duties without a hitch should the need arise," Schietzelt said in an email to Carolina Journal.