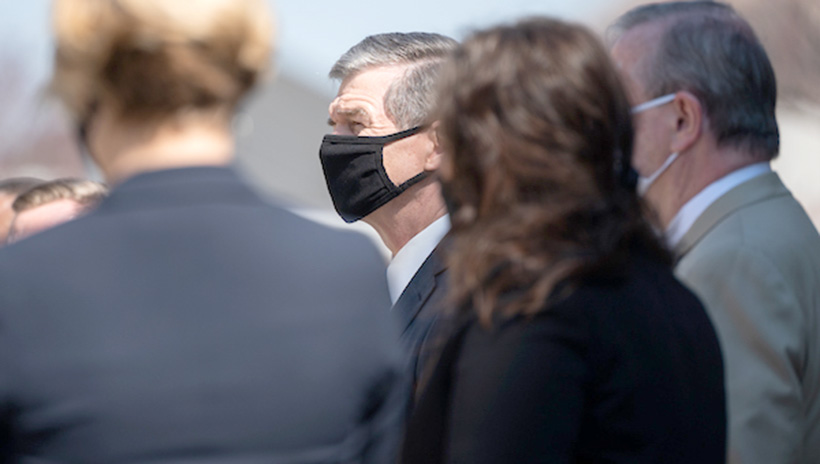 Gov. Roy Cooper introduced a $55.9 billion budget proposal on Wednesday, March 24, that includes many of the goals he's had since taking office. But this time he claims they're needed due to the COVID pandemic.

These goals include expanding Medicaid, borrowing $4.7 billion for infrastructure projects, and pushing state agencies to look at issues through a "justice and equity lens."

"We'll put this pandemic behind us sooner rather than later. With the right investments, we can ensure our state roars back, creating opportunity for all of our people, not just those at the top," Cooper said during a news conference outlining his budget proposal. "This is the time to find opportunity in crisis."

Republicans, however, criticized the governor's budget for spending too wildly, especially with the state's fiscal future still uncertain.

While Cooper would hike spending virtually across the board, his budget includes two major spending programs with eye-popping numbers.

Cooper's budget again includes expanding Medicaid, a top policy priority since taking office. Medicaid expansion would offer government-paid health insurance to some 600,000 working-age adults without children. The federal government and the state would share the costs, which would reach $500 million for North Carolina.

Joe Coletti, senior fellow for fiscal studies at the John Locke Foundation, said Cooper's budget underestimates the cost of Medicaid expansion, while using short-term federal money to increase spending across the board.

"All of this increases the state's fiscal fragility," he said.

Cooper said Medicaid expansion was more pressing this year because many North Carolinians lost their jobs during the pandemic, and thus their employer-sponsored health insurance.

"We must get health care to more working people, and the best way to do that is expand Medicaid," Cooper said.

Another major spending program would be a $4.7 billion bond package for infrastructure projects, the bulk of which would be in K-12 public schools and the state's colleges and universities.

"Interest rates have never been lower, and our state needs the boost," Cooper said.

Voters would need to approve the bond proposal, and bonds would be issued over a period of years. Interest rates have already begun to rise as the federal government has pumped trillions into the economy.

Other proposals in Cooper's budget:


"As common as tomato sandwich day is at the General Assembly, so is a Roy Cooper budget that cuts scholarship funding for families and students," said Mike Long, president of Parents for Educational Freedom in North Carolina. "Instead of giving parents and families that opportunity to find the best educational option for their children, Governor Cooper is doubling down on cutting funding for scholarships that provide families those needed resources."

Mitch Kokai, senior political analyst at the John Locke Foundation, described the budget proposal as a "political document designed to score partisan points" that's not much different from what he's proposed in the past.

"The COVID-19 pandemic gave Governor Cooper an opportunity to step back and reassess the way state government goes about serving the people of North Carolina," he said in a statement. "It's unfortunate that this budget document shows little sign of such a necessary adjustment."

The governor's budget proposal isn't likely to gain much headway in the General Assembly. Republican leadership has prided itself on fiscal responsibility, reducing taxes while setting aside money for future recessions.

Sen. Brent Jackson, R-Sampson, one of the Senate's chief budget writers, said he was concerned with the high levels of spending and borrowing in the governor's proposal.

"We don't want to return to an era of rollercoaster-style budgets with huge spikes in the boom years followed by huge cuts in the lean years," he said in a statement Wednesday.

House leadership distanced themselves from the proposal, as well.

"While there are a number of shared priorities funded in the governor's budget proposal, North Carolina lawmakers will remain vigilant in our responsible financial management of the state and avoid irresponsible decisions that have harmed taxpayers in the past," House Speaker Tim Moore, R-Cleveland, said in a statement Wednesday. "The General Assembly will maintain budget strategies that made our state attractive to so many newcomers with a powerful economy and state government that serves citizens effectively."

Jackson and Moore said they're committed to working with the governor to find compromise and pass a budget. Cooper vetoed the last biennial budget, meaning North Carolina has spent the past two years largely operating on the 2017 spending plan.

"I look forward to reaching consensus on a state budget that works for all North Carolinians to avoid further vetoes by the governor of valuable funds that taxpayers earned and communities deserve," Moore said.