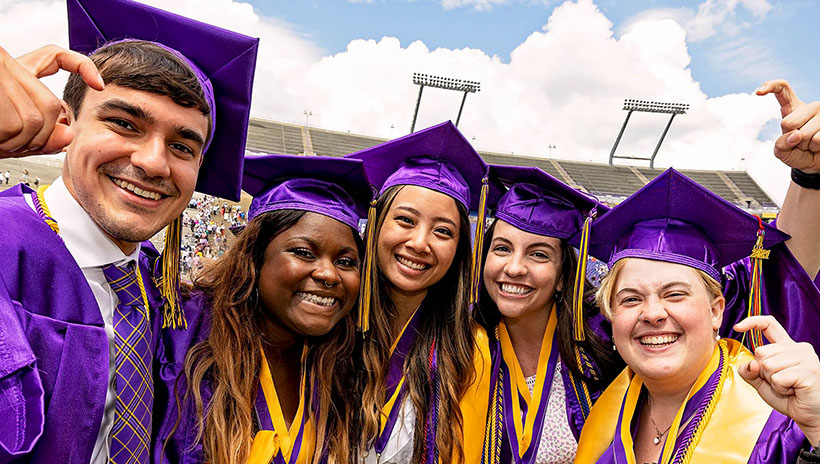 For the first time in too many months, cheers of "PURPLE!" and "GOLD!" rang through Dowdy-Ficklen Stadium Friday as East Carolina University celebrated the accomplishments of more than 4,200 graduates during a series of spring commencement ceremonies.

In his first commencement as chancellor, Dr. Philip Rogers welcomed students from the Class of 2021 as well as the Class of 2020, whose graduates had online ceremonies last May and December due to the coronavirus pandemic. Three in-person commencement ceremonies on Friday allowed for social distancing with fewer people in the stadium for each event.

Between rain showers and despite a delayed start for the midday ceremony, ECU and University of North Carolina System administrators joined graduates, families, friends and faculty members in marking the occasion. Occasional cheers carried over from the baseball field next door, where the Pirates took on Tulane Friday afternoon.

"Commencement is one of the most special days in the life of a university, but this year is extra special because today we all feel a small sense of normalcy again," Rogers said. "You can feel the energy and Pirate spirit back in the air again."

Rogers said the graduates took different paths to an ECU degree, but all will leave as Pirates.

"Each of you graduates at a moment in time when you are desperately needed, when your skills, your talents, your knowledge and your leadership are required in order for this world to thrive," he said. 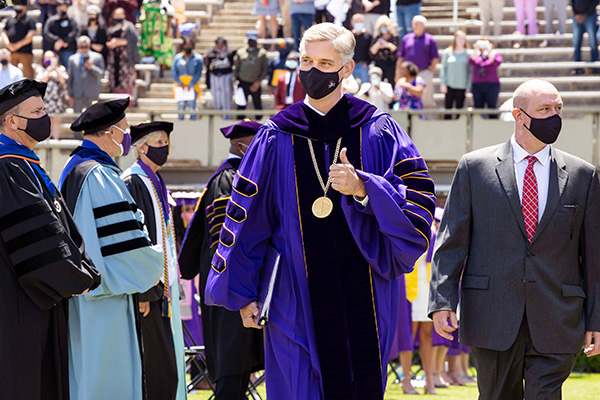 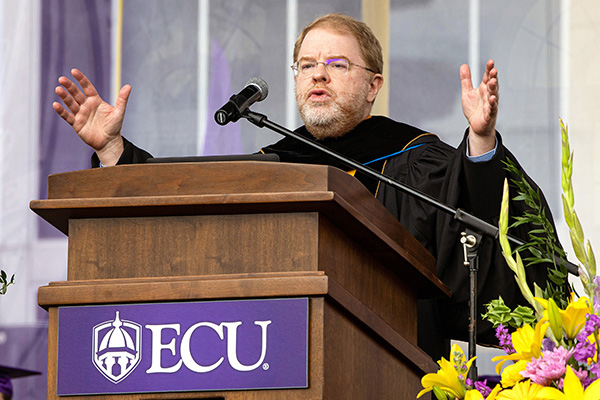 Peter Hans, president of the UNC System, delivered the keynote address for ECU's 112th spring commencement. He told the graduates that whatever their chosen path, they have important work to do.

"Shaping the world takes curiosity and focus — curiosity so you can make real decisions about where your attention belongs, and focus so you can follow through," Hans said. "Attention and time is your greatest resource, and you only get a limited amount of it. Tomorrow is promised to no one. Choose how to spend it, or other people are going to choose for you."

Joining in remarks to graduates were Tucker Robbins, Student Government Association president; Dr. Purificacion Martinez, chair of the faculty; Vern Davenport, chair of the ECU Board of Trustees; and Leo Daughtry of the UNC Board of Governors, who presented the board's 2021 Award for Excellence in Teaching to Dr. Ricky Castles, associate professor of engineering in the College of Engineering and Technology.

Robbins noted the graduates' resilience and opportunities that come with earning a degree.

"As you begin to embark on your next journey, don't forget our motto, servire, meaning to serve. Make it a priority to give back to your alma mater, serve others, share the treasures you've gained from this place, and always represent with honor, class and integrity," Robbins said. "I plead for you to fight for those that can't fight, speak for those that need a voice and exceed the benchmark in all facets of life." 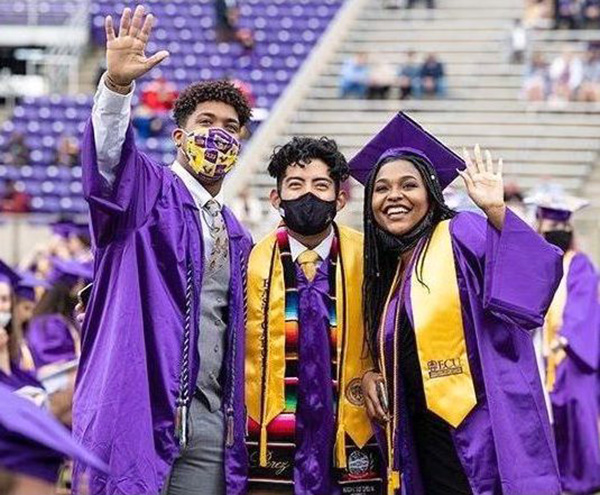 "I've been holding my emotions in for the last two weeks, but the dam is breaking today," she said. "He is our first generation graduating from college, so I'm just ecstatic. I'm so happy, I'm so proud of him and his accomplishments. It's a beautiful moment for our family. Christian is the youngest. His father passed when he was a baby, so it's just such a big moment, such a big, big moment."

Sitting in the stands was another first-generation student, Nirav Mehta of Durham, who graduated in 2020 with a degree in information and computer technology. He started work at Nutanix, a cloud computing company, last summer.

Walking into Dowdy-Ficklen Stadium brought back memories of watching football games from the Boneyard, especially when ECU beat UNC — where his brother goes to school, he said. "It's been kind of nice to have that year away and reflect on it and let it all come back," Mehta said.

His mother and father, who live in Elm City, were by his side. "We're proud parents. We've been waiting a year for this ceremony," said his father, Nainesh Mehta, who is originally from Zambia and immigrated to the United States from the United Kingdom with his wife. "We worked hard when we came to this country, and all of our hard work and sacrifice paid off."

They will celebrate at another ceremony next week when their son, Neil, graduates from UNC with a master's degree in accounting. 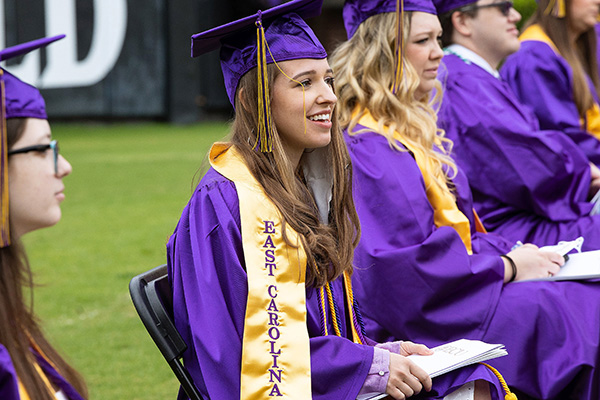 Mary Lindsey Edwards of Goldsboro graduated with a degree in public health with a concentration in community health. | Photo: Rhett Butler 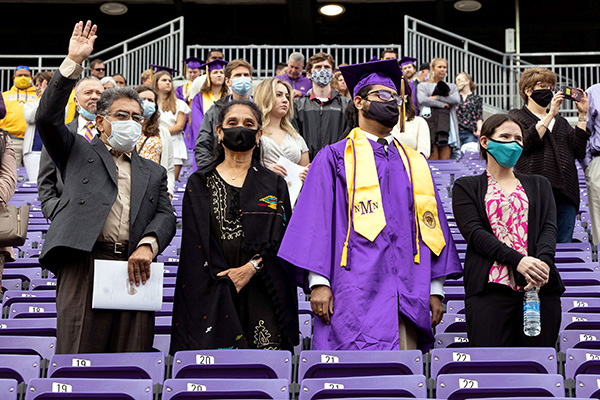 Nainesh Mehta, left, stands along with son, Nirav Mehta, who graduated in 2020 with a degree in information and computer technology. | Photo: Rhett Butler

"It didn't feel real until we were walking in the stadium, that yes, I did this. It feels like a big accomplishment," said Edwards, who completed her first two years at a community college. "I wish I had more time to experience ECU and go to sporting events and be involved, but I'm thankful we're able to be here today." 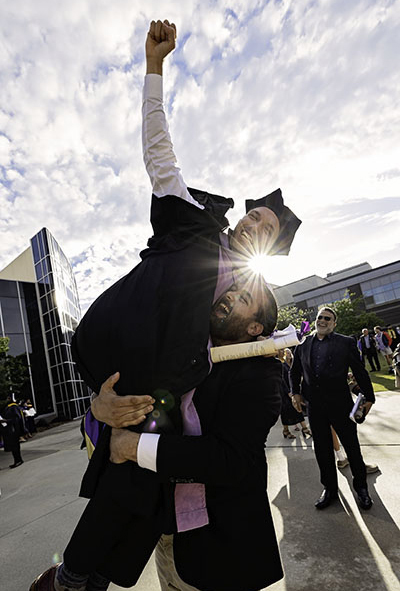 Dental grad Omar Taha is lifted in the air by his brother Amir Taha, a first-year dental student after the 5 p.m. ceremony in Dowdy-Ficklen. | Photo: Cliff Hollis
Hans noted in his remarks that many of the friendships formed during college will endure for life, and College of Business graduate Landon Fowlkes of Kernersville agreed.

"I came in here not knowing a lot of things and [I had] a lot of social anxiety, and then this place really helped me overcome, and I made a lot of friendships, and I'm just so grateful for all of it," he said.

Fowlkes said he met Morgan Creech, one of his first and best friends at ECU, through club sports. Creech said her family was thrilled to be able to attend commencement in person, and her mom even flew in from Michigan. Creech earned a bachelor's degree in business and will start her Master of Business Administration at ECU this fall.

Will Sorrels, who majored in history and minored in psychology, said spontaneous trips and activities with friends will be what he remembers the most.

At the 5 p.m. ceremony for graduate degree students, Dr. Ron Mitchelson, special assistant to the chancellor, delivered the keynote address. He asked the graduates to make three commitments: to live with passion, to live with compassion and to leave their communities better than they found them.

He also asked the graduates to take a moment to soak it all in.

Two-time Pirate Jason Powers said he was thrilled that his sons, ages 4 and 8, could see him receive his MBA in person.

"It's great for the Class of 2021 and the Class of 2020 to be able to be here and do this," he said. "It's such an important thing, and doing it in person marks the occasion that much better."

Powers, who earned his first ECU degree in marketing in 2005, credited his wife, Brandy, for providing the support that made his graduate degree possible. Now that it's done, he's interested in sharing his experience through teaching.

"Commencement is one of the most special days in the life of a university, but this year is extra special because today we all feel a small sense of normalcy again. You can feel the energy and Pirate spirit back in the air again."
– Chancellor Philip Rogers

Two graduating nurses, Hadley Coleman of Pittsboro and Abigail Schulenklopper of Greensboro, will be transitioning to full-time work in the weeks ahead. Coleman completed 126 hours of clinical care as a student at WakeMed Health in Raleigh on the medical intermediate care floor, where she will be returning to work full time caring for patients with a diverse range of needs from recovering from COVID-19 to traffic accidents or gunshot wounds.

Schulenklopper will start work in August at Vidant Medical Center in Greenville, where she will work with patients in the rehabilitation medical unit. "I love it. I'm excited to work there."

Graduating during National Nurses Week was special, and being with classmates was even better. "It was nice to sit with everyone on the field even though we were socially distanced, it still felt like a graduation," Coleman said. 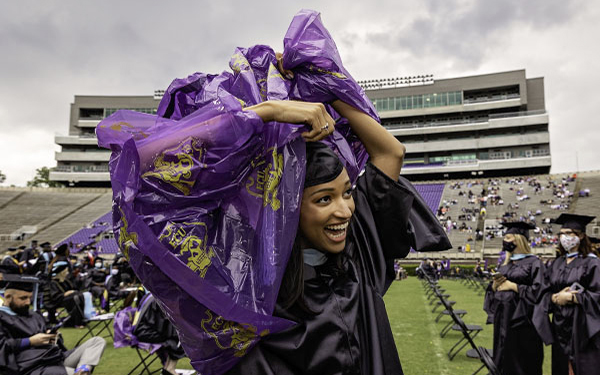 Cassie Canino braces for rain early in the 5 p.m. ceremony. | Photo: Cliff Hollis
For some, the years go by quickly.

"It feels like it's happened really fast, almost surreal, especially in this era of COVID," said Kaitlyn Vinson of Raleigh, who graduated from the Brody School of Medicine. She's headed to Greenville, South Carolina, for a residency in pediatrics. She said being a medical student during the pandemic was hard at first but yielded dividends.

"It motivated us to make a difference as doctors," she said.

Also during the ceremonies, Sheridan Barnes, chair of the ECU Alumni Association board of directors, recognized the Robert W. Wright Alumni Leadership Award winners: Adam Butler of Roseboro, Jamie Chamberlin of Greenville, Victoria Chan of Holly Springs, William Guiler of Charlotte and Dana Shefet of Cary. The award, which recognizes academic achievement as well as commitment to leadership and integrity, is the most prestigious award presented by the alumni association.
Go Back