‘Frozen in amber:’ UNC-dependent Chapel Hill suffers after COVID locks town down | Beaufort County Now | It's a neighborhood landmark, since 1996 the ideal place to watch the incessant flow of people and cars that grudgingly meet at Franklin and Columbia streets. 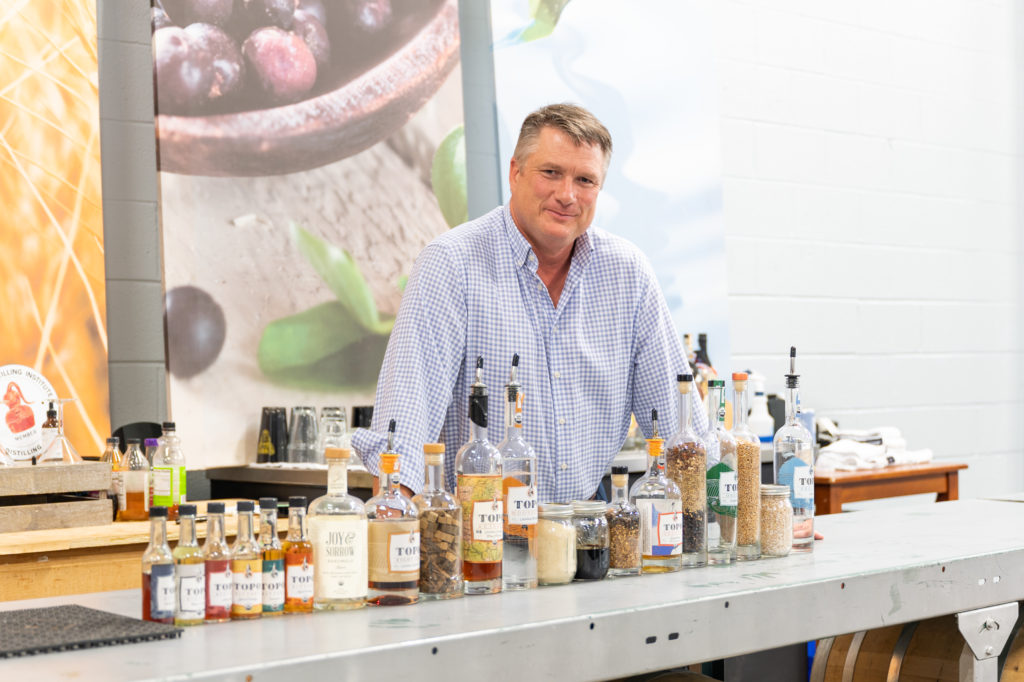 Scott Maitland at his distillery, Top of the Hill, in Chapel Hill. (CJ photo by Maya Reagan)

It's around lunchtime on a Wednesday in mid-July, the bright remnants of the morning quickly morphing into the typical hot, heavy Carolina afternoon. A dozen or so people - diners and drinkers - survey downtown Chapel Hill from atop a third-floor balcony at Top of the Hill Restaurant & Brewery.

It's a neighborhood landmark, since 1996 the ideal place to watch the incessant flow of people and cars that grudgingly meet at Franklin and Columbia streets. The sense of vibrancy that personifies this town, which laid dormant the better part of a year, has returned. Because the University of North Carolina has, even though the academic calendars say it's summertime.

COVID suppressions and shutdowns last year closed Chapel Hill, a town of 60,000 or so people dependent on a university and its wide orbit.

Businesses closed and, even for the iconic TOPO, things got tense.

TOPO survived because of will and determination. Innovation, determination, and Paycheck Protection Program loans.

"Without the university in session, downtown Chapel Hill was frozen in amber," Scott Maitland told Carolina Journal. Maitland is the proprietor of TOPO, as well as a like-named distillery a few blocks up Franklin Street.

When COVID hit, 152 people worked at the restaurant. All but 10, Maitland says, were suspended or furloughed.

"We just scrambled," he says. "Somehow, we were able to scrape by and, to be frank, we would not have survived without the PPP money, and I am grateful for that. Beyond words."

Offering take-out food wasn't an option, in no small part because Top of the Hill is just that, a third-floor space at what's usually - pre- and post-COVID anyway - one of the town's busiest junctions. Maitland and his team consolidated operations at the distillery, selling meal kits, six-packs of beer, and whiskey, rum, vodka, gin ... and hand sanitizer.

"That was actually a lot of fun," he says. "When I look back at COVID, I think that's going to be my fun memory, a team of eight of us just really working hard."

Maitland said the restaurant got some $250,000 from donations as part of a Founders Club 2.0 membership campaign. Which helped Maitland and his crew to keep going, surviving.

"I can't tell you how much I appreciate it, people's support in that regard. But again, to me, the government's restriction on restaurants was never the factor," he said.

A dark, empty UNC campus was. Challenges for the town and its residents, manifesting in unique yet onerous ways.

"The overarching thing ... I think what something like COVID did, was reveal what the basis for our economy in Chapel Hill is. And it's the university, right?"

The COVID shutdowns, he said, exposed a need for the town to diversify, to grow its economy beyond the university's massive shadow.

He's talking about places such as Dorrance Field, a 4,000-seat stadium for soccer and lacrosse. About Karen Shelton Stadium, named for the long-time field hockey coach.

But Chapel Hill, like towns and cities throughout the state and country, has returned, albeit some more slowly than others. Some bruises have yet to heal. Scars, some big, others small, the permanent reminders.

Maitland has no quarrel with the government's COVID moves, and he's grateful for all the support and encouragement, from patrons and donors and the N.C. Restaurant & Lodging Association.

"If there's a silver lining ... hopefully it's that people realize the importance of restaurants, and bars, and coffee shops, because it's culture. It's our culture.

Those winds have shifted, he says.

"I'm actually pleasantly surprised. People are like, 'No, I want to go out. I want to see people,' which is great."

TOPO now employs about 65 people. He shuttered an event space and has closed the restaurant on Tuesdays, staying open Monday because so many other places are closed. Workers are getting overtime, an extra day off. They're happy. Maitland is happy.

"I gotta tell you," he says, "I'm shocked at the amount of business we're doing. Are we setting records? No, but we've got business."
Go Back