Ann Margret will always be my favorite entertainer from Bob Hope's USO tours.

Login to Send a Private Message to Bobby Tony
This post is an expanded narrative of a previous Christmas Spirit music post, which included Silent Night from the Bob Hope USO tours.The video at the bottom is a different video which includes some of Bob's routine. Here is a link to that post. In my entire 71 years of living, I have only missed one Christmas with my family. That was in 1968. Now not a Christmas goes by that I don't remember that one Christmas far away. Thanks to Bob. Ann and a half a million brothers, I was not alone.    Bobby Tony

I took this picture of Bob Hope during the 1968 performance. I had less than 60 days left in country. I had some 8 MM film as well but it was lost along with the negatives I took at this show. 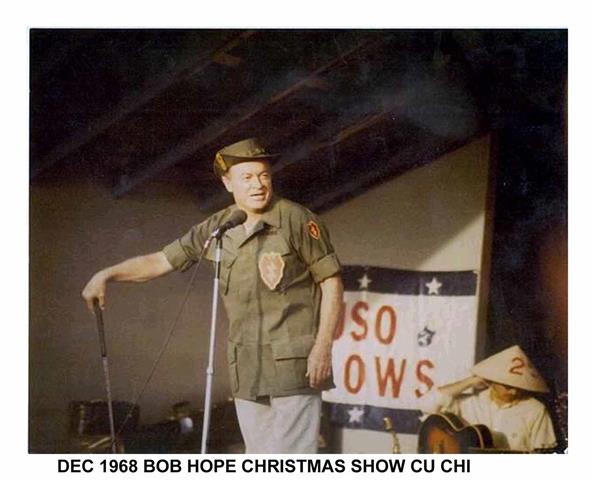 There is a story told about Ann that I believe to be true. While I don't always believe what Snopes confirms or debunks, this could be one case where they are correct. Snopes

Here is the story:

"Richard, (my husband), never really talked a lot about his time in Viet Nam other than he had been shot by a sniper. However, he had a rather grainy, 8 x 10 black & white photo he had taken at a USO show of Ann Margaret with Bob Hope in the background that was one of his treasures. 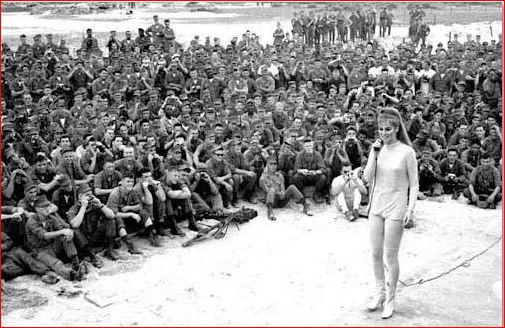 This is most likely not the original picture.

A few years ago, Ann Margaret was doing a book signing at a local bookstore. Richard wanted to see if he could get her to sign the treasured photo so he arrived at the bookstore at 12 o'clock for the 7:30 signing. When I got there after work, the line went all the way around the bookstore, circled the parking lot, and disappeared behind a parking garage.

Before her appearance, bookstore employees announced that she would sign only her book and no memorabilia would be permitted. Richard was disappointed, but wanted to show her the photo and let her know how much those shows meant to lonely GI's so far from home.

Ann Margaret came out looking as beautiful as ever and, as 2nd in line, it was soon Richard's turn. He presented the book for her signature and then took out the photo. When he did, there were many shouts from the employees that she would not sign it. Richard said, "I understand. I just wanted her to see it".

She took one look at the photo, tears welled up in her eyes and she said, "This is one of my gentlemen from VietNam and I most certainly will sign his photo. I know what these men did for their country and I always have time for "my gentlemen". With that, she pulled Richard across the table and planted a big kiss on him.

She then made quite a to do about the bravery of the young men she met over the years, how much she admired them, and how much she appreciated them. There weren't too many dry eyes among those close enough to hear. She then posed for pictures and acted as if he was the only one there.

Later at dinner, Richard was very quiet. When I asked if he'd like to talk about it, my big strong husband broke down in tears. "That's the first time anyone ever thanked me for my time in the Army", he said.

Richard, like many others, came home to people who spit on him and shouted ugly things at him. That night was a turning point for him. He walked a little straighter and, for the first time in years, was proud to have been a Vet.

I'll never forget Ann Margaret for her graciousness and how much that small act of kindness meant to my husband. I now make it a point to say Thank You to every person I come across who served in our Armed Forces.

Freedom does not come cheap and I am grateful for all those who have served their country.

If you'd like to pass on this story, feel free to do so. Perhaps it will help others to become aware of how important it is to acknowledge the contribution our service people make."


Here is a six minute partial clip of the show from December 1968.The entire Bob Hope USO tours DVD is available at Time/Life. Please excuse the choppy editing. The jokes in this clip were much appreciated by the GIs. Please remember that there are still soldiers all over the world who are not able to be with their loved ones this Christmas Season.

I have a standing joke that I have overused every Christmas since 1968. "I wanted to spend Christmas with my loved ones, but I had to spend it with my family instead."

Posted by one of Ann's Gentlemen from Vietnam