N.C. House passes election-reform measures | Beaufort County Now | A number of key election reforms moved through the N.C. House this week. Included on that list is a bill that switches up the deadline for absentee ballots and another measure that bans outside private money from flowing to county boards of elections.

Published: Saturday, November 20th, 2021 @ 9:32 am
By: Carolina Journal   ( More Entries )
Publisher's Note: This post appears here courtesy of the Carolina Journal. The author of this post is David Bass. 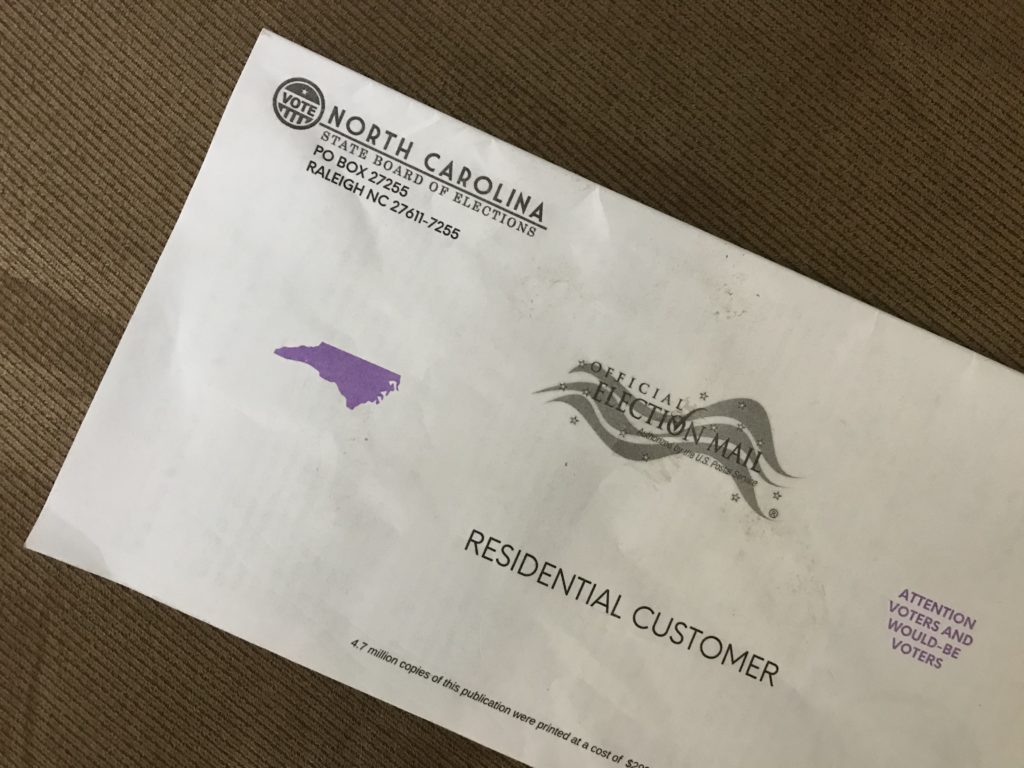 
A number of key election reforms moved through the N.C. House this week. Included on that list is a bill that switches up the deadline for absentee ballots and another measure that bans outside private money from flowing to county boards of elections.

According to sponsors, the bills are designed to shore up voting integrity following the 2020 general election debacle that included numerous accusations of fraud.

"To say that we don't need to try to do everything we can to stop [fraud] is missing the point. It is happening," said Rep. Larry Pittman, R-Cabarrus. "We need to try to curtail it. It's worth it."

Democrats and representatives of left-wing advocacy groups claim the bills are an attempt to stifle the vote.

"In this moment, we are in the midst of a pandemic. We have bus drivers who have to sit out. We have child nutrition assistance workers that aren't being paid enough. And this is your focus: You want to find ways to restrict access to voting ... you continue to try to keep people like me from voting," said Cheryl Carter, co-interim executive director with Democracy N.C, when the bills were being considered by the House Rules Committee on Wednesday.

"These are the kind of restrictions designed to stop just short of driving the voters out into the streets in protest, but robust enough to harvest votes off the margins where elections tend to be won and lost," said Rep. Deb Butler, D-New Hanover.

The first measure, Senate Bill 326, would revise the deadline for absentee ballots to be received by local boards of elections from three days after the election to the close of polls on Election Day itself. This change would return N.C. law to where it stood in 2009 and match 32 other states with the same deadline of Election Day.

"In 2020, a lack of transparency about the number of outstanding absentee ballots caused North Carolina's call of the election to drag on unnecessarily for days in races that were close, particularly in the presidential and U.S. Senate races," said Sen. Warren Daniel, R-Caldwell. "Leaving voters in the dark about the outcome harms the integrity of the process."

Another measure, Senate Bill 725, would bar county boards of elections from accepting private donations to administer election services. This move would outlaw scenarios like the one that unfolded in 2020 involving donated funds from the Center for Tech and Civic Life, funded by Facebook founder Marc Zuckerberg and his wife.

The CTCL donated so-called "Zuck bucks" to county boards of elections in 33 N.C. counties that ultimately ended up skewing Democratic in voting, compared to the 67 counties that received no money.

"Common sense will tell you that when partisan groups are sending private dollars to counties that otherwise exclusively run elections, it erodes the confidence in the outcome," said Sen. Paul Newton, R-Cabarrus. "Let's nip in the bud. No more private money. We have plenty of money in this state to run our own elections."

Dr. Andy Jackson, director of the Civitas Center for Public Integrity at the John Locke Foundation, spoke in favor of the bill prior to it passing the House Rules Committee on Wednesday, Nov. 17

"If you look back at the 2020 U.S. Senate race in North Carolina, if you counted all the votes statewide, Thom Tillis won," Jackson said. "He is the sitting senator now. However, if you counted all the votes just for the counties that were provided funding by [CTCL], Cal Cunningham would be our U.S. Senator today. On the other side, we have evidence that the Schwarzenegger Foundation had disproportionately funded counties that tended to go Republican. This is an arms race we do not want to get into."

Democrats spoke out against the bill.

"This to me seems like a sledgehammer to a gnat," said Rep. Amos Quick, D-Guilford. "We are forgetting the fact that the 2020 election was impacted by this little thing called a pandemic. We had to have protective equipment and protective equipment was purchased by some of our counties to make sure that voters were safe as they went to cast ballots. Ninety-seven of our 100 counties used this money to buy things like pins and protective equipment. Some was used to increase the pay for poll workers."

A third measure, House Bill 259, requires that all voting machines purchased in the future be manufactured in the U.S. It also stipulates that software used on voting machines be U.S.-made. A second provision in the bill cross-references voter records with jury service to ensure that non-citizens do not vote in an election.

The bill passed by a 61-47 margin and goes back to the Senate for a concurrence vote.

"The visually impaired have a constitutional right to vote, and this bill ensures that voting is accessible," said Newton.

The bill passed the House Rules Committee unanimously on Wednesday and was placed on the House calendar for today, but then pulled off so no final vote was taken.
Go Back