Melodies I Like to Play: "What a Wonderful World" | Beaufort County Now | There are so many outstanding songs written over the last seventy years since the advent of hi-fidelity stereophonic equipment's development, which stands to reason, music played well and properly presented sticks perfectly to our better spirits.

Melodies I Like to Play: "What a Wonderful World" 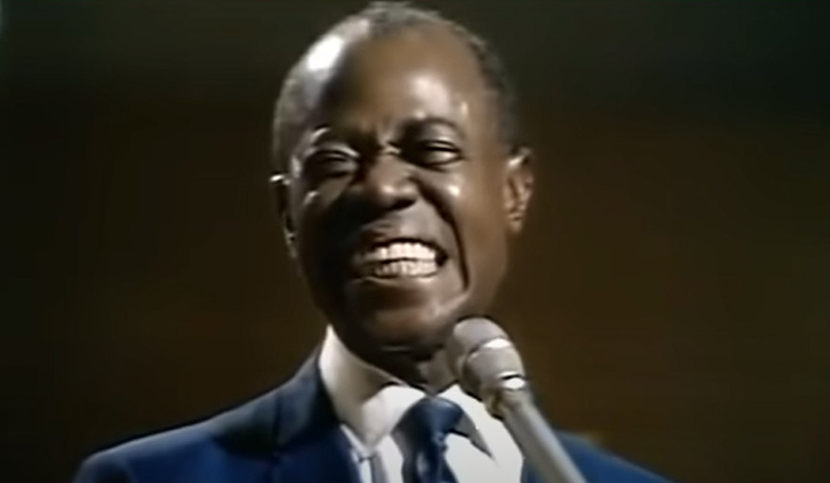 This is the first installlment of a new series regarding music I care about enough to begin the struggle to wander down a poor path toward the playing of that subject song; a list of which can be found here.

There are so many outstanding songs written over the last seventy-five or so years since the advent of hi-fidelity stereophonic equipment's development, which stands to reason, music played well and properly presented sticks perfectly to our better spirits, creates the need for more of what is better. Understandably as a child of that period of musical growth, I fleetingingly wished that I could have learned to play the guitar well enough to enjoy that process of knowledge gained; sadly, it was not to be, no matter how wonderful the music of my time was engineered to sound and ulimately presented to my waiting ears.

Fast forward to the beginning of my 61st year, when I made one last ditch effort to learn to play my pawn shop bought Classical guitar; you know the one with the nylon constructed G B E strings with the E A D strings of a soft metal. However, at this exceedingly well timed moment in my existence, finally something slowly clicked in my not so tired mind, and I knew that me making a purposeful sound on this pawn-shop-classic guitar was nigh at hand. As fate would have it, when I found a few hours, I began to teach myself how to play, purposefully concentrating on my left hand's dexterous machinations, so I could primarily learn a few chords - toughen my fingertips with callouses - just in the hope that I could hammer out some discernable facsimile of a variety of rudimentary ballads: "House of the Rising Sun" (most every pre-novice's beginning point), Credence Clearwater Revival songs like "Have You Ever Seen the Rain" and "Who'll Stop the Rain", which did /does require me singing, and that as well would prove, yes to be, another struggle all together.

As the last 5 years have transpired, blessed to be a rather busy fellow working at least two important jobs, I struggle to make time to sit down with my "pawn-shop-classic;" however, that "clicking" desire in my often revved up mind continues. To rectify that when-time-permits yearning, I take advantage of quiet moments when sleep does not come readily, and quietly learn a few new chords, pick a few new notes out of the mix, and make the "pawn-shop-classic" give up something that sounds like music ... albeit Stan's ultra novice style of music.

In retrospect, as someone who spent bunches of time enjoying the listening to music of the sixties and seventies, and then lost that enjoyment almost altogether as a working father of four children, while remaining a good son to my own father, I now had a bunch of catching up to do. Regardless, I have developed a running list of favored musicians, favorite songs, and that list is oddly expanding as my sense of discernment expands, which I learn is not mutually exclusive. On occasion, I will fleetingly happen to think of a song long forgetten, or just hear an inspiring melody in my car, forgotten, or never known; I will eventually Search the internet for the varied chord arrangements developed by others of that composition, pick the grouping that I favor, and then work it into some semblance of a proper rendition.

We all have to discover some interesting diversion to remind us that enjoyment remains in life, even if a bit late to become real professional musician. I am more than happy just to learn how it works, and then understand what incredible effort is required to become those that make the most memorable music of my time, a time when some of the greatest music in human hisotry was created.

The perfect song, "What a Wonderful World" for the perfect vocalist, Mr. Louis Armstrong: Above.

One such memorable classic of timeless greatness is "What a Wonderful World", written and released in 1967 by Bob Thiele and George David Weiss, which was written specifically to be recorded and sung by the indominable Louis Armstrong. Composer Weiss was inspired by Louis "Satchmo" Armstrong's ability to bring people of different races together.

The song was not promoted in America, and did poorly. It was promoted in the United Kingdom, shooting up to number 1 on the pop charts, making the incredible Mr. Armstrong the oldest male singer to achieve that distinction. In my humble opinion "What a Wonderful World" is one of the best American songs, as it is composed, arranged and performed in total perfection here below. Considering the song was stupidly underpromoted by the recording label, ABC Records (no longer an entity), that tacitly misused Mr. Armstrong's incredible talent, it is fortunate for the World that this epic melody is roundly enjoyed today.

It is one of my favorite songs of all time (top 10 class of distinction), and when I got myself to the point I could play a version of the song, I just had to do it, and yes, I do try to sing it, but Louis Armstrong I could never imitate. Satchmo (that would be Mr. Satchmo to me) is an outstanding trumpet player, creative arranger of jazz, and successful band leader, but my dear loving God ... What a voice.


Louis "Satchmo" Armstrong plies his estimable skill optimizing the human optimism within our better angels in this lovely uplifting melody, "What a Wonderful World," here: Below.

The chart of lyrics and chords (not too many, and all fairly easy to finger) is the grist for my success in performing any song written by others on my "pawn-shop-classic". I truly love this song which will fully incentivize me to do it justice when my spirit finds its proper rhythm.

What a Wonderful World

composed by Bob Thiele and George David Weiss in 1967; performed by Louis Armstrong 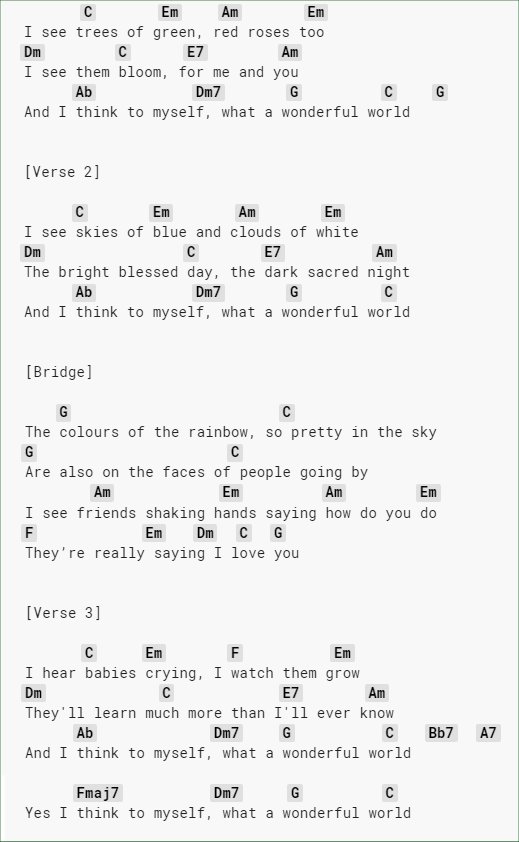