Often cited by Milton Friedman, this 'law' became known as the "theory of bureaucratic displacement." In short, Gammon stated that in "a bureaucratic system ... increase in expenditure will be matched by fall in production ... Such systems will act rather like 'black holes,' in the economic universe, simultaneously sucking in resources, and shrinking in terms of 'emitted' production."

Or as Friedman summed it up, "in a bureaucratic system, useless work drives out useful work."

"Whenever government bureaucracy takes over at the expense of consumer choice," Friedman explained, we can expect to see Gammon's Law at work. As such, we can expect expenditures in the system to rise dramatically, fueled largely by unproductive administration, without any tangible increase or improvement in output or outcomes.

As America continues to struggle with runaway price inflation, Gammon's Law can help inform us about some of the industries that have been seeing prices rise faster than overall inflation for decades.

The chart below, created by University of Michigan and American Enterprise Institute economist Mark Perry, indicates such industries tend to be closely tied to government bureaucracy. Not coincidentally, these industries tend to have dramatic spikes in administrative positions. 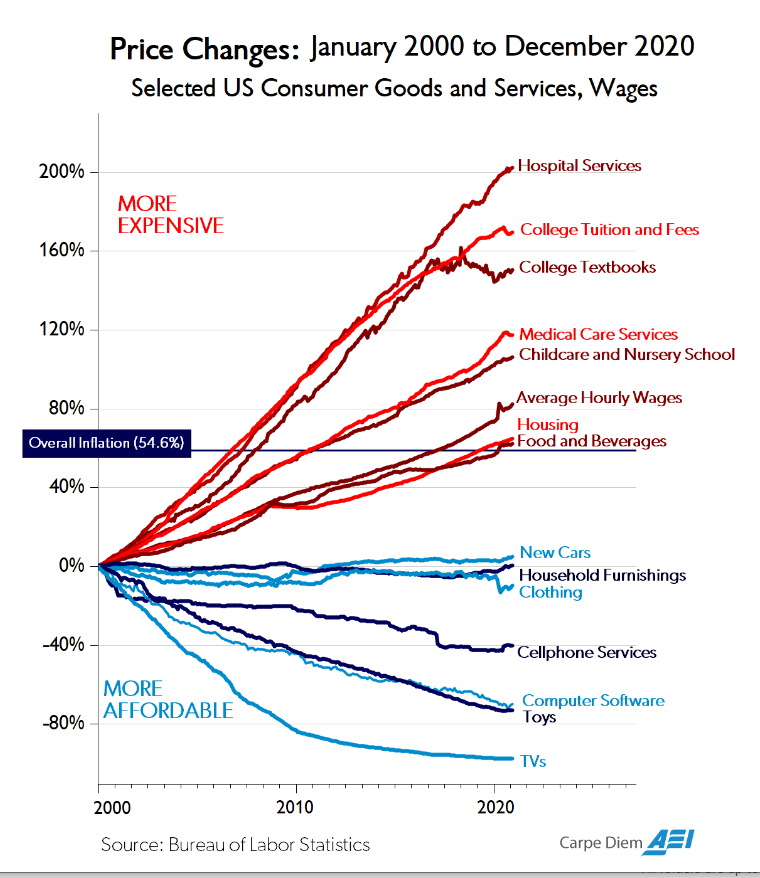 Two of the top categories in terms of price increases - hospital and medical care services - are in the healthcare industry.

With government programs paying for 40% of all medical care expenses, and the so-called private insurance industry heavily regulated by government so as to restrict competition, the healthcare industry is a poster child for Gammon's Law. 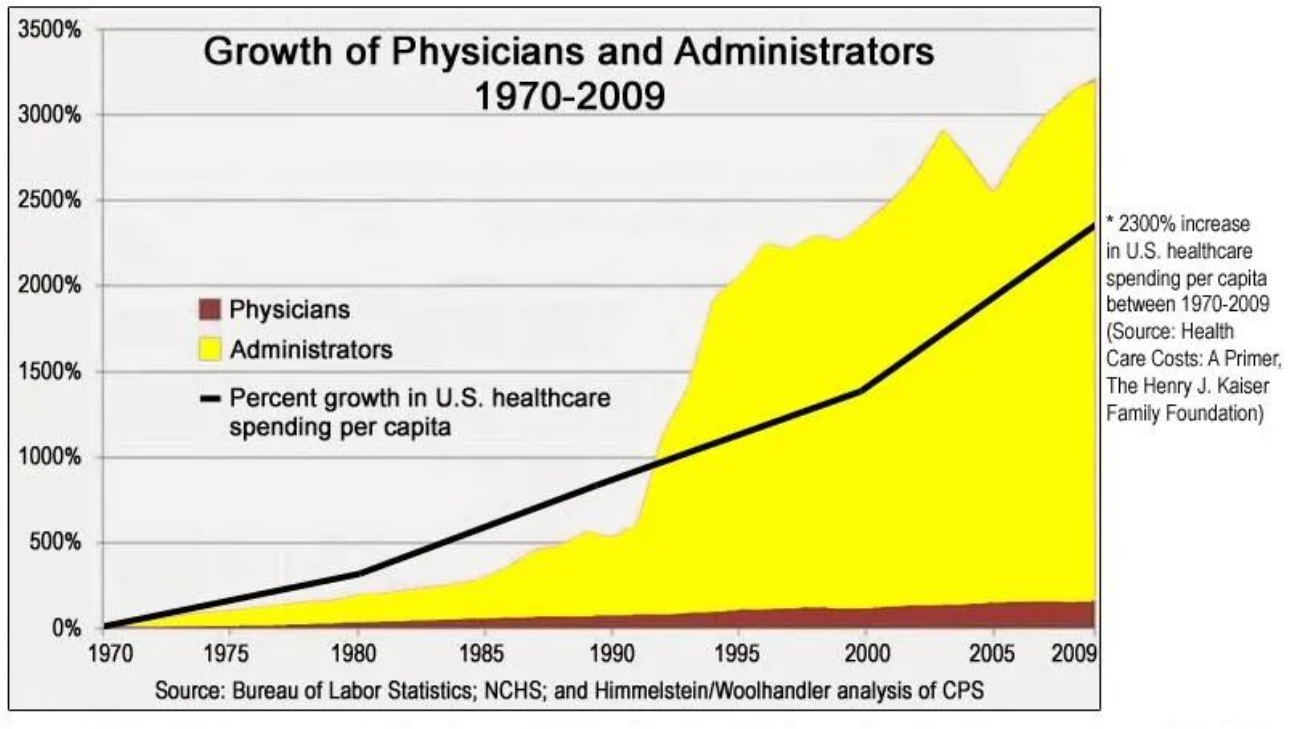 College tuition and fees, along with college textbooks, are also among the fastest rising costs. With a substantial share of their revenue coming from state and federal government programs and direct appropriations, public universities are closely aligned with government bureaucracy more so than market forces.

Once again, this has led to substantial administrative bloat. 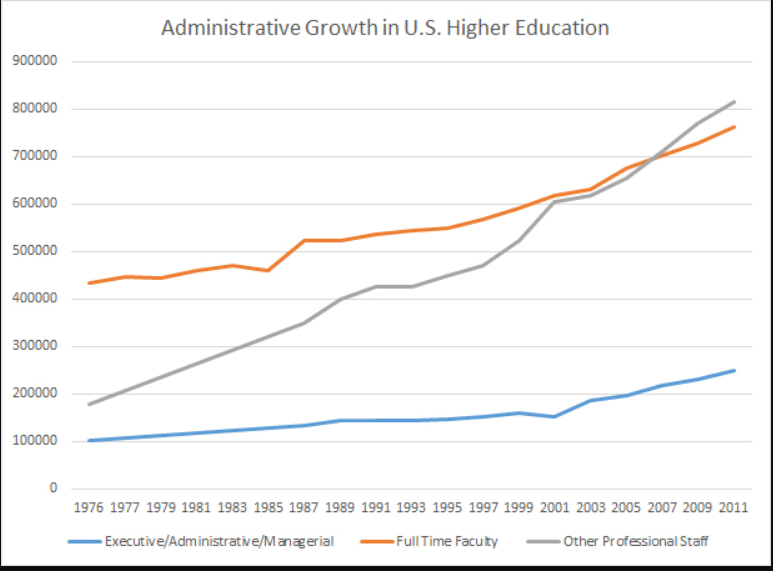 The chart above, produced by economic historian Phillip Magness of the American Institute for Economic Research, shows that "other professional staff" (i.e. support staff and misc. administrators) more than quadrupled from 1976 to 2011, compared to far smaller increases in full-time faculty and executive managers.

That trend has continued in more recent years. For instance, this 2021 report from the American Council of Trustees and Alumni found that from 2010 to 2018, non-instructional spending-including student services (29%) and administration (19%)- grew faster than instructional spending (17%).

The study further reported that "One analysis found that from 1993 to the beginning of the Recession in 2007, the number of full-time administrators per 100 students at America's leading universities increased by 39%, while the number of employees engaged in teaching, research, or public service increased by only 18%."

Not listed on Mark Perry's chart, but worthy of inclusion, is the rising cost of public education. In the 20 years from 1999 to 2019, per student public education spending virtually doubled, rising by 99%, nearly twice the pace of inflation.

Being fully funded by government, public education is another textbook case for Gammon's "theory of bureaucratic displacement."

As such, the following chart should come as no surprise:

From 2000 to 2019, the growth of administrative staff outpaced the increase in students - and teachers - by a whopping 11 to 1 ratio. Administrators also grew at well over twice the pace of principals and assistant principals.

Gammon's Law provides an important insight to better explain exploding costs in industries closely aligned to government. Where government subsidies and control crowds out market forces and consumer choice, the inevitable bureaucratization will give rise to administrative bloat, and exploding costs.

As Friedman concluded, Gammon's Law "is a direct consequence of the pursuit by all of us of our self-interest. In a market, we can pursue our self-interest only by persuading people to buy what we have to sell, hence we are driven to serve our customers' interests."

In contrast, Friedman continued, "In a government bureaucracy that is exempt from competition, the customers have nowhere else to go. Their interests are largely irrelevant. Hence, the bureaucrat can serve his self-interest at their expense by expanding his empire and reducing his workload."
Go Back