Pope Benedict XVI Retirement - Not Quite A Surprise

Published: Sunday, February 24th, 2013 @ 8:17 pm
By: Alicia Colon   ( More Entries )
Publisher's note: Alicia Colon knows that we must fix the Social Scurity program before it is too late in this post, which was originally published in The Irish Examiner. 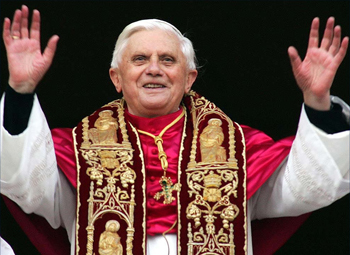 The next Pope will have to be vigorous and healthy because the church is at war. It has always been at war against the forces of evil and totalitarianism and has been instrumental in the failures of socialism. But John Paul II had Ronald Reagan in his corner and this Pope has instead a man who is determined to neutralize the Catholic Church - Barack Obama. - Alicia Colon
Catholic I would never presume to report on any developments in another religion but Pope Benedict XVI's shocking retirement announcement prompted many articles and much commentary from writers who know nothing about my faith. They ranged from a listing of potential candidates to surmises of whether the new pontiff would finally liberalize the Roman Catholic Church and bring it into the 21st Century. The articles were speculations of a possible Black, Hispanic, Asian or even an American Pope; about the only thing I can certainly predict about the new Pontiff is that he will be a surprise.

I was a teenager when Pope Pius XII died and remember the fascination I had with the prospect of a new, possibly more amiable leader than the previous dour Pope. Look and Life magazines covered the story with color photos of the College of Cardinals highlighting the frontrunners and yet when Àngelo Giuseppe Roncalli was finally chosen, I was as shocked as the rest of the world. Nothing about this man who chose the name John XXIII indicated that this rotund cardinal would radically change the church as we knew it.

He initiated Vatican II and brought the word ecumenism into our daily language. Latin would no longer be the language of the mass; the priest would be facing the congregation; and we would be shaking hands with strangers in church giving the sign of peace. Many Catholics did not feel comfortable with the changes especially the older generation who was used to disappearing from everyday life during mass. Many critics accused the Vatican of modernizing and surrendering tradition but the truth was it was just the opposite.

The nuns at Cathedral High school explained that the Church was actually returning to its roots. The Mass would now be closer to the ritual performed in the catacombs than in huge cathedrals and the words of the service would be in the vernacular not a dead language.

Pope John XXIII was enormously popular with a personality directly opposite from his predecessor but when he died he was followed by the intellectual Giovanni Battista Enrico Antonio Marìa Montini (Paul VI) who reminded all of Pius XII. This was another surprise and yet he was the first Pope to visit the United States.

The next Pope Albino Luciani (John Paul I) was a mystery and his 33 days in office was probably the shortest on record. His death has been rumored to be suspicious and generated copious conspiracy theories. He was also the first Pope with two first names chosen to pay homage to the two Popes before him.

I was shopping in the local deli when I heard the radio announcement that we now had a Polish Pope. To say that this was a surprise would be inadequate. It was a shock. Karol Józef Wojtyla, now known as John Paul II was a seminarian in Nazi Germany and knew first hand the horrors of communism. Although some dispute his responsibility for the fall of communism in Russia along with Ronald Reagan and Margaret Thatcher, I believe history will reflect that it is indeed the case.

Pope John Paul II was a rock star and whenever he came to the United States, he was followed by hundreds of thousands of young people from all over who listened to the man they knew loved and respected them. My son was in Denver when his helicopter flew over the stadium and the cheers of "John Paul II, We love you" were deafening. Why was he so popular with the young? Because the Pope knew they were the hope of the future and if the world was to be saved, they would be his warriors.

No one expected the oldest man Joseph Alois Ratzinger (Pope Benedict XVI) to follow him and now no one expected him to be the first to resign since 1294. Yet it was the right thing for him to do. He had no choice.

The next Pope will have to be vigorous and healthy because the church is at war. It has always been at war against the forces of evil and totalitarianism and has been instrumental in the failures of socialism. But John Paul II had Ronald Reagan in his corner and this Pope has instead a man who is determined to neutralize the Catholic Church - Barack Obama.

All one has to do is look at his record to realize that Obama is steering America in a straight course to Socialism. President Obama has surrounded himself, for appearance-sake, with nominal Catholics [those who have betrayed their Faith] like Joe Biden as his vice president, and Kathleen Sebelius [HHS Secretary]. The Democrat Party is overloaded with these faux Catholics in high powered positions like Nancy Pelosi and John Kerry. Obama has appointed pro-abortion Ambassadors to predominantly Catholic countries and the Vatican. Obama called on phony Catholic organizations like "Catholics United for the Common Good" and "Catholics United" [financed by George Soros] to push the enactment of ObamaCare. The Saul Alinsky method is to splinter, divide, and so isolate the Catholic Church as to render it ineffective. It's working.

In the last election, the Catholic Bishops were united in fighting the Obamacare mandate that was designed to force religious institutions to allow procedures forbidden by the faith. The Church began lawsuits to fight the mandate and while it looks like Obama caved on the issue, the mandate still applies to individuals who refuse to assist in these procedures. Once upon a time, the Catholic vote was a formidable bloc but no more and I blame the politically correct clergy for this. I've written before that perhaps it is time for the church to wield the excommunication weapon on the legislators who retain their Catholic label while defying their faith. The Kennedys, Cuomos, Kerrys et al need to be turned away from the Communion rails by their pastors because giving them the Eucharist they essentially spit on is a sacrilege.

Reading the numerous articles about the Pope's resignation, I am bemused by the ignorance of some of the authors who can't quite grasp the idea that the Pope is not chosen by men but by the Holy Spirit who inspires their selection. Any candidate who auditions for the job will never get it and in fact, nearly all of the modern Popes were reluctant to accept it. Just as John Paul II came from a country that would be crucial in defeating the Soviet Union, the next Pope will be chosen to battle socialism in this nation and around the world.

The spiritual power of the papacy was ironically depicted in one of Boccacio's bawdy 'Tales of The Decameron' written during the Church's most decadent time. One tale tells a story in which a Jew goes to Rome to see what the Christian faith, at its heart, looks and acts like. The Jew sees nothing but depravity, scandal, usury, and debauchery. When he returns home he tells his doubting friend that he has converted to Christianity because only the truth could survive such depravity and remain unchanged.

There have been immoral Popes who had the power to change the church but they did not because they could not. The Holy Spirit is in charge and it will be fascinating to see whom He picks in the next few weeks.

Publisher's note: Alicia Colon resides in New York City and can be reached at aliciav.colon@gmail.com and at www.aliciacolon.com. Alicia would dearly love to hear from you.
Go Back