Turnage Theater | Beaufort County Now | The Turnage Theater was one of two movie theaters in downtown Washington when I was a child. The other was the Meritta on the south side of West Main Street. | historical, downtown, turnage, theater, movie, washington, nc, beaufort, county, places

Login to Send a Private Message to Stan Deatherage
When I was a young boy growing up in Washington, North Carolina, the streets were often paved, but many were dusty dirt and rock lanes, and some were burnt red paver bricked side streets off the main streets, running northwest to southeast, parallel with the Pamlico River. I remember as each of the dusty lanes, and sadly, the brick pavers of the side streets were slowly covered over by pavement - urban renewal they called it. 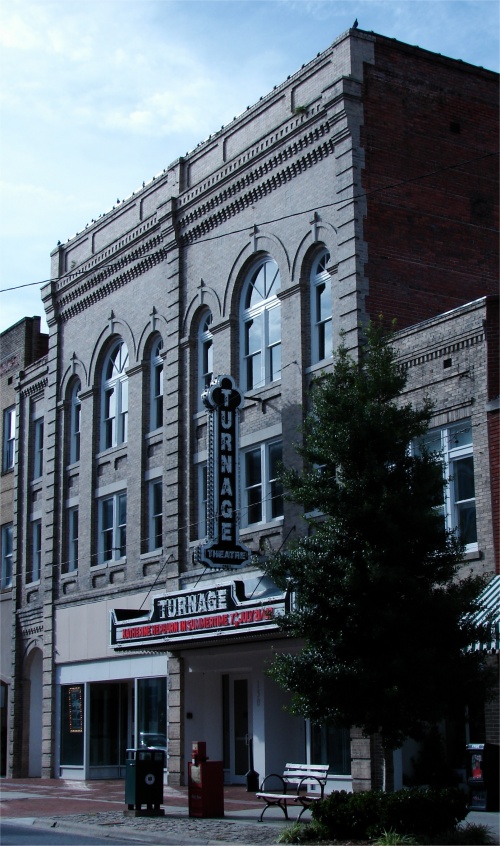 at the Turnage Theater, one violent with Colts and Peacemakers blazing, one with singing cowboys Gene Autry or Roy Rogers, or Hopalong Cassidy, who never sang, but like Gene and Roy never actually shot anybody with their six shooters, but were all mysteriously well adept at always shooting the guns out of the bandits’ hands.

The Turnage Theater was one of two movie theaters in downtown Washington when I was a child. The other was the Meritta on the south side of West Main Street. I can’t remember where it once stood and I’m not even sure if I spelled the name right. What I am positive of is I would frequent the Turnage Theater 20 times for every one visit to the Meritta.

The Turnage was the nicer of the two theaters, even though it had fallen into some disrepair, but that wasn’t my primary impetus. It was the features that drove me up to the box office to first pay a quarter, and later 35 cents (rampant inflation in the early 1960‘s), and then through those hallowed doors to melt into my seat, and be lost into a world of desert fighters, big gruesome monsters and fighting our nation’s battles on land, in the air and on the sea.

It was the Turnage Theater where I accompanied my father, Robert Earle, to see the redistribution of the 1939 classic, “Gone With the Wind,” and on other occasions, we enjoyed the John Ford / John Wayne classic Westerns: “Fort Apache,” “She Wore a Yellow Ribbon” and “The Searchers.”

I remember turning seven years old whence my mother began to allow me to accompany my 16 month older brother, Robert, to the Turnage for the movies, and at eight years of age, I coaxed her into letting me attend the theater to see “Lawrence of Arabia” by myself ... Well, with a friend - but he was younger. Those were different times. People looked out for each other. I looked to the Turnage for an education: first for the cinematic thrills, and later for the nuances of the interaction people - the machinations of humanity.

Regardless of the theater’s mounting physical degradation, the Turnage Theater was my second home. Many fond memories remain with me from those days. Fortunately, for me and the citizens of Beaufort County, and others from our region, partaking in its current expositions of the musical and theatric arts, the renovated Turnage Theater is continuing to build memories today.

The Public / Private partnership to renovate the ornate small town theater is an ongoing process that is completed in the phase where the original movie theater, with mezzanine and entry foyer, is renovated well beyond my memory of it, as is the lobby, which is converted mercantile space, that was a shoe store - sold Buster Brown shoes. Remaining to renovate is the vaudeville theater, with a really big stage, above the lobby and entry foyer. It has been probably 20 years since I visited the second floor, when the Turnage property was on the real estate market, but it is there. If I remember correctly, the vaudeville theater occupies most of the space on the second and third floors on the south side (main street) of the building. It is comforting to know that it will be preserved, in approximately, its present condition providing the roof and the windows remain intact. 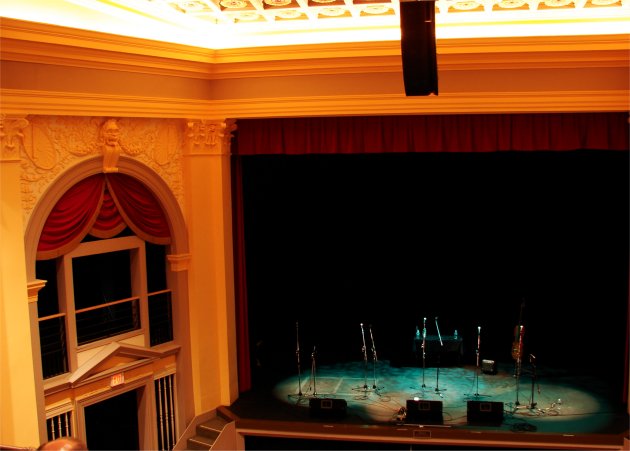 The renovated Turnage Theater before another fine show: Above.     photos by Stan Deatherage

Today, with a renovated theater with a large original stage to provide a platform for the arts, we local folks have the opportunity to purchase reasonably prices tickets to enjoy some really fine acts. Before I began the reporting of these events for the NOW’s, I considered my time to very valuable, and it still is; however, my job requires me to do what I would normally very much enjoy; so I witness, I report and we all benefit. There is one caveat: I will write only about what I know, so some future shows will be off limits to my limited intellect.

Recently, I have attended three shows; the most recent was the eclectic cover band, Trainwreck. These gentlemen play regularly around Greenville, North Carolina and are held in high regard by the locals as a funked-up party band, and this time, the Greenville locals get it right. 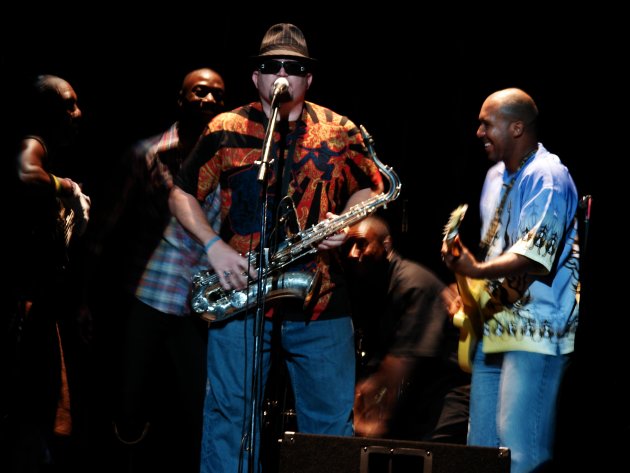 Trainwreck giving it up in the funk of a real party band.    photos by Stan Deatherage 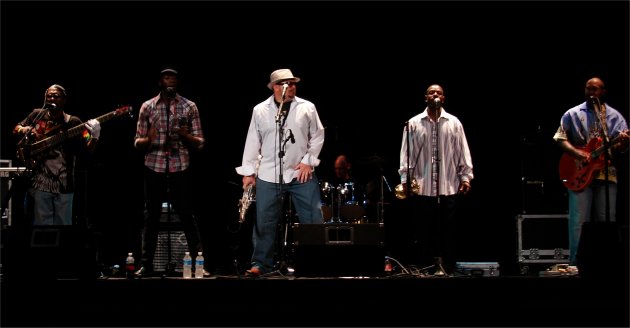 Trainwreck: getting the funk started.     photos by Stan Deatherage

With a sparse crowd available for this group of very talented musicians, it was dancing in the isles, or from the comfortable anonymity of one’s chair. If you just sat there and didn’t really get it, I would check myself into the hospital, if I were you, to confirm that I still had a heart, and I’d get my butt, if I were you, into a church to check if I still had a soul. These guys were that good. And if you don’t like music from the early 1960’s, like “Stand by Me,” or a funked-up, much improved version of Steve Miller’s “Fly Like an Eagle,” well, the good people of The Turnage are offering the Four Freshmen on September 9, 2009 - something for everybody.

Trainwreck, the musical genre, the personality of the band and Steve Acosta, the white guy (I discriminate because 2/3 of the band is Black) on sax, is English, and remarkably they reminded me of The Commitments, the all white Irish Soul / Rhythm and Blues Band, from the great 1991 film, “The Commitments.” Seeing them playing their brand of music brought to my melodic mind the images of The Commitments, and their manager Jimmy explaining to perspective member, as he was putting together the band, why they would be playing soul music:

If you enjoy music similar to that was Band Manager Jimmy Rabbitte‘s passion, Soul, and even more Irish in context, you would have enjoyed the Mike Cross concert at The Turnage on June 19, 2009. Mike Cross, first and foremost, is a storyteller, with the unrepentant soul of an Irish drunkard. 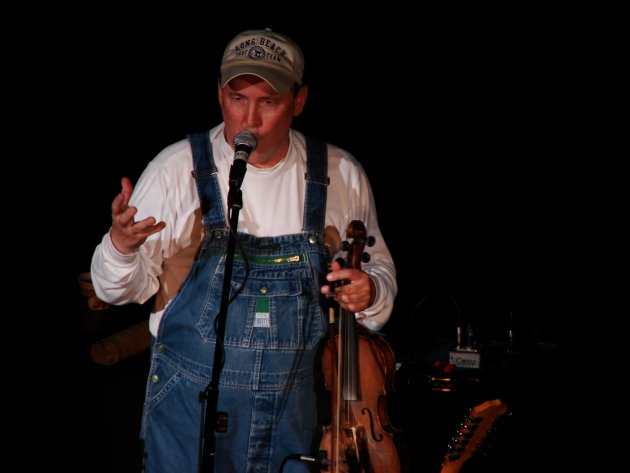 Mike Cross talking it through, with the crowd hanging on every word.     photo by Stan Deatherage

I reference the traditional Folk Irish melody, “Whiskey ‘Fore Breakfast.” Mike wrote the perfect words to this traditional ditty, and while the tune celebrates life, moreover, it celebrates drink’n: “Lord preserve us and protect us. We‘ve been drinking whiskey fore breakfast.” 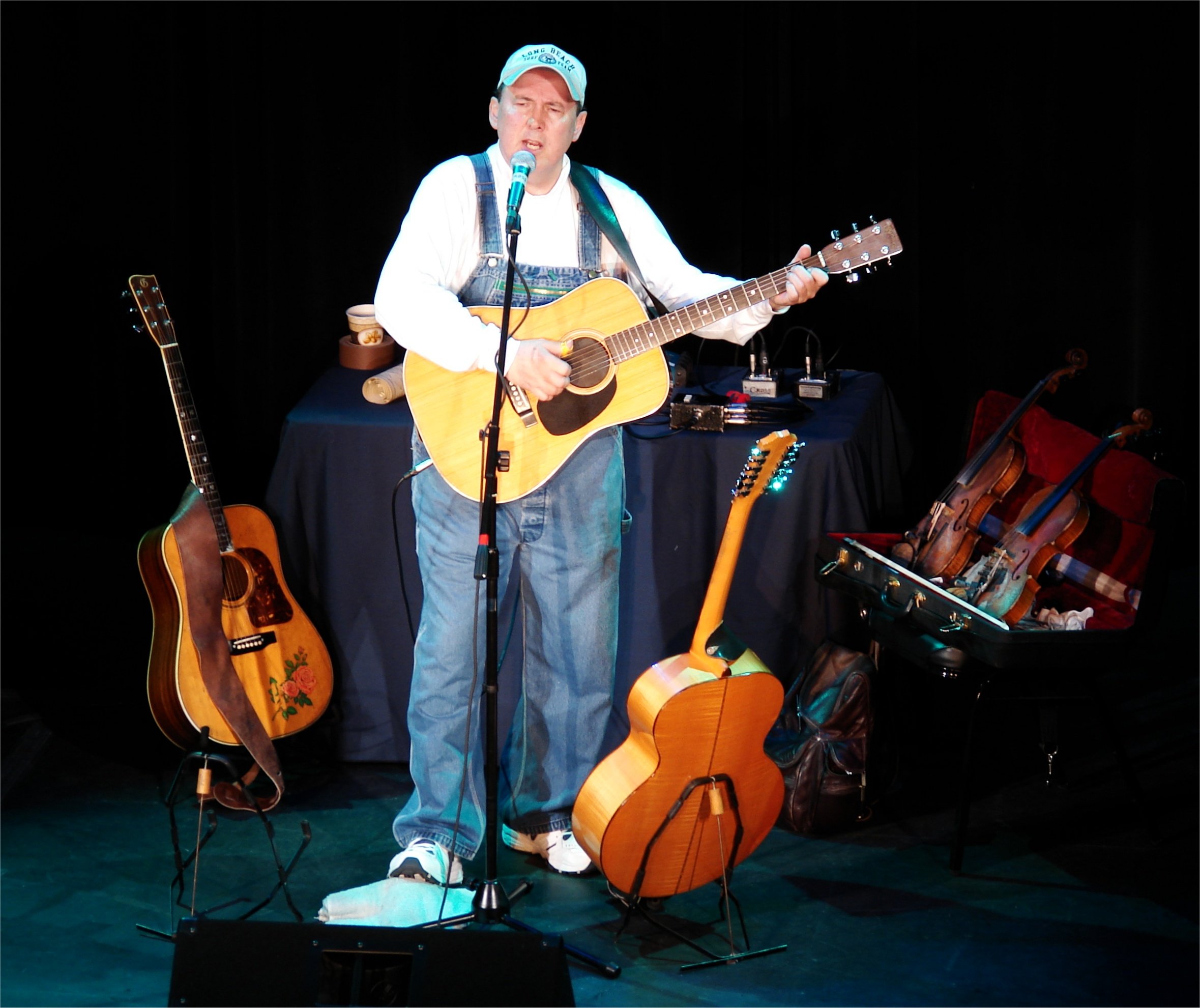 The one-man-band and traditional bluegrass inpressario starts with the 6 string, then finishes with the 12 string, and either fiddle: Above.     photos by Stan Deatherage

Similarly, Mike wrote the words to another traditional song, “The Scotsman,” that affords similar jocularity concerning a Scotsman that had fallen into a drunken stupor, and while he was passed out, two young lassies lifted his kilt to see if it was true that a Scotsman wore no undergarments. Upon discovering the truth in that custom, they tied a blue bow around his manhood; to which the Scotsman exclaimed, as he awoke to heed nature’s call, “Friend I don’t know where you been, but I see you won first prize.”