The Burning Plain | Beaufort County Now | This film is like the harrowing journey of a long drawn down country song, of 111 minutes, that is a sad commentary on how desperate life can become for some of us, and how we might all avoid this. | Charlize Theron, Kim Basinger, southwestern United States, “The Burning Plain,”

The film, "The Burning Plain," predominately speaks to this issue in Director Guillermo Ariagga's morality play as it reveals how deep the loss can be, once a family, led by the respective 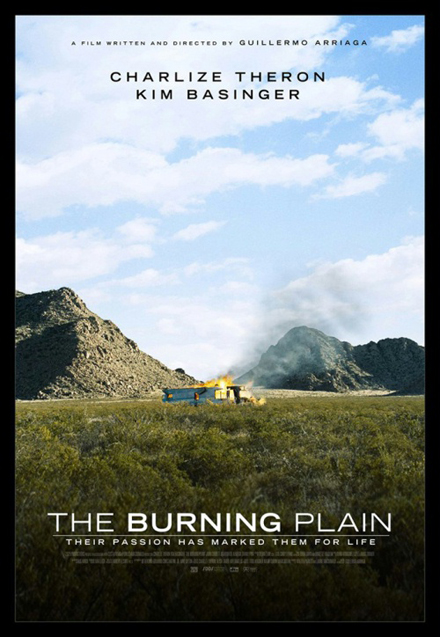 maternal and paternal figure heads, slide precariously down that slippery slope. That slope afforded plenty of space, with the downward force of gravity upon its slick surface, to all family members and other ancillary interactive humans of interest, and make no doubt about this one fact, the bottom of that slope was a catch basin; within it a plethora of disconsolate souls. From this entangled, terrible place, some survived and others did not, but the one riveting fact is that they were all profoundly affected.

This morality play of two families, unbeknownst to each other and living somewhere in the arid southwest, has them intertwined, as is the grim reality, when one maternal head has an adulterous relationship with the paternal head of the second family. The mother, played by breast cancer survivor Gina, played by Kim Basinger, and the Hispanic father of the other family, Nick, played by Joaquim de Almeida, have a deep relationship that goes beyond the sex, but the sex is still a constant reminder of their respective infidelities. Those infidelities profoundly effect both families, but it is the daughter of Gina, Mariana, portrayed by Jennifer Lawrence that is most affected.

Through the theatric conveyance of flashbacks and flashforwards, we are given a glimpse into the profound sorrow of Mariana's soul. It is as if the sins of her mother has sapped her spirit and rendered her dull and unresponsive to any 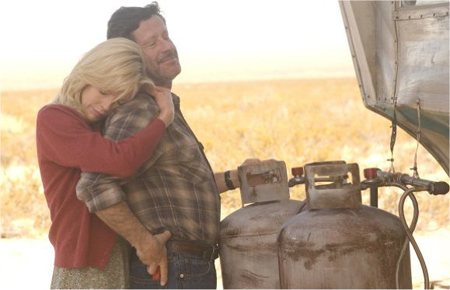 sense of happiness, pleasure. But is it all the fault of her adulterous and deceased mother, or is she also responsible for her damaged spirit that has left her so lifeless - devoid of all sensitivity to other persons? That is the story proposed by Screenwriter Guillermo Ariagga, and it his duty to finish that tale to resolve this sorrowful conflict.

"The Burning Plain" is no fast paced film. It takes long pauses to allow the actors the opportunity to project deep into the sad souls of their characters, desperately seeking some measure of relative happiness before they pass from this earth. This film is like the harrowing journey of a long drawn down country song, of 111 minutes, that is a sad commentary on how desperate life can become for some of us, and how we might all avoid those harrowing paths into Hell on Earth. Besides Kim Basinger's heartfelt performance as the adulterous mother, Charlize Theron as Sylvia (the adult Mariana, who felt compelled to change her name) is effortlessly outstanding as

she fires blanks at living a life.

This film is no happy matter. There is some resolution, but no narrative promises are made, and everyone involved: the cast, their characters and a dumbstruck audience must agree on one thing - those of us still drawing breath must go on living. Damn sad country song, but a pretty fine tale.

Come join us at our new Movie Database. We welcome you to our latest feature to sort through film data to discover information on actors, directors, film images, or just what is playing, when it will pay, or when it did play. It is a work in progress, so we would appreciate your input.