In the Christmas Spirit: Fairytale of New York 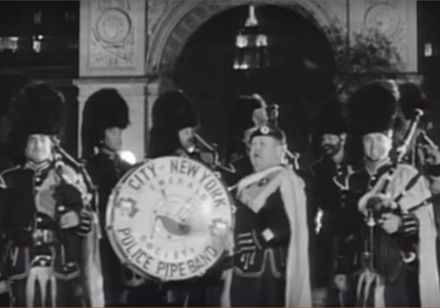 "The boys of the NYPD choir were singing 'Galway Bay'"
One of the more interesting Christmas songs in modern times is The Pouges's Fairytale of New York released in in 1987. It is hard to believe that this song is over 29 (2016) years old. It was a solid hit when first released in Ireland and the United Kingdom, and, still, the song has great longevity, especially here in the season of Christmas.

"Fairytale of New York" is an Irish Folk ditty, set a continent away in what is the ex-patriot capital of Ireland - New York City. A haunting melody, "Fairytale of New York" is paradoxically humorous, while alternatively depressing, as shiftless alcoholism is to blame for much of the malady of a season that is not always as rewarding for some as it is for others. This seasonal song is about the other side of the tracks, where every day is a struggle sober or not. Remarkably, "Fairytale of New York" is a Christmas melody, and a fine one at that, regardless of its a somber message of social communion with drink, alternating with the associative degradation of the spirit.

"Fairytale of New York" is, at its core, an Irish ballad, and is predominately a dialogue between two Irish ex-patriots lost in the shadow of the Big Apple, with Kirsty MacColl singing the female lead and Shane MacGowan, who co-wrote the song, singing the male lead. The "Fairytale of New York" video below is dark, vintage, and well represents New York in black and white nearly 30 years ago.


If you are a guitar, and, or vocalist novice, such as myself, and, you like this unique melody to the extent that you may wish to play, and, or sing the tune, I offer this version of Fairytale of New York, which was easier for me to get a good running start on the mastery of it. I perused many other versions, but the song needs that C chord badly, especially if you want to sing it, and stay within some range of staying in key. Plus the EM seems to work better than the BM or the A chord in the chorus.


Also, when available, we are happy to offer a second version of outstanding melodies in video, so we offer this second rendition by fellow Irishman Christy Moore: Below.