Memorial Day - In Flanders Fields | Beaufort County Now | In 1920, the American Legion adopted the red poppy as the symbol of remembrance of those who gave their lives in war.

Login to Send a Private Message to Diane Rufino
In 1920, the American Legion adopted the red poppy as the symbol of remembrance of those who gave their lives in war. Yet many don't know why the flower was chosen. 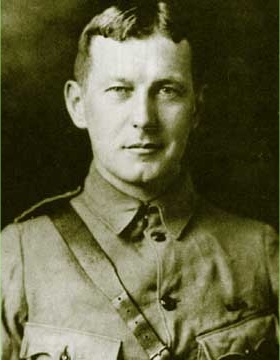 major John McCrae
In 1915, Allied and German forces met for the second time near the Belgian city of Ypres, in the northern region (known as the "Flanders" region). This bloody battle would inspire one of the most memorable war poems "In Flanders Fields." Major John McCrea, a surgeon attached to the 1st Canadian Field Artillery Brigade, tended to the wounded for 17 long days. He was overwhelmed by the carnage, the suffering, the screams, the blood, and the broken bodies. There would be 6000 Canadian casualties alone in just the first 48 hours. One death particularly affected McCrae. A young friend and one of his former students, Lieutenant Alexis Helmer of Ottawa, had been killed by a shell burst on May 2nd. Helmer was buried later that day in the little cemetery outside McCrae's dressing station and McCrae himself performed the funeral ceremony in the absence of the chaplain. The next day, overcome by anguish, he sat outside his dressing station and looked out over the cemetery. He could see wild red poppies springing up where there were once ditches that were filled with the battle's dead.


And so he wrote:


In Flanders Fields the poppies blow
Between the crosses row on row,
That mark our place; and in the sky
The larks, still bravely singing, fly
Scarce heard amid the guns below.

We are the Dead. Short days ago
We lived, felt dawn, saw sunset glow,
Loved and were loved, and now we lie
In Flanders fields.

Take up our quarrel with the foe:
To you from failing hands we throw
The torch; be yours to hold it high.
If ye break faith with us who die
We shall not sleep, though poppies grow
In Flanders fields. 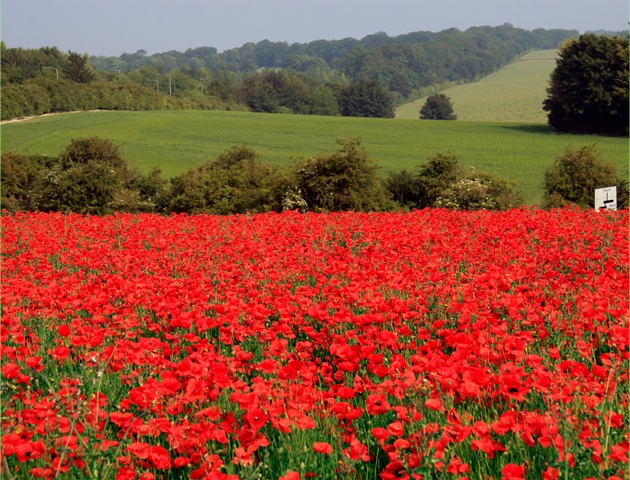 A Belgian poppy field near at or near Flanders.


In 1918, just before the Armistice of World War I was signed, Moina Michael, a US humanitarian, was working at the YMCA Overseas War Secretaries' Conference and came across John McCrae's poem. She was deeply inspired by the imagery of the poppies. She responded with a poem of her own "We Shall Keep the Faith" and promised to wear a red poppy in remembrance of those who had fallen.


We Shall Keep the Faith

Oh! you who sleep in Flanders Fields,
Sleep sweet - rise anew!
We caught the torch you threw
And holding high, we keep the Faith
With All who died.

We cherish, too, the poppy red
That grows on fields where valor led;
It seems to signal to the skies
That blood of heroes never dies,
But lends a lustre to the red
Of the flower that blooms above the dead
In Flanders Fields.

And now the Torch and Poppy Red
We wear in honor of our dead.
Fear not that ye have died for naught;
We'll teach the lesson that ye wrought
In Flanders Fields


It was Ms. Michael who began the tradition of wearing red poppies in remembrance and honor of those who had given their lives for their country.

And so, in 1920, the American Legion adopted the red poppy as its official symbol for fallen servicemen, to be handed out and worn on Memorial Day.

Publisher's note: Diane Rufino has her own blog, For Love of God and Country. Come and visit her. She'd love your company.
Go Back