Published: Monday, February 8th, 2021 @ 9:44 am
By: Pete Benton   ( More Entries )
Publisher's note: Pete Benton is a Veteran's Activist, who served in the Navy during the Vietnam War, was the Captain of the Honor Guard at the White House and at Arlington, and finished his career as a Lt. Colonel. Whenever Pete speaks, our readers would well be served to know a substantive view of this special time in America's better history. This speech, here below, was delivered to the wakeful ears of the Pasquotank County GOP. 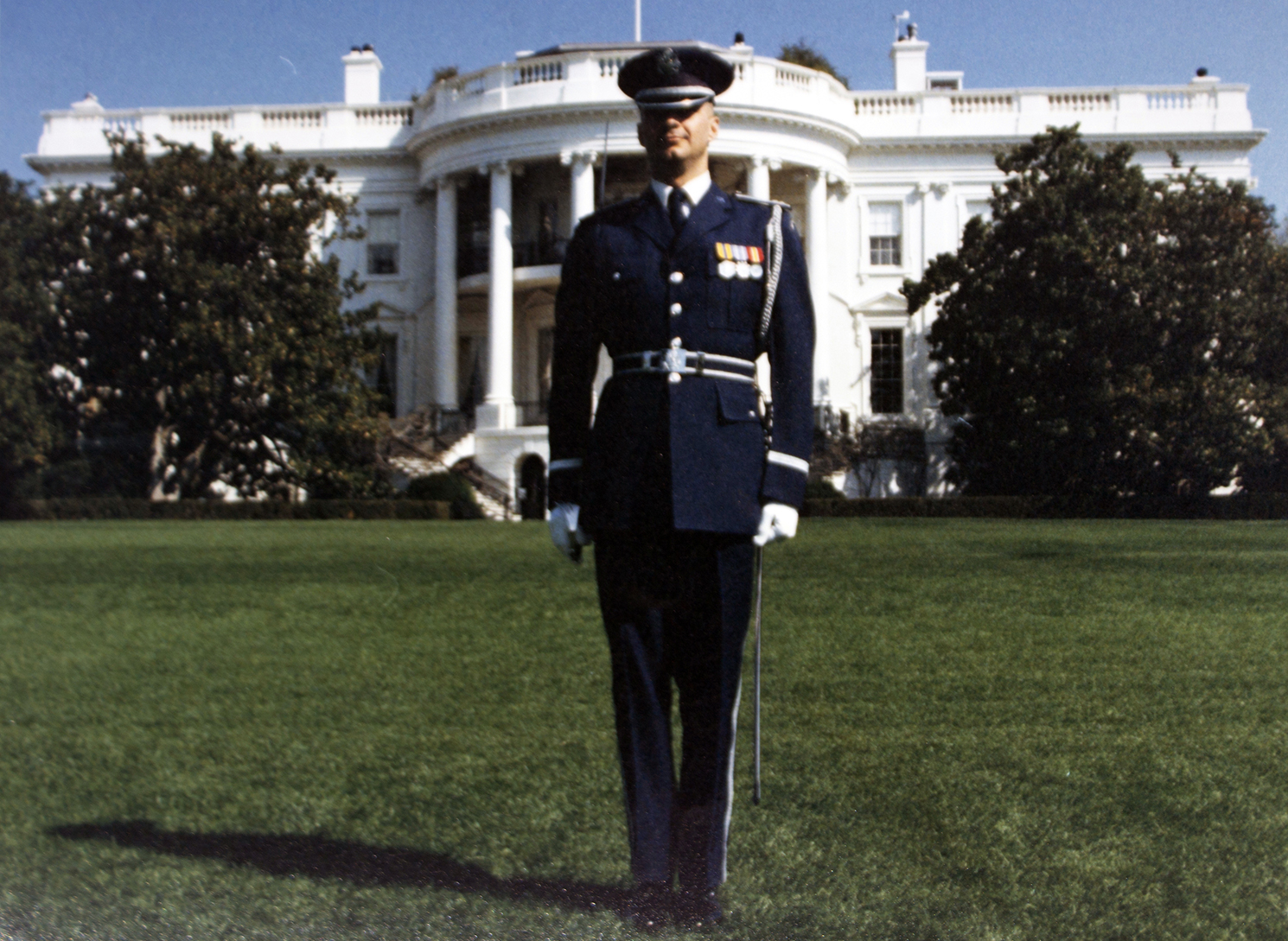 Captain of the White House Honor Guard during the President Bush, 43, administration: Above.     Click image to enlarge.


My dear friends, thank you for allowing me the opportunity to share with you today some personal insights into one of America's greatest Presidents. I had the extraordinary privilege to serve as the Officer In Charge, Ceremonial Flight, United States Air Force Presidential Honor Guard for Presidents Ronald Reagan and George W. Bush. However, I would like to talk specifically about President Ronald Reagan and share some personal information about his background, entertainment and political careers and the extraordinary influence he had on the world as we know it.

Ronald Wilson Reagan was born on February 6th, 1911 in Tampico, Illinois and graduated from Eureka College in 1932. He served as the 40th President of the United States from 1981 to 1989. Prior to his presidency, he was a Hollywood actor and union leader before serving as the 33rd Governor of California from 1967 to 1975. During his childhood years in Illinois, his mother, Nelle would read the Bible to him and his brother, Neil every night which would have a profound future impact upon his life. Ronald Reagan was truly a Man of God, an American Patriot and a true statesman who loved America with the greatest of passion. Ronald Reagan wrote that his mother "always expected to find the best in people and often did". She attended the Disciples of Christ Church regularly and was very active and influential within it. Her strong commitment to the church is what induced her son Ronald to become a Protestant Christian. He once said, "She strongly influenced his own beliefs and she planted that faith deeply in me".

After graduation from Eureka College in 1932, he moved to WHO radio in Des Moines as an announcer for the Chicago Cubs baseball games. While traveling with the Cubs in California in 1937, Reagan took a screen test that led to a seven year contract with Warner Brothers studios. He appeared in 19 films with various big name actors and actresses, however; his most notable movie was Knute Rockne, All American where played the role of George Gipp.

Ronald Reagan did serve in the US Army Officer's Reserve Corps of the Calvary from 1937 till 1945, serving in various capacities such as a liaison officer, AAF Public Relations and the First Motion Picture Unit. By the end of the war, his units had produced some 400 training films for the AAF.

In the late 1950s, Ronald Reagan landed fewer film roles and decided to join General Electric Theater, a series of weekly dramas that became very popular, the show ran for 10 seasons from 1953 to 1962. Then, in 1964, he became the host for the television series, Death Valley Days.

He began his political career as a Hollywood Democrat and looked upon Franklin D. Roosevelt as a "true hero". By the 1950s, his political philosophy moved to the right wing and he became a Republican in 1962.

While serving as Governor of California from 1967 to 1975, he emphasized two main themes: ""to send the welfare bums back to work and to clean up the mess at Berkeley", in reference to burgeoning anti-war and anti-establishment student protests. In his firm gubernatorial term, he raised taxes and balanced the budget. He also advocated the Republican ideal of less government regulation of the economy. In 1976, Reagan challenged incumbent President Gerald Ford in a bid to become the Republican Party's candidate for president. He soon established himself as the conservative candidate with the support of like-minded organizations.

In 1980, the presidential election featured Ronald Reagan against incumbent President Jimmy Carter and was conducted amid a multitude of domestic concerns as well as the Iranian hostage crisis. Reagan's campaign stressed some of his fundamental principles: lower taxes to stimulate the economy and less government interference in people's lives, state's rights and a strong national defense.

As President from 1981 to 1989, he pursued policies that reflected his personal belief in individual freedom, brought changes domestically, both the US economy and expanded the military and contributed immeasurably to the end of the Cold War. In his first term, he became the first president to propose a constitutional amendment on school prayer, he survived an assassination attempt, fired the striking air traffic controllers, and implemented Reaganomics based on supply side economics, advocating a laissez-faire philosophy and free market fiscal policy. He ordered a massive buildup of the United States Armed Forces which would ultimately lead to the downfall of the USSR on the world's stage.

During his second term, he began the War on Drugs Campaign in 1982, a policy led the federal government to reduce the illegal drug trade. Additionally, he ordered the bombing of Libya in response to Muammar Gaddafi's acts of terrorism against Americans and our allies. Certainly, one of his greatest achievements was the accelerated buildup of the US Military which led to the demise of the Soviet empire. Reagan was deeply committed to the abolition of nuclear weapons and to building a defense against nuclear weapons, called the Strategic Defense Initiative. In his 1983 speech, he labeled the Soviet system as the "Evil Empire" and a failure and he explained his strategy was an arms buildup that would leave the Soviet far behind, with no choice but to negotiate arms reduction. Finally, he praised democracy and promised that such a system would triumph over Soviet communism.

I would like to share some excerpts from Ronald Reagan's, The Speech, the 1964 address to the Republican National Convention. "It's time we asked ourselves if we still know the freedoms intended for us by the Founding Fathers. James Madison said, we base all our experiments on the capacity of mankind for self-government. This idea that government was beholden to the people that it had no other source of power except the sovereign people, is still the newest, most unique idea in all the long history of man's relation to man. For almost two centuries we have proved man's capacity for self-government, but today we are told we must choose between a left and right or, as others suggest, third alternative, a kind of safe middle ground. I suggest to you there in no left or right, only an up or down. Up to the maximum of individual freedom consistent with law and order, or down to the ant heap of totalitarianism; and regardless of their humanitarian purpose those who would sacrifice freedom for security have, whether they know it or not, chosen this downward path. Plutarch warned, "The real destroyer of the liberties of the people is he who spreads among them bounties, donations and benefits."

"There are no easy answers, but there are simple answers. We must have the courage to do what we know is morally right...You and I have a rendezvous with destiny...We will preserve for our children this, the last best hope of man on earth, or we will sentence them to take the last step into a thousand years of darkness. For this my fellow Americans is the challenge that we face today".

His final national address came in 1992 when he said, "My fondest hope for each one of you - and especially for the young people here - is that you will love your country, not for her power or wealth, but for her selflessness and her idealism. May each of you have the heart to conceive, the understanding to direct, and the hand to execute works that will make the world a little better for your having been here. May all of you as Americans never forget your heroic origins, never fail to seek divine guidance, never lose your natural God-given optimism. And finally, my fellow Americans, may every dawn be a great new beginning for America and every evening bring us closer to that shining city upon a hill. American's best days are yet to come. Our proudest moments are yet to be. Our most glorious achievements are just ahead". May God Bless the USA."
Go Back