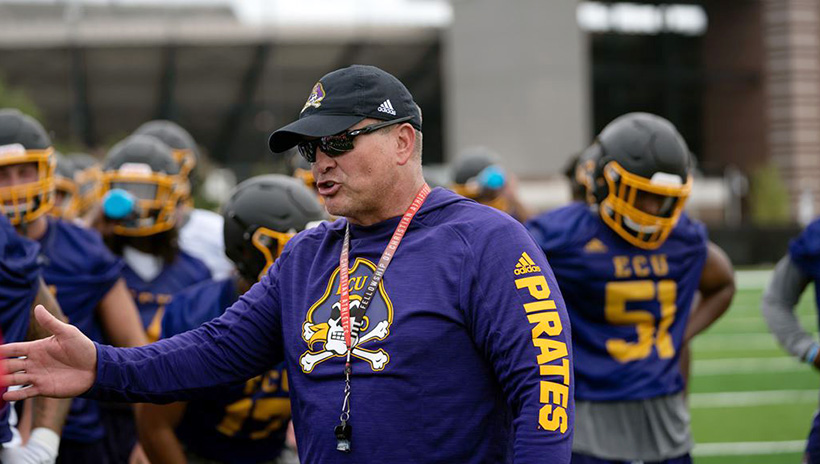 After inclement weather postponed the first two scheduled sessions Tuesday and Thursday, the Pirates experienced spring action for the first time since April 13, 2019 — a span of 706 days.

Houston led his squad through a fundamentals-oriented two-hour practice in shorts and helmets, the first of 15 scheduled outings which will culminate with the playing of the Purple-Gold Spring Game on April 17 at Dowdy-Ficklen Stadium.

"It was great to be back on the field, that was the best thing today," Houston said. "It's been almost exactly a year since we had to shut things down, so we have a much greater appreciation to be out there together. We're obviously a little rusty, but there were so many positives today. The greatest takeaways are incredible attitudes, great effort and not having to push anyone. If anything, we had to dial it back a little, and that's really refreshing."

The Pirates return 10 starters each on offense and defense, and welcome back a total of 63 lettermen off a team which recorded an overall mark of 3-6 during the pandemic-shortened 2020 season. Because of the NCAA's COVID waiver that granted an added year of eligibility, ECU lost only six lettermen who opted to depart following graduation that included starters from a season ago in Blake Proehl (WR) and Chris Willis (DE). Additionally, two members of the Pirates' special teams squad — record-setting kicker Jake Verity and snapper Robert Hill — must be replaced.

Topping the list of 2021 offensive returnees include senior center Fernando Frye (22 career starts), junior quarterback Holton Ahlers, sophomore receiver Tyler Snead and freshman running back Rahjai Harris. Ahlers, Snead and Harris led the Pirates in passing, receiving and rushing, respectively, a year ago. Ahlers, who has opened a team-high 25 contests, has passed for 7,093 yards and 51 touchdowns during his career, while Snead has 134 receptions for 1,519 yards and 14 TDs. Harris earned American Athletic Conference Rookie-of-the-Year honors in 2020 after rushing for 624 yards and four scores.

East Carolina's defense brings back its top eight tacklers from 2020, including junior inside linebacker Xavier Smith who booked a unit-best 72 stops last fall after recording a team-high 81 in 2019. The Pirates also return players who netted 17 of 18 takeaways a year ago — a total which stood among the Top 25 nationally — and featured notable FBS producers in freshman defensive tackle Elijah Morris (3rd in recovered fumbles), sophomore cornerback Ja'Quan McMillian (6th in interceptions) and sophomore safety Jireh Wilson (16th in forced fumbles).

In all, ECU welcomed back players who own a combined 332 career starts — 173 on defense and 159 on offense.

The Pirates will spend their first two mandated acclimation practice sessions in just helmets before progressing to pads (and contact) next Tuesday.

NOTES: Because of the COVID waiver, the Pirates opened spring drills with the rarity of having two four-year lettermen (ILBs Bruce Bivens & Aaron Ramseur) and two six-year players (Ramseur, OL Sean Bailey) on their roster ... SAF Gerard Stringer, who started all 12 games in 2019 and stood third on the team with 63 tackles, returned to action after missing the entire '20 campaign because of an injury ... Friday marked the first-ever East Carolina on-field practices for three new full-time assistant coaches who joined Mike Houston's staff during the off-season — Tim Daoust (special teams coordinator/DEs/OLBs), Chris Foster (RBs) and Latrell Scott (passing game coordinator/IRs/TEs) ... Additionally, Friday's practice was the first under new institutional leadership as ECU Chancellor Dr. Philip Rogers officially began his duties Monday ... Rogers had an earlier stay at East Carolina from 2007 to 2013 (first as policy analyst, then chief of staff), a seven-year period where the Pirates averaged nearly eight wins per season, captured a pair of conference championships and made six bowl appearances.
Go Back