New study: Face masks do not prevent spread of Covid 19. Media covers it up | Beaufort County Now | It's about people control, not disease control

New study: Face masks do not prevent spread of Covid 19. Media covers it up 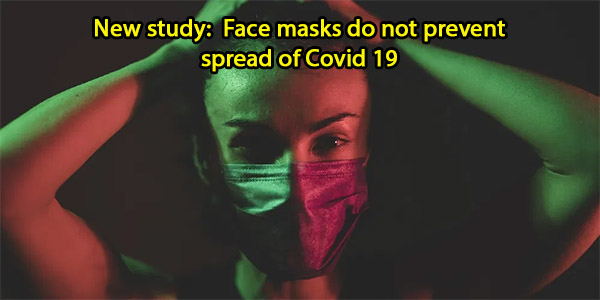 A peer-reviewed study done by Stanford University demonstrates beyond a reasonable doubt that face masks have absolutely zero chance of preventing the spread of Covid-19?  It was posted on the the National Center for Biological Information government website. The NCBI is a branch of the National Institute for Health, so one would think such a study would be widely reported by mainstream media and embraced by the “science-loving” folks in Big Tech.

Instead, a DuckDuckGo search reveals it was picked up by ZERO mainstream media outlets and Big Tech tyrants will suspend people who post it, as political strategist Steve Cortes learned the hard way when he posted a Tweet that went against the face mask narrative. The Tweet itself featured a quote and a link that prompted Twitter to suspend his account, potentially indefinitely.

The existing scientific evidences challenge the safety and efficacy of wearing facemask as preventive intervention for COVID-19. The data suggest that both medical and non-medical facemasks are ineffective to block human-to-human transmission of viral and infectious disease such SARS-CoV-2 and COVID-19, supporting against the usage of facemasks. Wearing facemasks has been demonstrated to have substantial adverse physiological and psychological effects. These include hypoxia, hypercapnia, shortness of breath, increased acidity and toxicity, activation of fear and stress response, rise in stress hormones, immunosuppression, fatigue, headaches, decline in cognitive performance, predisposition for viral and infectious illnesses, chronic stress, anxiety and depression. Long-term consequences of wearing facemask can cause health deterioration, developing and progression of chronic diseases and premature death. Governments, policy makers and health organizations should utilize prosper and scientific evidence-based approach with respect to wearing facemasks, when the latter is considered as preventive intervention for public health.