Protecting your right to grow your own food | Beaufort County Now | Do you know where your food comes from? Aside from saying Harris Teeter, Food Lion, or Wegman’s, it is an important question to many North Carolinians.

Protecting your right to grow your own food

Published: Friday, December 31st, 2021 @ 11:00 am
By: Carolina Journal   ( More Entries )
Publisher's Note: This post appears here courtesy of the Carolina Journal. The author of this post is Theresa Opeka. 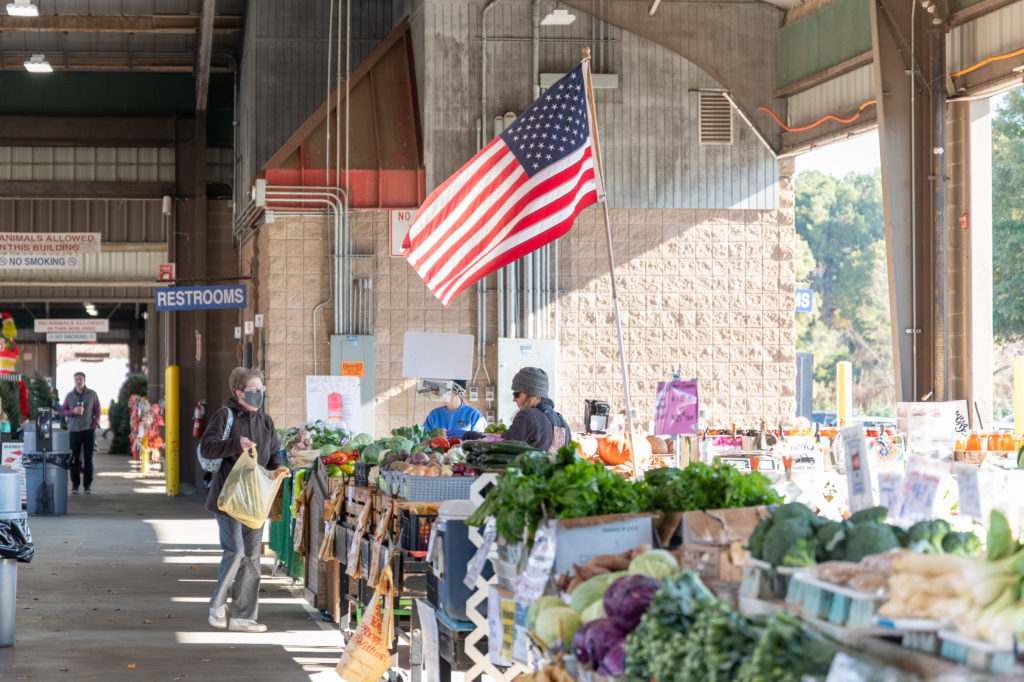 An American flag is flown over a produce stand at the state farmers market in Raleigh. Photo by Maya Reagan, Carolina Journal


Do you know where your food comes from? Aside from saying Harris Teeter, Food Lion, or Wegman's, it is an important question to many North Carolinians.

In a recent Civitas poll by the John Locke Foundation, 36% of 600 people surveyed said they "very often" check labels to see which country or state produces the food or beverage they purchase. Nearly 85% of respondents said it is important to know that their food comes from the United States rather than another country, and 78.5% say it is important to know their food comes from North Carolina versus another state.

The poll also asked about the importance of having a protected right to grow your own food. Seventy-five percent of those surveyed support an amendment to the N.C. Constitution to declare that all individuals have a natural, inherent, and unalienable right to grow, raise, harvest, produce, and consume the food of their own choosing for their own nourishment, sustenance, bodily health, and well-being.

"I'm not surprised by these polling results," said Donald Bryson, Locke president and chief strategy officer. "We live in a time when the electorate is increasingly skeptical of big business and big government. The supply chain situation has only exacerbated this situation, and people want their households and communities to be more self-sufficient."

"Support for the 'Right to Food' amendment in North Carolina holds strong across every significant demographic, suggesting that market-driven policies in agriculture don't have to become a partisan battleground," Bryson added.

People want to know where their food comes from. You don't have to look any further for proof than to see the popularity of farmers' markets like the State Farmers Market in Raleigh, Western North Carolina Farmers Market in Asheville, or any roadside stand that sells fresh produce and other locally produced items.

Supply chain issues have only strengthened that demand. Workers have been in short supply in some industries due to the pandemic, including the turkey industry, leading to a shortfall of available items. The trucking industry has also been affected, with a shortage of 80,000 drivers nationwide, according to the American Trucking Associations.

That number is expected to climb to 160,000 by 2030. Numbers started to dwindle a decade ago with baby boomers starting to retire, but the pandemic only elevated the issue. According to the North Carolina Trucking Association, nearly 86% of North Carolina's communities rely solely on the trucking industry to get goods delivered.

Maine paved the way for food security and independence by becoming the first state in the United States to protect the right to grow and raise food earlier in November. Voters in Maine approved a similar amendment that also included protection for rights to seed saving and seed sharing.

While many favor the amendment, including The Maine Organic Farmers and Gardeners Association, others, like the Maine Farm Bureau, are not. They foresee possible issues like people raising domesticated animals like cats and dogs for food, because of the openness of the amendment.

Opponents also say the language of the amendment is vague, causing worry about legal issues, property rights, animal rights, and food safety. Those in favor disagree, saying it doesn't cause issues with current legislation and restrictions and serves to protect against potential encroaching of corporations.

MOFGA and others say the amendment only strengthens the local food economy and creates a more secure food system, especially during the uncertainty of the current supply chain issues the country is facing.

Whether a similar amendment has a path forward in North Carolina is not clear at this point, but the momentum is present nationally. Individuals' need to know where their food is produced is unlikely to change anytime soon.
Go Back