This should be at all schools 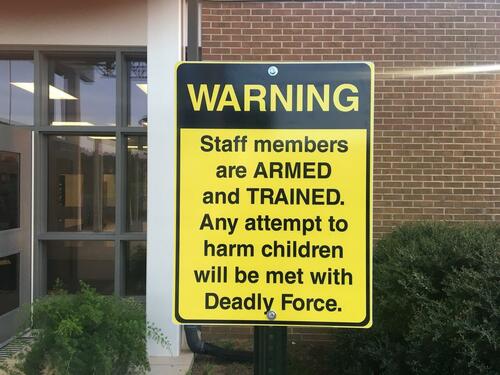 The latest sign at least one school is trying something different -- instead of inaction -- is a private school in Texas that will soon allow teachers certified in a new firearms course to carry weapons on them at all times in school, according to Victoria Advocate, a daily newspaper published in Victoria.

Faith Academy will soon allow school personnel to carry concealed handguns. Training begins in the next couple of weeks and will involve dozens of hours of firearms training, which addresses student protection, interaction with first responders, tactics for denying intruders entry into a school, and increased handgun accuracy.

Faith Academy is planning on implementing a program that will allow teachers and staff to carry weapons at school.

The private Victoria Christian school is joining several area school districts in taking advantage of a Texas law that gives school officials the authority to let private individuals have guns on school premises, which is otherwise illegal.

This provision is often called the "guardian plan" or "guardian program," though that name is not official.

Unlike most of the public school districts that have implemented such a plan, Faith's teachers and staff will have the guns on their person during the school day, according to Principal Larry Long. -- Victoria Advocate

So glad to see another school doing what should have been done a long time ago to protect children.  The sign at the tip should be posted at all schools.

Did anyone else notice we did not seem to have all the gun violence until the govt. declared a war on guns and vilified them?  Like the war on drugs made the drug problem worse as with all the other war on things the govt. has declared.