A recent survey reported massive school staffing shortages in North Carolina in August. That's roughly 11,000 vacancies, which would impact the quality of education students receive. How those positions would be filled and why are so many teachers and staffers leaving the education profession, is certainly a legitimate question.

We won't, however, be able to answer all of that definitively until next spring, when school personnel data is released. Still, we do have annual data on full-time staff employment. So, it is possible to see how teacher and staffing levels have changed over the past four years.

Table I provides data on enrollment, staff levels, and teacher and staff ratios from from 2018-19-the last full year before the pandemic-to 2021-22. What did we find?

While the number of students and teachers has declined over the same time, the number of full-time staff has increased by 552, growing from 173,266 to 173,818.

The biggest jump in staff hiring occurred in the first year of the pandemic (2019-20), when staffing grew by 853. Of the new hires, 512 were teachers, proceeded by a decline. Despite the decrease in the number of teachers, total staff numbers increased briefly in 2019-20, declined the following year, and rebounded again in 2021-22, when 1,254 additional full-time staff were added to public school rolls.

Policymakers frequently like to talk about staff in terms of ratios, such as teachers per student or staff per student.

How has the pandemic impacted school staffing in North Carolina? While we hear a lot of talk about thousands of vacancies, we won't have definitive staffing numbers until next spring. Until then it might be good to take the long view. Remember the pandemic led to a loss in enrollment and decline in the number of teachers, but far less than the current ratios would suggest. In addition, the decline in the number of teachers were offset by an increase in staff to handle other pandemic related responsibilities. 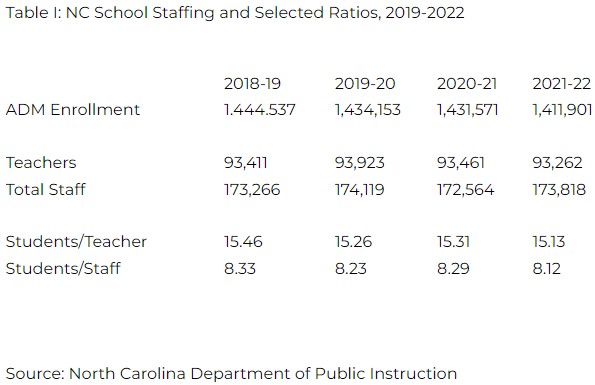