McCarthy becomes speaker without a majority of votes 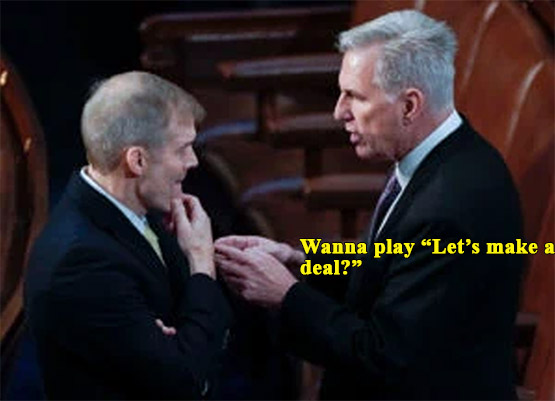 Graham J. Noble, writing at LibertyNation.com reports:
After 15 rounds of voting, House Republicans finally elevated Rep-elect Kevin McCarthy (R-CA) to the speaker position for the 118th Congress on Saturday, Jan. 7. The former House minority leader managed to flip 14 GOP holdouts in the first vote on Friday. McCarthy needed to strike a deal with the House Freedom Caucus, a group of the most staunchly conservative Republicans who were never going to roll over and give the GOP leader, who they view as too establishment, an easy path to the speaker’s chair.

On the 13th vote, another Republican resister switched his vote to McCarthy, but six GOPers still cast their votes for Rep-elect Jim Jordan (R-OH). The House then voted along party lines to adjourn until that evening; Democrats tried to defeat the motion but were unsuccessful.

Shortly after 10 PM on Friday, members cast their votes for the 14th time. This go around, McCarthy got a breakthrough when two GOP reps-elect who had vowed not to support him, Lauren Boebert of Colorado and Matt Gaetz of Florida, voted “present.” Though a candidate for speaker normally needs 218 votes, he or she actually requires the support of the majority of those who are casting votes. Gaetz and Boebert had, essentially, abstained by voting present and McCarthy fell just one short of securing the speaker’s gavel.

McCarthy the Only Man for the Job?

Another motion to adjourn until noon on Monday was proposed. Once again, every Democrat voted “nay” but, this time, they were joined by enough Republicans to easily defeat the motion. It seemed they had sensed an end to the drama was imminent. In what was to be the final round of voting, the last McCarthy critics – most notably, Reps-elect Andy Biggs (R-AZ), Bob Good (R-VA), and Matt Rosendale (R-MT) – also voted “present,” allowing McCarthy to haul in a majority of 216 votes.

It was really only going to end one way. McCarthy, driven either by ego and lust for power or by a sense of duty – depending on one’s opinion of the man – was never going to step aside and relinquish the gavel, no matter how many votes it took. At the same time, there was clearly no other Republican who could come close to securing a majority. The one man whose name was called out the most by those who didn’t want McCarthy was Jordan, who obviously did not want the job of speaker.

Did this brief Republican civil war over the speakership help or hurt the party? Did it prove them unfit to govern, as Democrats suggested? Or did it show that this is a party trying to evolve while certain establishment forces within attempt to prevent that evolution and turn back the clock? The challenge to McCarthy was never so great a threat that his ascension to the speaker’s chair was in serious doubt. An indication, perhaps, that, since the 2020 presidential election, the Swamp-dwellers of the GOP have once again gotten a firm grip on the leadership. Kevin McCarthy will need to prove that he is willing to stand up to the Democrats – and stand up for conservative principles – to convince the party’s voting base that there is still hope for the GOP.