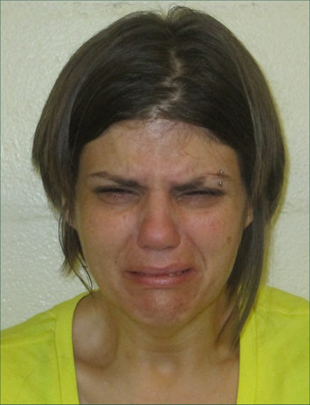 Angela Heine Hamilton
On August 2, 2013 at approximately 10:00 p.m., Deputies with the Beaufort County Sheriff’s Office Patrol Division responded to Highway 33 East in Edward to assist a Trooper with the North Carolina State Highway Patrol. The Trooper had an impaired driver stopped that was uncooperative. When Deputies arrived, they assisted by placing the combative subject in the rear of a Beaufort County patrol car.

Before transporting the driver from the scene, the subject began to damage the interior of the patrol car by kicking and slamming her head against the windows. When Deputies tried to intervene, the subject kicked a Deputy and spit on his arm and uniform.

As a result, Corporal Jonathan Fowler charged Angela Heine Hamilton, age 39 of Highway 306 South in Aurora with Malicious Conduct by a Prisoner and Assault with Physical Injury on an LEO. Hamilton was also charged with DWI, Possession of an Open Container, and Failure to Comply with License Restrictions by NCSHP