N.C. Should Avoid Push To Target Corporate Tax Havens | Beaufort County Now | Last month, the U.S. Senate held a committee hearing on offshore tax evasion and published a report stating that foreign tax havens have cost the United States $150 billion a year in lost revenue. The report didn't include any information about the states' tax losses, yet states have the ability...

Published: Monday, March 17th, 2014 @ 7:22 pm
By: John Locke Foundation   ( More Entries )
Publisher's note: The author of this post is Sarah Curry, who is Director of Fiscal Policy Studies for the John Locke Foundation. She is also a contributor to the Carolina Journal, John Hood Publisher.

RALEIGH — Last month, the U.S. Senate held a committee hearing on offshore tax evasion and published a report stating that foreign tax havens have cost the United States $150 billion a year in lost revenue. The report didn't include any information about the states' tax losses, yet states have the ability to tax offshore revenue, and they want their share. Some states are taking legislative action to gain more revenue and keep corporations from using tax havens to avoid their corporate income taxes.

When legislators promote their anti-tax haven legislation, they often refer to "closing loopholes." One example is Minnesota. The governor wants to "close loopholes" and also lower the rate, yet his tax plan would include the offshore profits of corporations in the state's corporate income tax. So, is he closing loopholes or broadening the base so the rate reduction doesn't hurt his state's revenue? With the third-highest corporate income tax rate in the nation (9.8 percent), he probably fears lowering the rate unless it is a revenue-neutral change, which explains his wanting to expand the base to offshore corporate profits.

Most states in America collect taxes on corporate income. The tax targets a portion of the amount of money a company makes in that state. According to the Tax Foundation, Nevada, South Dakota, and Wyoming do not have any corporate income tax. Ohio, Texas, and Washington also do not have corporate income tax, but do have gross receipts taxes for corporations. Typically, if a company does business in multiple states, then it pays taxes on the amount of income it earns in each state respectively, according to that state's tax law.

The concern is coming from multinational companies that hide earnings in offshore tax havens to avoid paying taxes on that money. There has been some disagreement on the complete list of countries that serve as tax havens, but the most familiar are the Cayman Islands, Bermuda, and Luxembourg. Some also argue there are also tax havens within the United States, such as Delaware, Nevada, and Wyoming, that need to be addressed.

Some states have decided to try to collect revenue from multinational corporations that avoid state taxes by moving earnings to offshore tax havens. It has been estimated that states on average could collect more than $20 billion each year in additional corporate income taxes, if they were able to include this income from tax havens. The movement for states to collect this tax revenue began around 2000.

Montana was the first of the states to implement these tax changes and has served as a model for other states since passage of its law in 2004. After a decade, data is available on the change in revenue generation this tax change has had for the state. Corporate tax collections have increased between 5 percent and 7 percent (PDF) since the law's passage. In 2010, the state of Montana collected $7.2 million in extra revenue. Oregon, which passed its law in 2013, is expecting an additional $18 million in 2014.

Maine lawmakers introduced a bill in last year's legislative session that would add 38 known offshore tax havens to the formula for calculating corporate tax collections in the state. The Maine Legislature's Joint Taxation Committee voted 8-5 in favor of the bill last month, and it is expected that the full legislature will follow suit when the bill is revisited this year.

Both Alaska's and West Virginia's tax codes require companies with subsidiaries in tax havens to include that revenue in their income tax reporting. However, specific tax havens are not listed in those tax codes. One of the most popular domestic tax shelters is the state of Delaware, which allows companies to shift royalties and similar revenues to holding companies in the state, where they are not taxed. According to a study, corporations have taken advantage of Delaware's rules and have saved an estimated $9.5 billion in taxes they would otherwise have paid to other states. As of 2014, 24 states and Washington, D.C., have combined reporting, meaning corporations must report worldwide earnings to the state. See the map below: 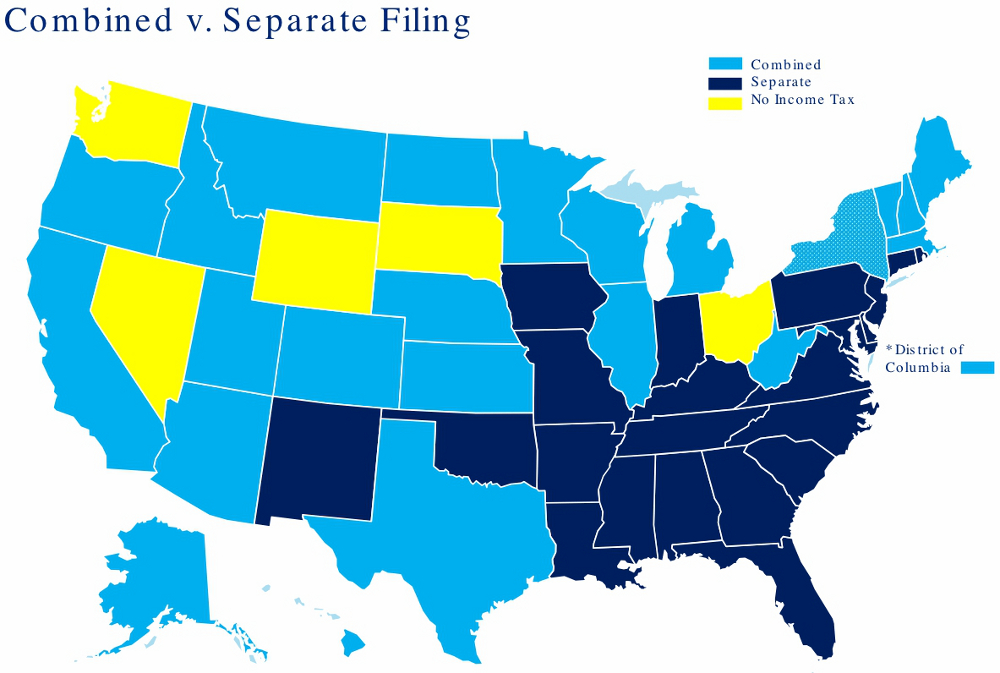 What it means for North Carolina

Being aware of what other states are doing will help North Carolina be more competitive for business investment. You notice from the above chart that Southeastern states do not require corporations to file a combined report, and are thus unable to tax offshore earnings. Over the last 10 years, we have seen states in the Southeast lowering their corporate income tax rates, and with that, more businesses are moving to these states. The good thing is that, with more and more states in the West and Northeast including these offshore profits in their corporate income tax rates, more businesses will leave those states and come to states like North Carolina.

Corporations want to make money, not face additional taxation. They will relocate to areas that have a less complicated tax code and lower tax rates. According to a John Locke Foundation Spotlight by Dr. Roy Cordato:

So the answer is NO. States should not collect state corporate income taxes from offshore accounts. But if states do decide to do this, then North Carolina will reap the benefit with a lower tax rate and simpler tax code.
Go Back