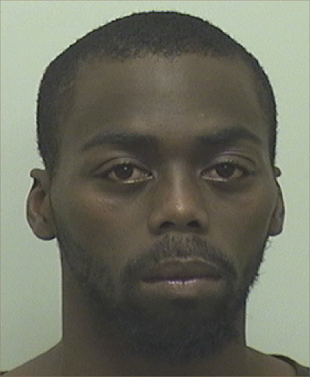 Akeem Javal Williams
On April 2, 2014 at approximately 12:31 p.m., Deputies with the Beaufort County Sheriff’s Office assisted the North Carolina State Highway Patrol with a motor vehicle crash involving a pedestrian on River Road in Washington, NC. Witnesses at the scene of the crash reported that the driver discarded a handgun immediately after the wreck.

During a search of the area, Corporal Jim Martin recovered a Ruger 9mm handgun from a wooded lot near the scene. A search of the vehicle involved in the crash produced marijuana, assorted drug paraphernalia, a game system and other electronics. Two financial transaction cards were also found in the vehicle.

As a result, Cpl. Jim Martin applied for and obtained warrants charging Akeem Javal Williams, age 23, of Montclair Drive in Washington with Possession of a Firearm by Felon, Simple Possession of Marijuana, and Possession of Drug Paraphernalia. The NCSHP charged Williams with several offenses related to the motor vehicle crash. Williams was transported to the Magistrate’s Office and held in the Beaufort County Detention Center on a $20,000.00 secured bond.

Further investigation identified several items found in the vehicle as recently stolen from locations in Pitt County. On April 7th, Williams was served with warrants from Pitt County charging him with First Degree Burglary, Felony Larceny, two counts of Breaking and Entering a Motor Vehicle, and two counts of Misdemeanor Larceny. Williams was held on an additional $75,000.00 secured bond.