Published: Monday, May 19th, 2014 @ 8:36 pm
By: John Locke Foundation   ( More Entries )
Publisher's note: The authors of this post are the CJ Staff of the Carolina Journal, John Hood Publisher. 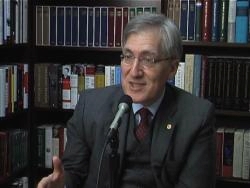 Robert George
RALEIGH — Good constitutional structures are necessary, but not sufficient, to protect the American system of government. The nation needs civic virtue as well. That's the argument Robert George put forward in the 2014 John W. Pope Lecture at N.C. State University. George is McCormick professor of jurisprudence and founder and director of the James Madison Program in American Ideals and Institutions at Princeton University. He discussed the importance of civic virtue with Mitch Kokai for Carolina Journal Radio. (Click here to find a station near you or to learn about the weekly CJ Radio podcast.)

Kokai: Those are some very big items: constitutional structures, limited government, civic virtue — why tie them all together in this speech?

George: How does our constitution preserve liberty and prevent tyranny? The issue faced the founders of our country quite squarely. They knew what tyranny was. They'd experienced it under the old regime. But when they successfully liberated themselves from domination, from England, they then faced the question, "Well, how do we avoid creating the same problem on a homegrown basis?"

And so their answer was to create constitutional structures that would preserve liberty and prevent tyranny by limiting the size and scope and intrusiveness of, in particular, the national government, the federal government, ensuring that they wouldn't slip back into the situation they had under a strong central power when that power was in Westminster.

But our founders recognized that constitutional structures, as important as they are for the preservation of liberty and the prevention of tyranny, are not by themselves sufficient to achieve those goals. More is needed. And among the things that are needed is what we call civic virtue. That is, the understanding, the self-restraint, the principled conviction in the people themselves that would allow them to function as the true guardians of their own freedom.

Kokai: You mentioned that the founders understood the importance of having both the structures and the civic virtue. Do we understand that as well today in America?

George: I'm afraid we don't, and I think that's a failing really, at the pedagogical level, at the educational level. We're failing to transmit to each new generation of young people the importance of leading virtuous lives if I can be very candid about it. Unfortunately, there's a view of freedom that's abroad in the culture, which detaches it from virtue, detaches it from morality, detaches it from any moral ordering. This is quite alien to the thought of our founders. Our founders easily distinguished license from liberty. And they were for liberty, but they were against license. In part they were against license because they knew that it was toxic for liberty.

We need to be able to govern ourselves, exercise self-restraint, be concerned for our own communities and not just for our narrow self-interests. We need to do all those things if we are to preserve liberty itself. So the slogan of the so-called "Me" generation — "if it feels good, do it" — which has been now internalized by successive generations after the generation of the '60s and '70s, is a real danger to the long-term preservation of liberty.

And that's why I think we need to redouble our efforts at the educational level. Parents, teachers at the school level, and also university teachers like myself, reminding people of what Washington perfectly well understood. We hear him say it in his farewell address. What Adams, the second president, Washington's successor, so well understood. What so many of our founders themselves articulated. And that is that a free people to be permanently free, to be securely free, must be, at the same time, a virtuous people.

Now does that mean everybody's got to be perfect? No, nobody's perfect, nobody will be perfect. The founders also understood that old Christian concept of original sin. And in part as Madison reminds us in Federalist No. 10, in part the reason we have government is because we have weakness of the will. We have selfishness.

George: We're not angels. That's right. We're sinners. But we're still capable of exercising the virtues on which liberty ultimately depends, and we need to encourage those, inculcate those in our children. Teach them to each new generation, and make sure that each new generation understands their importance. We will not continue to be a self-governing people in the political sense if we lose the capacity to govern ourselves, our own desires, our own appetites, our own passions, in the personal sense.

Kokai: If we do a better job of inculcating this idea of civic virtue among the population, what sorts of benefits are we going to see in our society?

George: One thing I think we would see is a rebuilding of the institution of the family and a strengthening of the other institutions of civil society, which along with the family must play the primary roles in inculcating virtue and helping people to understand their responsibilities as well as their rights and so forth.

We're suffering now because of the collapse of our institutions of civil society — families, religious institutions, civic associations of every description, fraternal organizations — that, as Tocqueville reminded us as far back as the 1830s, really are essential to the good functioning of the American scheme of ordered liberty, morally ordered liberty.

If the institutions of civil society fail, if they collapse, if they are eroded, what will happen? Well, we know perfectly well what will happen. Government will step in to play the role that should be played by the family, to play the role of father to the orphan, provider to the mother of the child with no father in the picture. And when government moves in, government grows. It becomes more intrusive. The tax burden increases.

There are some people, Mitch, who think that there's some kind of tension or conflict between economic conservatism, as they call it, and social conservatism, as they call it. My heavens, the opposite is true. I have a new book out called Conscience and Its Enemies, and in the very first chapter I try to explain why economic and social conservatives, far from being adversaries, are singing from the same hymn book.

So it's time for economic and social conservatives to stop being suspicious of each other and to work together, realizing that they have common goals. What is ironic, Mitch, is that the left understands this perfectly well. It's amazing. Socialists always attack two things. What are they? The free-market economy and the family. They know the connection. Why can't those of us on the conservative side see what they see?