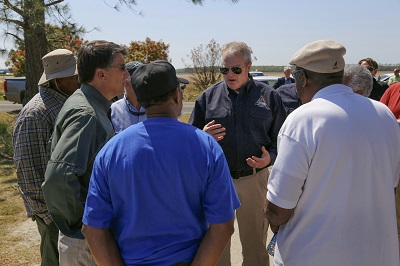 The governor and North Carolina Emergency Management Director Mike Sprayberry met with residents in Perquimans County during their survey of the storm damage.
Raleigh, NC     Governor Pat McCrory announced today that financial assistance is available to help individuals and business owners recover from damages caused by the April 25 tornadoes that struck eastern North Carolina. The governor received a U.S. Small Business Administration disaster declaration for Beaufort, Pasquotank, Perquimans and their adjacent counties, including Chowan. Today he proclaimed a state disaster declaration enabling those who do not qualify for SBA loans to seek state funds to help repair and replace personal property.

"Families and small business owners can take some encouragement that they will have a financing element to help replace some of their losses and begin rebuilding in earnest," said Governor McCrory, who noted that North Carolinians can apply for aid beginning tomorrow. "This assistance will help families and small business owners get back to normal after going through some trying times."

The U.S. Small Business Administration disaster declaration means that residents and business owners in the declared and adjacent counties can apply for low-interest federal loans in the following amounts:


Governor McCrory's top priority was getting relief as fast as possible for families and small businesses, which is why he declined to appeal FEMA's denial for federal assistance and instead immediately sought a quicker avenue for relief through the SBA.

Beginning tomorrow, state and federal emergency management agency representatives will staff three Disaster Loan Outreach Centers to help individuals complete their applications. Each of the centers will be open from 9 a.m. until 6 p.m. Friday, May 16 through Thursday, May 22. The centers will be closed on Sunday, May 18.

Teams from local, state and federal agencies spent a week surveying storm damage in Beaufort, Chowan, Pasquotank and Perquimans counties. Initial reports indicate more than 100 homes incurred major damage or were destroyed by the storms, while 400+ others suffered minor damages.

Nine tornadoes swept through the state April 25, killing one and injuring 28 others. An EF3 tornado with winds of 150 miles per hour caused a 21-mile path of destruction across Beaufort County. Two EF2 tornadoes – with winds up to 125 miles per hour – tore 35- and 40-mile paths across Bertie, Chowan, Perquimans and Pasquotank counties. The storms caused significant damage in 17 counties, flooding roads, toppling trees and knocking out power to more than 6,000 residences and businesses.
Go Back