Login to Send a Private Message to Stan Deatherage
Publisher's Note: These posts, by Dr. Terry Stoops, and aptly titled CommonTerry, appears courtesy of our friends at the John Locke Foundation. A full account of Dr. Stoops's posts, or him mentioned as a credible source, are listed here in BCN.

Public school funding: Where does the money come from?


Where does the money for our K-12 public schools come from? You.

But state, local, and federal governments use your tax dollars to fund our education system at different levels. In this week's CommenTerry, I take a closer look at this issue.

One of the unique characteristics of education funding in North Carolina is the fact that a relatively high percentage of revenue comes from state sources. According to National Education Association (NEA) estimates for the 2013-14 school year, the national average share of state revenue for public education is just over 46 percent. In North Carolina, it exceeds 61 percent, which is the highest in the southeast and the eighth highest nationally. North Carolina's state revenue share is an outlier in the region. (See Facts and Stats below for the state-by-state ranking.)

Although seldom recognized during teacher pay debates, NEA researchers correctly note that "no set of tables tells the entire story of a state's education offerings." Indeed, school funding systems have deep historical and political roots, which complicate state, regional, and national comparisons. Throughout the eighteenth and nineteenth centuries, colonies, states, and the federal government allocated very little revenue to public schools. After all, formal schooling was an ad hoc enterprise in most communities, as parents and churches assumed much of the responsibility of educating their children. The most consistent revenue stream came from local property taxes, philanthropy, and, yes, lotteries.

When state legislators opted to fund public schools, they often chose to direct that funding to poor, orphaned, and disabled children, rather than the school-age population as a whole. Compulsory attendance laws and The Great Depression, however, prompted members of the N.C. General Assembly to shift the primary responsibility for funding public schools from local governments to the state, and it has been that way ever since. Other states followed suit.

The centralization of school funding has both positive and negative aspects. It allows states to distribute education dollars in a way that accounts for local economic conditions, specifically the ability of the locality to generate tax revenue through property taxes. As a result, schools in poor counties are not penalized (and wealthy counties are not rewarded) for the ability to generate revenue.

On the other hand, with great money comes greater control. State-focused funding systems give state education leaders and elected officials leverage to disseminate their chosen reforms and regulations. Unions and public school advocacy groups benefit greatly from this system. Rather than lobby each school district individually, they can concentrate their efforts on a relatively small group of decision-makers at the state capital.

Legislators can make a plausible argument that localities should have a greater role in funding public schools, which would bring us in line with other states in the region. After all, education revenue in neighboring South Carolina is almost evenly split between the state and local governments. By virtue of their tax and governance structure, a number of other states in the southeast have a greater dependence on local revenue than on state funds.

The question is whether state lawmakers should begin the long-term process of shifting more school funding responsibilities to local governments. Even if the benefits outweighed the costs, the political and legal consequences of such a massive change may be too much for any political party to bear. 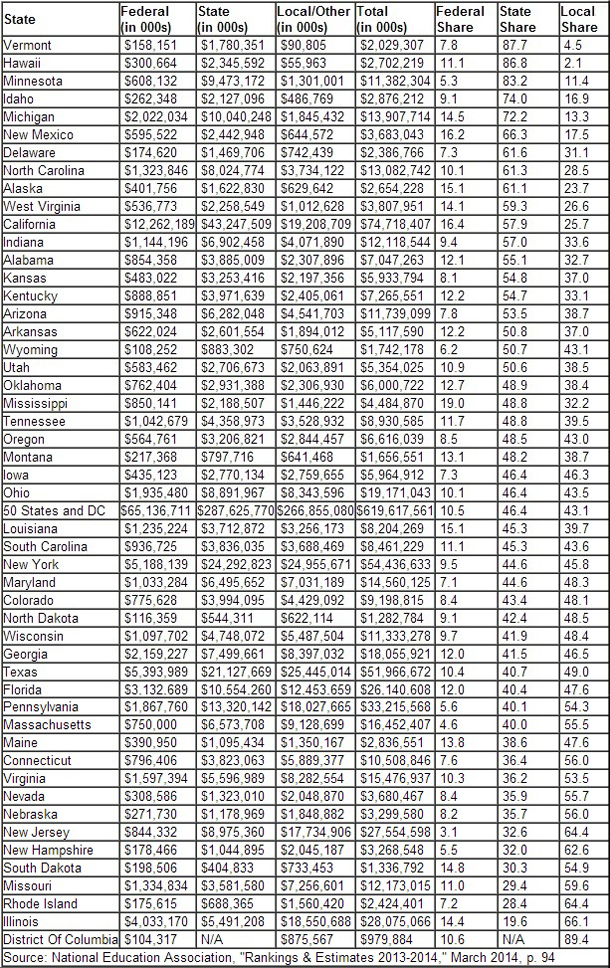 Publisher's Note: These posts, by Dr. Terry Stoops, and aptly titled CommonTerry, appears courtesy of our friends at the John Locke Foundation. A full account of Dr. Stoops's posts, or him mentioned as a credible source, are listed here in BCN.

Acronym of the Week

"Of course, no set of tables tells the entire story of a state's education offerings. Consideration of factors such as a state's tax system, provisions for other public services, and population characteristics also are needed. Therefore, it is unwise to draw conclusions based solely on individual statistics in this report. Readers are urged to supplement the ranked data with specific information about state and local service activities related to public education."