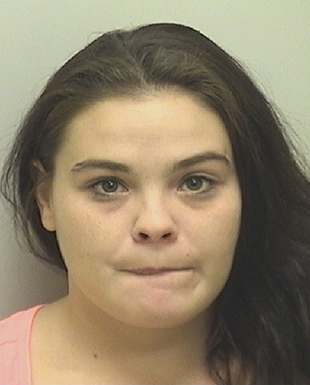 Jennifer King
On August 8, 2014 at approximately 11:41 p.m., Corporal Cody Burroughs of the Beaufort County Sheriff's Office Patrol Division was patrolling the Highway 264 West area of Washington, NC. Cpl. Burroughs observed a vehicle operating with only one headlight. He conducted a traffic stop on the vehicle and made contact with the driver.

During the stop, Burroughs formed the opinion that the driver was impaired. The driver stated she did not have her license with her and provided a name. Cpl. Burroughs arrested the driver and charged her with Driving While Impaired under the name she provided. She was released after posting a $500.00 secured bond.

On August 9th, Cpl. Burroughs received information that the female had given him someone else's name during the stop. Burroughs conducted an investigation and determined that the female's true name was Jennifer Todd King, age 24 of Bellcrest Avenue in Washington, NC. As a result, Cpl. Burroughs applied for and obtained warrants charging King with Identity Theft, Driving While Impaired, and Driving While License Revoked. King turned herself in at the Sheriff's Office on August 9th and was released on a $1,000.00 unsecured bond. The vehicle King was driving at the time of the stop was subsequently seized under the NC DWI Vehicle Seizure law.