Following National Search | Eastern North Carolina Now | Ron Mitchelson has been named provost at East Carolina University after serving in the role on an interim basis since last year. The ECU Board of Trustees made Mitchelson's position permanent at their meeting today. After a national search, Chancellor Steve Ballard selected Mitchelson from what...


Ron Mitchelson has been named provost at East Carolina University after serving in the role on an interim basis since last year.

The ECU Board of Trustees made Mitchelson's position permanent at their meeting today. After a national search, Chancellor Steve Ballard selected Mitchelson from what he described as "an excellent pool of candidates." 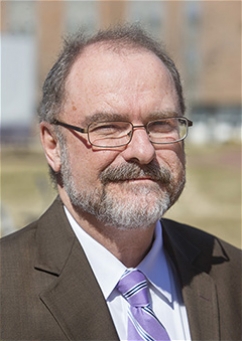 Ron Mitchelson (Photo by Jay Clark)
After the board's unanimous vote to approve Mitchelson for the position, the decision was greeted with a round of applause from the audience. Asked if he had any further comments on Mitchelson's appointment, Ballard said, "I believe the applause speaks for itself."

A geographer, Mitchelson has been at ECU since 1999. He chaired the geography department and served as interim chair of the English department. In 2011 he was appointed to chair ECU's Program Prioritization Committee, which evaluated programs campus wide and examined the university's academic structure.

"Ron Mitchelson has proven himself as department chair, associate vice chancellor and now interim vice chancellor," said Ballard. "He has excellent experience with the Program Prioritization Committee and the Committee on Fiscal Sustainability. He has earned the respect of his colleagues. We had a competitive national search, and Ron was easily the choice, in large part because of his proven leadership qualities and values." 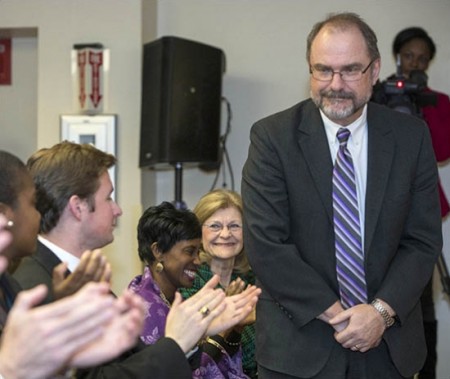 Newly appointed Provost Ron Mitchelson stands to receive congratulations from the audience at the Board of Trustees meeting Feb. 20. (Photo by Cliff Hollis)
As provost, Mitchelson will serve as ECU's chief academic officer with oversight of academic programming, enrollment management, institutional planning and research, and equity and diversity. His salary of $297,000 must be approved by the University of North Carolina Board of Governors.

During his six months as interim provost, Mitchelson guided the development of ECU's new strategic plan, which sets the course for the university for the next five years. He said he's "honored and will work tirelessly" to achieve the school's mission and the priorities set out in the strategic plan, primarily student success, regional transformation and public service.

The time as interim provost has provided valuable training, he said.

"I think I've learned a lot more about some of the parts and pieces of the university I was less familiar with," he said. "Those experiences really have helped me come to a deeper understanding of ECU and the university system as a whole."