Extract | Eastern North Carolina Now | Mike Judge, the personafication of hit or miss, writes and directs what will become a comedy classic.

At least that has been my history with this creative genius that when he hits, he knocks it out of the park, and when fails - it's a veritable a belly-flop. "Extract," a short 92 minute community 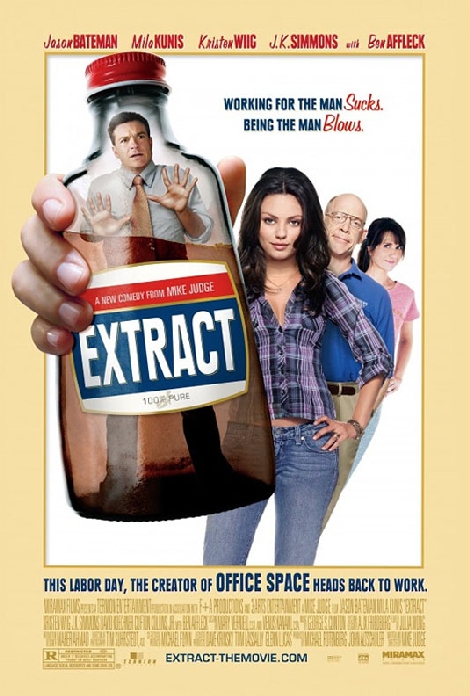 inspired morality play, is no dinger. It is full frontal assault upon one's funny bone that just doesn't let up. But then that's just my subjective opinion.

My ongoing Mike Judge opinion: "Beavis and Butthead" - makes fun of heavy metal fanatics / idiots - didn't like it, but I get the premise; "King of the Hill" - purely a classic, could be the best 'toon ever done; "Office Space" - a box office flop - but a comedy classic about life under Lundberg; "Idiocracy" - makes fun of really stupid people in a nation, in the distant future, that has recently initiated the celebration of the condition - great premise (sound familiar), it sadly, just did not work for me as a film; "Extract" - well, just finish the review.

In the context of hit and miss, "Extract" makes its mark as yet another box office flop, which, like "Office Space," continues to resonate with those of us who find humor in mighty strange places. I suppose that is the subtlety of the hit and miss concept. With the hits, once you start laughing, the simplest humor makes you laugh that much more. It makes one wish to watch the film yet again once you give it a good rest, and since 1999, I have given "Office Space" quite a few good rests. "Extract" will prove to be no different.

In fact, in countless contexts, they are virtually the same film: different workplace, no America's sweetheart wearing exactly 15 pieces of flair, no unknown actor making the "O. face," no Milton, but yes, there is a version of Lundberg, and yes the hero hates his job. This time he is the boss.

Jason Bateman is Joel Reynolds, a once young industrious chemist turned flavor extract entrepreneur, who thinks he hate his job, but actually, he just doesn't understand the direction his life has taken. His wife, Suzie, portrayed by current Saturday Night Live standout Kristen Wiig, is in a huge rut and she is quite content to drag Joel down deep in its depths. The only solace Joel can find is the partaking of libation dispensed by his former associate / bartender, Dean, a shaggy visionary of inordinate skill in the equal dispensation of various narcotics. Ben Afleck is Dean, and he is superb as the lost leader of the near despondent Joel. 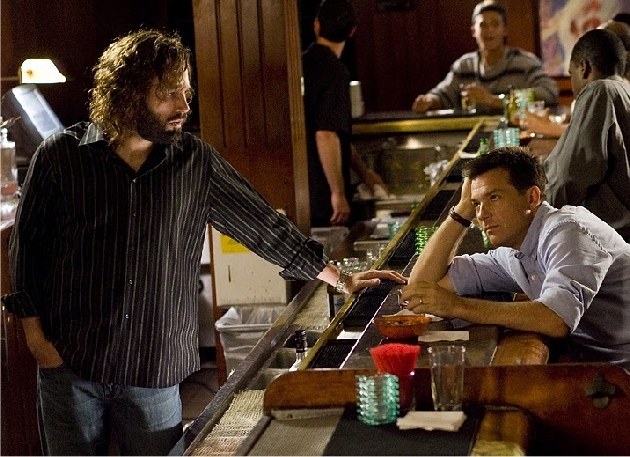 Ben Afleck as Barkeep Dean is a walking poster child of why humans of all ages should never do drugs: Above. Lineworker Jim, a disguised Mike Judge, eplains to the multi-pierced head-banging idiot the subtleties of aquisitions: Below. 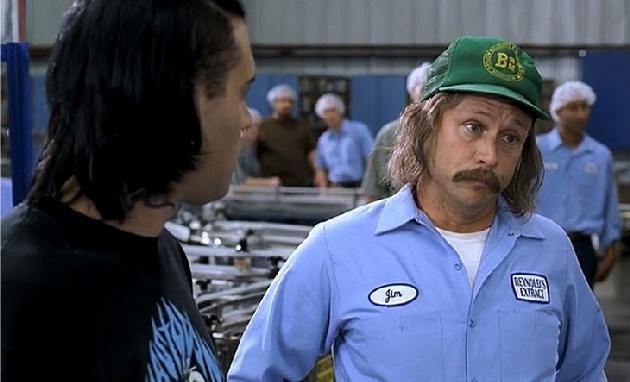 When Joel searches for a kernel of inspiration to struggle on, Dean slips him a horse tranquilizer and convinces him to hire young Gigolo, Brad, to entrap his wife in an infidelity with Brad, while he pretends to be a diligent pool-boy. Diligent he is not, but after 15 (what's up with the number 15) marital indiscretions by Suzie, she realizes and well appreciates Brad's true talent. All the while, a disavowing Joel is incredulous when Brad lunges into the deep for free, and his once frigid wife is such a willing partner - I repeat, 15 times. And to add insult to injury, Brad played by Dustin Milligan, the young, somewhat stupid Gigolo who falls in love with Suzie, and Suzie's infatuation comes to an abrupt halt. As the repentant male whore struggles to give voice to his young love for Joel's wife, the silent soundtract modulates to one that resembles that of a soap opera's. When Brad's near illiterate uttered words come to an end, the music stops. Nice touch. 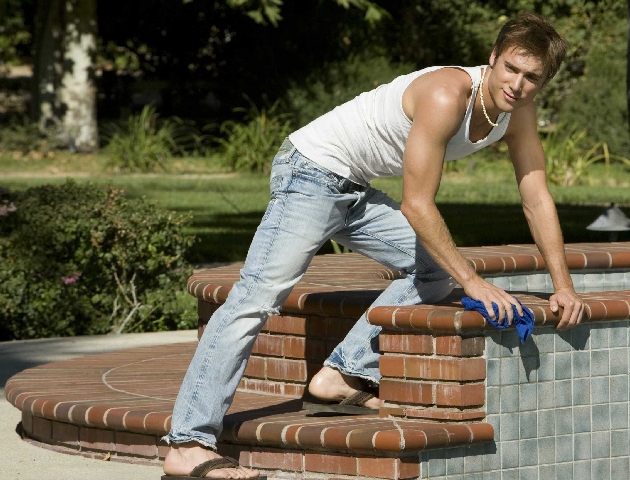 But is it too late? Will you, the audience, even care? The truth is, it does not really matter. This comedy is going into so many different directions with it all tying back into the Joel / 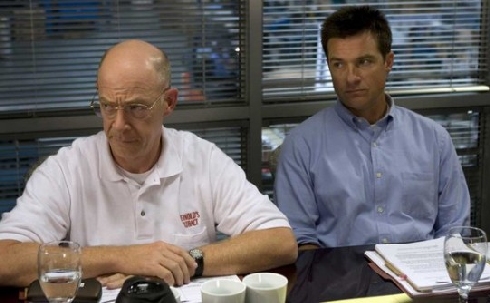 extract favor workplace and it is all so hilarious. Workplace employees include the always perfectly cast J. K. Simmons portrayed Brian, Joel's junior partner, Clifton Collins Jr. as aspiring floor manager, Step, Beth ("I question your commitment to Sparkle Motion") Grant as senior line worker Mary, Mike Judge was perfectly disguised (except for his Hank Hill voice) in the unaccredited role as line worker Jim. And most importantly, Mila Kunis as the huckster Cindy, who always had the angle on the next hustle, and hires sleazy ambualnce chasing lawyer Joe Adler played by KISS frontman Gene Simmons.

And do you remember that I mentioned the film had a Lundberg character? 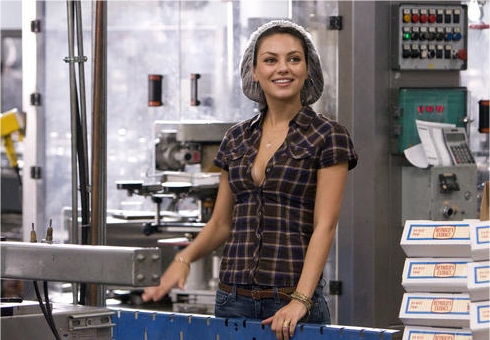 The "I'm going to have to go ahead and" ... line was replaced with some arbitrarily uttered words by David Koechner, the good natured, but worrisome neighbor Nathan. His presence was one of the many running gags that kept this well paced comedy interesting and hilarious to the end. Another crazy scene in the context of the running gag on the stupidity that narcotics inflict, but entirely plausible, was Willie, the Drill Instructor barking bong orders at Joel as he takes his first toke in years. Dean reclines on the couch, well versed in the humor of the moment as Matt Schulze amped-up his presentation of the high strung pot pumper.

Will I watch this funny little film again? Let's see: How many times have I seen "Office Space" now?