Smiling Faces Child Care Center stands like a beacon in rural Martin County, its clean, white siding contrasting with the deep green of the soybean fields around it.

Tiny vegetable gardens in raised boxes line the front walk and fenced-in playground beside the building. One collard plant is tall enough to shade the smiling face of the 3-year-old standing beside it. 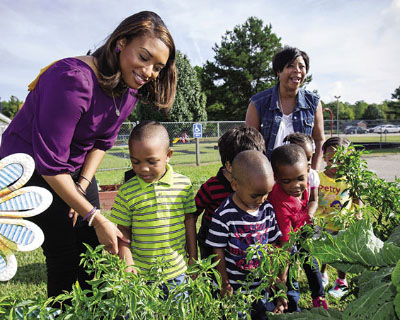 ECU nursing student Brianna Horne, far left, completed the MATCH Wellness program as a seventh-grader. Today some of the same lessons, such as growing and eating fresh vegetables, help keep kids healthy at her mother's Martin County child care center.
Director Bernadette Rodgers '08-who holds a master's degree in education from East Carolina University-and her daughter Brianna Horne lean over some pepper plants, pointing out "red" and "green" to a group of curious preschoolers.

"This class helped plant our peppers and collards this year," Rodgers says. "We grow blueberries, cucumbers, cherry tomatoes. ...We use these fresh ingredients in the children's meals."

Horne is a senior nursing student at ECU. In 2006-2007, as a seventh-grader at Williamston Middle School in Martin County, she was one of 110 inaugural participants in a wellness program created by her science teacher, Tim Hardison '82 '83.

Hardison learned that year that his fellow Martin County residents had the shortest life expectancy in the state. Further research revealed his rural, economically challenged county also had high rates of diabetes and cardiovascular disease-illnesses often linked to obesity. Determined to help his students avoid those diseases, he developed a Web-based curriculum that combined physical activity and nutritional education with real-time data management.

He called it "Motivating Adolescents with Technology to Choose Health" or MATCH Wellness (www.matchwellness.org).

Today MATCH Wellness is housed under Hardison's direction within ECU's Pediatric Healthy Weight Research and Treatment Center and reaches more than 5,000 youth in 34 public schools throughout the Carolinas and Mississippi-the state with the third-highest adult obesity rate in the nation.


Recently MATCH was awarded $470,000 by the North Carolina chapter of the U.S. Department of Agriculture's Supplemental Nutrition Assistance Program Education organization to expand into as many as 100 schools by 2018. Another $750,000 from the Blue Cross and Blue Shield of North Carolina Foundation is helping the team prepare for 10 times that capacity. Meanwhile, the USDA is exploring ways to promote expansion of MATCH into eight southeastern states. "It was so much fun, I decided to bring some videos to the day care for the kids to do," says Rodgers, who's operated the child care and early education center since 1987. She still exercises most mornings before work. And she sees to it that her students stay active with activities such as swimming and gymnastics.

As a middle-schooler, Horne relayed what MATCH was teaching her about nutrition, and those morsels were incorporated into the center's operations, too.

Staff moved the children from 2 percent to skim milk. They began substituting tortillas and whole grain bread for white bread in their sandwiches and serving fruit instead of crackers and cookies.

In 2011, the center received two awards from the Child and Adult Care Food Program, a federally funded program of the USDA's Food and Nutrition Service.


When we started doing the MATCH program, [Mr. Hardison] had the nurse weigh us on the scale. I started out weighing 161 pounds. Now since I am involved in different kinds of sports and physical activity, I have lost a total of 10 pounds so far.

- Horne, from an essay written in spring 2007
"They were impressed by our on-site gardens," Rodgers says. "We were ahead of the curve with government regulations like healthier menus, reduced screen times, increased activity levels."

On weekdays, the center feeds 140 children from newborn to age 12. Preschoolers typically get two meals plus a snack. Monthly newsletters sent home with the children are packed with easy, healthy, affordable recipes and fun nutritional information.

Smiling Faces is a model program, frequently hosting visitors from other day care centers who seek input and inspiration for growing their own produce, incorporating more activity into daily schedules and serving more nutritious food.

Rodgers-or "Miss Bern," as her students call her-attributes most of this success to what her daughter learned through MATCH.

In fall 2006, when Hardison had his students calculate their body mass index, he discovered more than half were overweight or obese.

"I knew they were at risk for obesity-related diseases-and shortened lives-but I also knew those outcomes are mostly preventable when people have the knowledge to make good choices," says Hardison, who holds bachelor's and master's degrees in physical education.

He set out to empower his students to make healthy choices for a lifetime. He created turnkey lessons such as "Re-think Your Drink" and "Portion Distortion" to align with educational standards-and to be delivered over 16 weeks across the curriculum to avoid overburdening individual teachers.

MATCH participants might journal about food choices during language arts class then calculate their BMIs in math. At every turn, they have opportunities to identify their individual strengths and weaknesses, set personal goals, monitor their behaviors and practice decision-making. A built-in "badge" system motivates students without the need for teacher manipulation.

The MATCH program has really impacted my family. I have gotten them to start eating healthy foods, stop eating fast and fried foods every day, and I'm making them do aerobic dances. We started to walk at the track twice a week and stopped eating in front of the television.

Horne penned those words around the time Hardison was remeasuring the students in her class-and realizing just how well his program had worked. Nearly three-quarters of the overweight and obese students had improved their BMIs.

To build support for his program, Hardison turned to Dr. Suzanne Lazorick, pediatrician and obesity researcher with ECU's Pediatric Healthy Weight Research and Treatment Center. The unique academic-community partnership that followed has garnered about $2.75 million in grants from groups such as the N.C. Joint Legislative Task Force on Childhood Obesity, the N.C. State Board of Education and the BCBSNC Foundation.

Bolstered by Lazorick's work, MATCH became the only school-based obesity intervention program in the country to earn a "research tested" designation from the Center for Training, Research and Translation-an independent group that evaluates programs for the U.S. Centers for Disease Control and Prevention.

"The federal government wants evidence-based programs," Lazorick says, "and MATCH has been consistently improving BMI in seven out of 10 overweight adolescents."

Jennifer MacDougall, senior program officer for the BCBSNC Foundation-which has invested more than $1 million in MATCH-says "astounding" results sparked their interest in the program, and consistent results have kept them at the table.

"Looking across school-based programs in North Carolina and the nation, we had never seen results as dramatic as MATCH," she says. "MATCH has achieved significant results in the schools in our state with some of the highest rates of health disparity. ...It is a critical component to combating the epidemic of childhood obesity and...could ultimately be a key factor in turning the tide."

According to the National Center for Health Statistics, childhood obesity has quadrupled in U.S. adolescents during the past 30 years. In eastern North Carolina during the past two years, the rate of extreme obesity (weight above the 99th percentile)-at 9.3 percent-was double the national average. Physical education teacher Allen Harrell works with Krysta Styons in the MATCH Wellness program at Chowan Middle School in Tyner.
It's no surprise the N.C. Institute of Medicine's Task Force on Rural Health included MATCH in their recent action plan, recommending the state Board of Education include obesity prevention in middle grades.

"We have a much bigger problem than most people realize," Hardison says. "If we don't get a handle on this now, we'll be in a world of hurt before long. We don't even know all the problems these kids will have without intervention."

Dr. Brian Caveney, vice president and senior medical director of Blue Cross and Blue Shield of North Carolina, the largest independent health insurer in the state, says MATCH is "the most doable, scalable, reasonable" approach he has seen to deal with obesity-related problems.

"Obesity affects all organ systems," Caveney says. "It diminishes the body's ability to respond effectively to injury and illness. When you look at the downstream impacts of childhood obesity, the total cost explodes. Why wait 30 or 40 years for diseases to fully develop, and have to put someone through the health care system to fix those problems, when that's the most expensive place-and the place we'll get poorer outcomes?"

An independent 2012 report by RTI International economist Lee Mobley estimated that implementing MATCH statewide could save N.C. Medicaid up to $330 million over five years in charges avoided by student participants alone.

"Anything we can do to improve the health of children and adults is good for employers and government," he says. "If you can save $300 for every dollar [invested], that's a no-brainer. Any investor would love that kind of ROI."

"Some of my heaviest kids might be the most flexible, so that's cool for them to see," she says.

She says the lessons that resonate most with her students are the ones about diseases that diet and activity can impact, because most have family members living with those diseases. 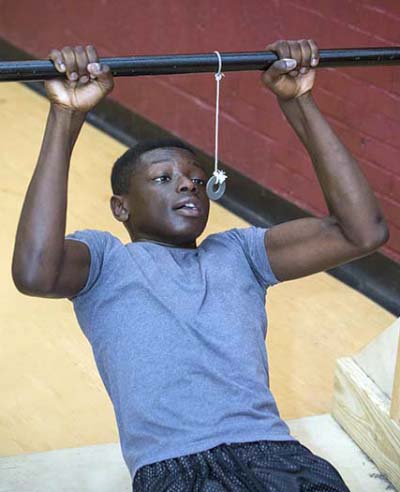 Kendrick Armstead does modified pull-ups at Chowan Middle School.
Eighth-grader Jadon Melendez says MATCH motivated him "to aim for the top" in his fitness goals. He reaches for water now instead of sodas and high-calorie sports drinks.

Classmate Brianna Miles-who rides her bike almost daily-was surprised to learn the ingredients in foods she thought were healthier. "I used to eat sugary cereals and donuts for breakfast," she says. "Now I tell my family to get bran and whole-grain cereals."

And therein lies the key to MATCH's success, Hardison says. "Thirteen-year-olds are starting to feel independent-capable of influencing their own outcomes. Arm 'em with knowledge, and they'll become agents of change. You can't shut 'em up."

This program has also helped me and my grandmother with our asthma. I feel like I have really made a huge difference in our lives. Now I am helping the children at my mother's day care center by making her serve healthy foods and getting the children fit so they won't have to go through these life-threatening behaviors.

Horne confesses she reverted back to some unhealthy habits after middle school, gaining more than 40 pounds by the time she was a high school sophomore.

"People thought I was pregnant," she says. "I was eating lots of fatty, processed foods. But I remembered what I learned from MATCH. I started back exercising 30 or 40 minutes several times a week. I cut back on sugars, fats and starches.

"I changed my lifestyle habits. During my freshman year at ECU, I got back down to my seventh-grade weight."

These days, a demanding schedule of nursing classes, clinical rotations and work can mean rushed meals and limited food options, but Horne's undaunted.

"My body has adjusted to new tastes now," she says. "I crave healthy things."