Published: Friday, January 22nd, 2016 @ 3:23 pm
By: John Locke Foundation   ( More Entries )
Publisher's note: The author of this post is Don Carrington, who is an executive editor for the Carolina Journal, John Hood Publisher. 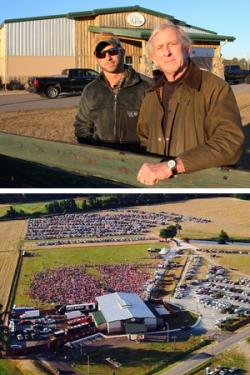 At top, Don Lassiter (front) and his son Trent in front of their event center The Farm, on property CSX wants for the Carolina Connector project. Below, an aerial photo of a concert at The Farm.
(Top photo by Don Carrington)
(Bottom photo from TheFarmNC.com)
RALEIGH     At an emergency closed-session meeting Wednesday night, less than a week after Gov. Pat McCrory announced a $272 million CSX rail terminal project near Selma, the Johnston County Board of Commissioners issued a statement opposing both the project at the current location and the railroad company's threats to use eminent domain to acquire property for the transportation hub.

While CSX officials compared the project - known as Carolina Connector - to similar rail cargo hubs in Chambersburg, Pa., and North Baltimore, Ohio, Carolina Journal has confirmed that the railroad did not use eminent domain to acquire property for either project. Nor did the railroad receive significant state subsidies for the Pennsylvania or Ohio projects, even though the company has said the Carolina Connector depended upon at least $100 million in state transportation funding promised by the McCrory administration.

A McCrory spokesman on Wednesday told CJ the CSX terminal would compete with other transportation projects for state funding - a point the governor failed to mention in his Jan. 14 press release on the Carolina Connector - and no decisions about funding would be made until March.

At press time, the governor's office had not responded to the Johnston County commission's statement opposing the CSX project.

The Carolina Connector, which company officials say will cover 450 acres, spurred immediate opposition from local property owners and other residents. Don Lassiter, 63, who owns about 45 acres between the CSX rail line and Batten Road, told CJ that at 8:30 a.m. Jan. 14 - two hours before McCrory issued a press release announcing the project - CSX acquisitions director Cameron Wilson came to Lassiter's home and said the railroad needed some of his land for the Carolina Connection terminal.

Lassiter, whose 28-year-old son Trent was present at the meeting, said he was not interested in selling. The Lassiters then said Wilson told them they had no choice, and that if they could not agree with CSX on a price, the railroad's legal team would handle the matter, implying that CSX would use eminent domain.

Trent Lassiter told CJ his family has owned the land since the 1700s. On the property is The Farm, a special-event facility that Trent Lassiter completed in 2013. The Farm hosts wedding receptions, business meetings, parties, and concerts. "American Idol" winner Scotty McCreery has played there and is scheduled for another concert June 4. Trent Lassiter is engaged to McCreery's sister Ashley.

No eminent domain or incentives

Both Gottschalk and Ross said that little if any state funds went into the CSX projects in their areas, but CSX probably received some federal funds for each project.

CSX spokeswoman Kristen Seay confirmed in an email that CSX did not use eminent domain in Ohio or Pennsylvania. And she added, "CSX has a proven record of coming to agreement with property owners on infrastructure developments across our network without employing eminent domain. We are beginning a lengthy dialogue with property owners in Johnston County and are committed to working closely with each individual owner to address his or her specific concerns. We are confident that we will be able to come to an agreement to ensure this project is positive for the owners and the community."

She also confirmed there "was no state funding associated with the development of either the Northwest Ohio or Chambersburg terminal."

In the Jan. 14 press release announcing the Carolina Connector project, McCrory did not mention that final approval from the state might not be issued until the end of March.

CSX issued a statement the same day, saying the company would spend $150 million on the project, but that the "development of the terminal is contingent upon securing an additional $100 million through the state of North Carolina's Strategic Transportation Investment program."

McCrory spokesman Graham Wilson said that CSX has received no guarantees that Carolina Connector will receive any state funding.

Wilson said CSX requested funding for the project in October or November. To secure STI funding, a project must be evaluated on four criteria - cost effectiveness; system health; safety and suitability; and project support - and "be compared against other statewide mobility project scores, including eligible highway and aviation projects,"' Wilson said.

"If the project scores high enough, it will be included in the list of statewide mobility projects to be funded in the next Draft State Transportation Improvement Program. This list should be available by the end of March," he said.

WTVD News first reported on the Lassiters' involvement with CSX and the experience of another landowner, Jennifer Edwards. According to the story, a CSX employee told Edwards she had six months to move. "I've lived here 58 years. There is no price on my property. This is my life," she said.