New Honor Celebrates Benefits of Philanthropy | Beaufort County Now | The presentation of a new recognition for philanthropy was the highlight of the East Carolina University Board of Trustees and ECU Foundation dinner on Nov. 10. | ECU,philanthropy,Golden LEAF Foundation,North Carolina,Advanced Manufacturing and Innovation Academy

The presentation of a new recognition for philanthropy was the highlight of the East Carolina University Board of Trustees and ECU Foundation dinner on Nov. 10.

Chancellor Cecil Staton recognized the Golden LEAF Foundation and Greenville residents Walter and Marie Williams with the inaugural presentation of the Chancellor's Amethyst. The distinction celebrates a demonstrated and ongoing legacy of philanthropy to the university and marks the beginning of a comprehensive campaign at ECU.

Staton believes The Golden LEAF Foundation, the Williamses and the university have similar goals: to serve the state of North Carolina and beyond. This shared vision has led to funding for multiple programs and scholarships at ECU for the betterment of both students and the region.

"Between the Golden LEAF Foundation and Walter and Marie Williams, more than $10 million has been donated thus far to the university. Those contributions have helped programs that range from the fight against obesity and diabetes to helping students with learning disabilities earn their college degree," said Staton.

The Golden LEAF Foundation was chartered by the North Carolina General Assembly to benefit the tobacco-dependent regions of the state through money received from a settlement with cigarette manufacturers. The foundation has given more than $6.5 million dollars in grants for programs and additional funding for scholarships at ECU. Most recently, grant funding has gone toward the Advanced Manufacturing and Innovation Academy, the Biopharmaceutical Work Force Development and Manufacturing Center of Excellence, and Retirement Migration and Economic Development: Eastern North Carolina as a Retirement Zone. 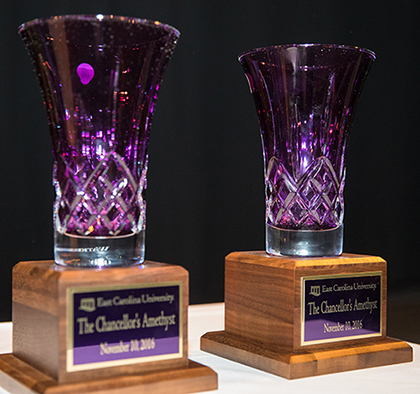 The Chancellor’s Amethyst is a new recognition to celebrate philanthropy, given this year to the Golden LEAF Foundation and Greenville residents Walter and Marie Williams.

Walter and Marie Williams have also been very generous to East Carolina University, donating to multiple campaigns and other initiatives since graduating from East Carolina in the 1950s. Their philanthropy helped start the STEPP Program for students with identified learning disabilities - an initiative that is now helping other universities create similar programs. They have also been very active in the Pirate Club, being members for 50 years and gifting millions of dollars to the Williams Arena at Minges Coliseum as well as to the Dowdy-Ficklen Stadium Southside Renovation Campaign.

"The good book says share and we've always been sharing," Walter Williams said about receiving The Chancellor's Amethyst. "Maybe it will stimulate other people to want to ante up and make us a better university with more fundraising."

Staton also took the opportunity to recognize the contributions of Wanda Johnsrude along with Phil and Lisa Hodges. 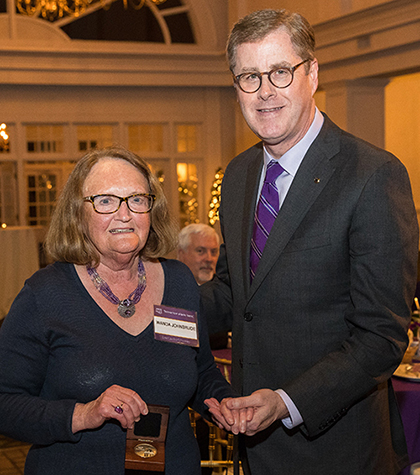 Wanda Johnsrude is recognized by Chancellor Cecil Staton for the medical school scholarship she endowed in her late husband's memory.

According to his wife, one of Irwin Johnsrude's wishes was to support medical students to lessen the financial hardships as they pursue their dreams of becoming physicians. Wanda Johnsrude endowed the scholarship in 2010 and continues to make substantial annual gifts to support it.

Phil Hodges was the founder and former president of Metrics Inc., which was sold, and now operates as Mayne Pharma Group. Because of his professional expertise, Staton said Phil is a key partner in the effort to build public-private partnerships between the university and the community. This fall, the Hodges finalized their estate plans to support the College of Allied Health Sciences and the Thomas Harriot College of Arts and Sciences. They are also supporting the Dowdy-Ficklen renovation project.

"ECU is obviously really important to me. I earned two degrees from here and ECU was a part of my success. I'm really honored to be recognized," Phil Hodges said. "It's so important we recognize that the state just doesn't carry us; we've got to have people who love the university and are willing to give to it."

As part of the night's gathering, ECU was recognized with the 2016 W.K. Kellogg Foundation Community Engagement Scholarship Award for the southeast region from the Association of Public and Land-grant Universities (APLU), in recognition of extraordinary community outreach initiatives by the MATCH Wellness partnership. East Carolina is one of only four universities in the country to receive this award.

The MATCH Wellness program is an interdisciplinary, community-university partnership created to combat the epidemic of childhood obesity. Since it began in 2007, nearly 13,000 students have participated in the MATCH curriculum, which is estimated to have prevented 1,300 cases of adult obesity.

Chancellor Cecil Staton celebrated philanthropy at the Board of Trustees and ECU Foundation dinner.

Today, MATCH Wellness is housed within ECU's Pediatric Healthy Weight Research and Treatment Center at the Brody School of Medicine and reaches more than 5,000 youth in about 40 public schools throughout North Carolina.

"It is truly an honor for our MATCH Wellness partnership to be recognized nationally," Staton said. "It shows that our efforts are making tangible impacts to our region and beyond, something we will continue to do."