As Elections/Ethics Board Merger Moves Forward, Would the Courts Allow it? | Eastern North Carolina Now | After two rushed committee meetings Tuesday, Senate Bill 68 seems on its way to quick passage. The floor vote on the measure merging the State Board of Elections and the State Ethics Commission is on Thursday’s House calendar

As Elections/Ethics Board Merger Moves Forward, Would the Courts Allow it?

Published: Saturday, April 8th, 2017 @ 7:21 pm
By: John Locke Foundation   ( More Entries )
Publisher's note: The author of this post is Dan Way, who is an associate editor for the Carolina Journal, John Hood Publisher.


After two rushed committee meetings Tuesday, Senate Bill 68 seems on its way to quick passage. The floor vote on the measure merging the State Board of Elections and the State Ethics Commission is on Thursday's House calendar.

But even if the House moves this bill to the Senate, as expected, the bigger issue for the GOP is whether it would satisfy objections raised by a panel of Superior Court judges. The panel in March struck down a fairly similar measure passed during a December special legislative session, saying Senate Bill 4 violated the separation-of-powers principle in the state constitution. Former state Supreme Court Justice Bob Orr isn't sure that this revised merger will pass court muster.

Rep. David Lewis, R-Harnett, said Tuesday the goal is to have the bill passed prior to the General Assembly's Easter holiday recess.

"The court ruling provided us guidance for what it saw as deficiencies in Senate Bill 4. We produced this bill to try to address those," Lewis said during debate in the House Committee on Elections and Ethics Law.

Orr said what Republicans hope to accomplish in creating a new Bipartisan State Board of Elections and Ethics Enforcement is "a pretty substantive change" from current law.

That Superior Court decision said the way the new board was set up violated the state constitution because the legislative branch would assume too much control over an executive branch function.

The three-judge panel said even though the legislation described the new board as "an independent regulatory and quasi-judicial agency," the basic nature of the board is administrative and remained unchanged. The judges cited McCrory v. Berger, a lawsuit brought by former Gov. Pat McCrory against the General Assembly, as a precedent.

"The court notes that the Coal Ash Management Commission at issue in McCrory was also nominally independent, but that did not alter the Court's separation-of-powers analysis," the ruling stated.

The three-judge panel said the new board's requirement for a six-member supermajority to take action impeded the governor's control. "Any three members of the New State Board may block any board action or investigation - meaning only three of the four legislative members can vote to prevent the board from acting," the ruling stated.

"In the context of the merger of these two boards, I think the court, if they have to review it again, will look and see how it stacks up against the test in McCrory v. Berger," Orr said of the changes made in S.B. 68.

Among other revisions, the governor would appoint all eight board members, four Democrats and four Republicans. Those nominees would come from a list of six names provided by each state party chairman.

Five members would constitute a quorum, rather than the previous six, and only five votes instead of six would be needed to issue a subpoena, summon witnesses, or compel evidence.

Board member terms would be two years instead of four, and the executive director would serve a two-year rather than a four-year term.

Orr said the governor making all board appointments "is historically the way it was," but it would be up to a trial court to determine if the way those appointments are now proposed meet the McCrory v. Berger test.

"Then they'd go to the supermajority test - does changing it from six to five make a difference? I think they would be analytical in doing it," Orr said.

Aside from the legal questions, Orr said he had other thoughts about the manner in which S.B. 68 is being ramrodded through to possibly prevent the matter from landing back in court.

"Wouldn't we be better to just have a reasoned discussion, and exploration of why we're making these changes - what are the benefits of doing it, are there arguments against making the changes?" Orr said.

"It was just sort of sprung in December, and to all of a sudden come back and try to continue to do it without much discussion" could be open to criticism, Orr said. "It might be a good idea. I just don't know."

Even if there aren't any legal implications of the hasty timetable, "I think there is a good governance perception. Are we doing things the right way, the way we'd want it done if we were in the minority," Orr said.

"While the court's not going to base its decision on that perception, they're aware of it, and it doesn't help if it's viewed as a bad government process," he said.

Another piece of the litigation puzzle would be whether Cooper's legal team believes the changes in S.B. 68 satisfy the concerns expressed in the three-judge panel's ruling.

"They've got some smart lawyers, so they're not going to litigate it again if they don't think there are some holes in it," Orr said.

Cooper's office did not respond to a request for comment. But he posted an essay on Medium.com saying he would veto the bill if passed and would challenge the measure in court if his veto were overridden. 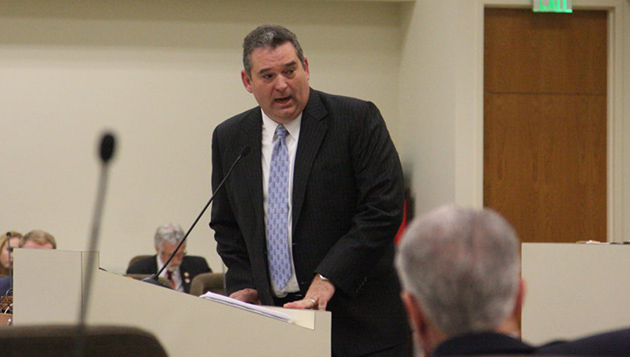 
In presenting the bill Tuesday to the House Committee on Elections and Ethics Law, Lewis said he thinks the measure meets the objections of the court.

"The intent is purely to allow the real and perceived functions of this board to be performed in as bipartisan a way as possible," Lewis said. "You don't really get that, per se, when you favor one party over another."

Even so, he noted that the Ethics Commission and Elections Board have delivered different opinions when they have ruled on similar issues.

Democrats grumbled loudly during the committee meeting about the way Republicans introduced the bill. They voted unanimously against it. The bill originally passed in the Senate as a measure encouraging local school boards to create recognition programs for student attendance. That language was stripped out, and the new Election Board language was inserted.

"Are you trying to get a vote on this today? I can't participate in a matter that took several weeks, several hours, that comes to us now in this form ... to look over something as complicated as this is," said Rep. Mickey Michaux, D-Durham, on Tuesday. "I think it's totally unfair. I think it's totally unwarranted. It's still got some of the same things that the court ruled against you on in here."
Go Back