Crossover hasn't Calmed Concerns about Wind Power's Effects on Military | Beaufort County Now | The controversy over the possible impact of wind energy turbines on military base operations has not blown over, even though none of the relevant bills met the April 27 legislative crossover deadline

Published: Tuesday, May 9th, 2017 @ 1:04 pm
By: John Locke Foundation   ( More Entries )
Publisher's note: The author of this post is Dan Way, who is an associate editor for the Carolina Journal, John Hood Publisher.


The controversy over the possible impact of wind energy turbines on military base operations has not blown over, even though none of the relevant bills met the April 27 legislative crossover deadline.

Concerns exist that the towering wind turbines could disrupt radar operations and interfere with training and flight paths at the state's air bases.

"Just because a bill doesn't make crossover doesn't mean it's dead," state Rep. Chris Millis, R-Pender, said Monday. Crossover refers to the date most bills must pass either the House or the Senate to remain alive for the rest of the legislative session.

Millis was primary sponsor of House Bill 470, which would have banned wind energy installations within 30 miles of a military base. It was defeated in the House Committee on Homeland Security.

He said his or other bills regulating wind energy plants are likely to resurface before the end of the session. Bills that don't meet crossover can be revived by putting them into spending measures or, in some cases, inserting the text of the "dead" bill into an unrelated measure that had passed one body before crossover.

Rep. John Szoka, R-Cumberland, was a primary sponsor of House Bill 574, which was approved in the House Energy and Public Utilities Committee by a 19-9 roll call vote. It failed to meet crossover because it needed approval from two other committees. 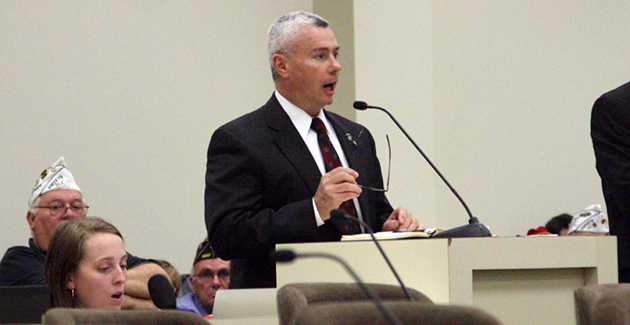 
He said the intent of the bill was to give more control to local governments for permitting and siting wind energy installations to assuage their concerns about the potential harm to military bases.

"I will fight any attempt by anyone to put any type of moratorium on any business in this state simply because somebody doesn't like it. That's not the role of the government to pick winners and losers," Szoka said.

He said he has toured the Amazon Wind Farm near Elizabeth City, which sparked the original debate over the proximity of military bases and wind installations.

"Nobody's shown me any proof that it interferes with flight patterns from any of the air bases, Air Force or Marine Corps," Szoka said.

Even so, he said he opposes sticking unrelated legislation in spending bills and has no plans to use other legislative maneuvers to revive H.B. 574 this session.

Millis called Szoka's bill "a total farce, a ruse," because it weakened the ability of local governments to regulate giant wind plants built in their own or neighboring areas. He said a moratorium may be the only alternative if lawmakers won't allow reasonable regulation.

Honeycutt was among several local officials testifying on April 26 that H.B. 574 watered down existing permitting protections.

"I believe that this bill complements the Department of Defense process" for determining whether wind energy projects interfere with military installations, he said during committee debate.

Belote is a former F-16 fighter jet pilot, and former commander of Nellis Air Force Base in Southern Nevada. He now is senior vice president of the public relations firm Cassidy & Associates in Washington, D.C. Prior to that he was a vice president of Apex Clean Energy in Charlottesville, Va., which built utility-scale wind and other renewable energy plants.

Belote said he knows firsthand that military bases and wind farms can co-exist. He said if the effects of a wind turbine project on a military base can't be mitigated, then it wouldn't be built.

He said he headed the DoD Siting Clearinghouse that military leaders use to assure that nearby energy projects, including wind farms, don't undermine the military's mission.

"The process is designed to ensure that any project approved by the clearinghouse has zero impact, positive or negative, on a base realignment and closure, or BRAC, action or scorecard," Belote said.

Havelock City Manager Frank Bottorff, a retired Marine Corps colonel and career aviator who was commanding officer of Marine Corps Air Station Cherry Point from 2006-09, said getting a thumbs-up from a clearinghouse was not sufficient to ensure military readiness.

"Adverse impact is in the eye of the beholder, and I can tell you from a pilot's standpoint, it's different than from a clearinghouse standpoint," Bottorff said.

"The wind projects that are already in development will ... degrade military training in North Carolina," said Bottorff, a member of the North Carolina Military Affairs Commission.

Bottorff warned that mitigation to allow for construction and operation of the skyscraping wind turbines could be a death knell for North Carolina military bases.

"Mitigation can mean training elsewhere," Bottorff said. "If the military can't train here, they will find a place they can train, and that will not be in our best interests." He noted that Cherry Point has a $2.1 billion local economic impact, and the military provides $66 billion annually to the state's economy.
Go Back