Published: Friday, January 5th, 2018 @ 8:40 pm
By: John Locke Foundation   ( More Entries )
Publisher's note: The author of this post is Dan Way, who is an associate editor for the Carolina Journal, John Hood Publisher.


The Republican-led Senate Select Committee on Judicial Reform and Redistricting on Wednesday rolled out a skeleton proposal for a constitutional amendment to switch from electing judges to a multistep appointment process.

But political observers are skeptical the public would surrender the right to elect judges and pass a required referendum if an amendment went to voters. The public also might balk at the complex nature of the proposal. Its multiple tiers give roles to the public, a special nominating commission, the General Assembly, and the governor. And before the proposal gets to the ballot, three-fifths of the members of the House and the Senate would have to adopt it.

"As much as I like the prospect, and believe in the merit selection [appointment] process for judges, I don't think the state's ready for it right now. I would be surprised if the amendment passed to be honest with you," Thom Little, a political science professor at UNC-Greensboro, told Carolina Journal.

Voters "love the idea of local control, and local elections, and 8 percent of the people show up. They like it in theory, but it's a lot more work in practice," Little said.

"I don't think they're going to be particularly happy with having this taken away from them," Taylor said. That's because voters have a populist democratic impulse. They are wary when they lose any ability to govern themselves, he said.

The plan endorsed Wednesday is an appointment/retention election model that is more complicated than systems used by other states, Taylor said.

Judicial redistricting and merit selection of judges was a political football in North Carolina politics for much of 2017. Republicans on the Senate committee insisted Wednesday's move was a handoff, not a punt.

"We think it's a good concept that just needs a little bit more detail," Daniel said.

"This is not the recipe. It's guidelines," said Sen. Bill Rabon, R-Brunswick, one of the three committee chairmen.

The Senate panel also authorized the creation of a bipartisan House-Senate committee to draft legislation. Daniel said this should speed the legislative process, and improve chances for passage. On Thursday, Senate leader Phil Berger, R-Rockingham, and House Speaker Tim Moore, R-Cleveland, each appointed 15 members to serve on the new committee.

Committee Democrats were surprised by the move. Nonetheless they voted for the motion.

"My personal opinion is I hope we can pass a plan by the end of January," Sen. Warren Daniel, R-Burke, a committee chairman, told Carolina Journal after Wednesday's meeting. The General Assembly returns to Raleigh Jan. 10 for a special session.

That measure sparked a review of weaknesses and potential constitutional violations in the way judicial districts are drawn - especially given major shifts in population since the last revamp of the districts - and possible inefficiencies in court operations.

"I feel very good about where we're at, and the prospects about getting something passed before the elections this year," Burr said, predicting a busy January. 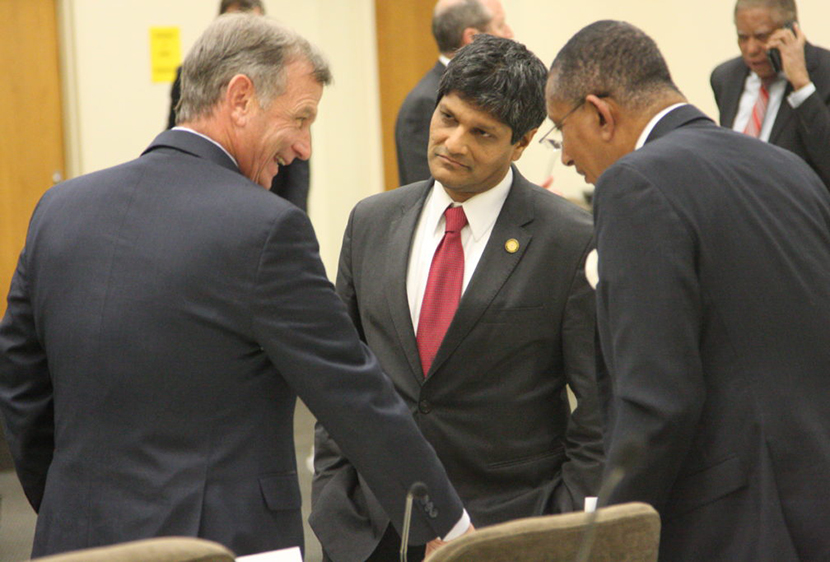 A joint legislative committee can iron out differences between the chambers on the front end. Otherwise, a conference committee would have to hammer out a compromise after each chamber passed differing bills. That would prolong the special session, Burr said.

Sen. Paul Newton, R-Cabarrus, presented the merit selection proposal, which he called "a balance between independence and accountability." It is a hybrid crafted from elements of several plans committee leaders examined, and is referred to as the Purple Plan.

Sitting judges would retain their seats. Vacancies would be filled by appointment. The chief justice of the state Supreme Court would appoint a seven- or nine-member nonpartisan selection commission, with members serving staggered terms.

Members of the public would nominate candidates for vacancies. Candidates also could nominate themselves. Backers say this would guarantee public participation at the front end while blocking undue influence of special interests or from other branches of government.

Legislators are elected every two years, twice as often as the governor, which would thwart partisan influence, Newton said. "We can be held accountable if we are picking and sending up judges that our citizens do not approve of."

The governor would pick one of the nominees, who would serve until the second general election after appointment. Voters then would decide whether to confirm the judge to a 10-year term, meaning judges would serve from between 12 and 14 years.

The judge would not be eligible to run for the same court after that, but could seek office at another judicial level.

Even though Republicans have a three-fifths majority in the House and Senate, Taylor said, not all Republicans are on board with the plan. Some Democrats may need to back the amendment before it reaches the ballot. Taylor suggests that won't happen.

"The Democrats aren't going to play ball with this. I'm not sure if that's based upon their genuine views on the way judges should be picked in the state, or whether it's largely just an expression of opposition to the Republicans," Taylor said. "It's a Republican plan. They're upset with the way the process has taken place."

If the plan isn't approved in 2018, its chances for passage could diminish after this year's elections, Taylor said. That's because Republicans could lose seats, and drop below the three-fifths majority needed to pass a constitutional amendment.

And, as Little and Taylor said, voters may not want to put the ultimate selection of judges in the hands of politicians.
Go Back