Remarks by President Trump on a Year of Historic Progress and Action to Combat the Opioid Crisis | Beaufort County Now | I'd like to begin today's remarks by providing an update on the suspicious packages and devices mailed to current and former high-ranking government officials. 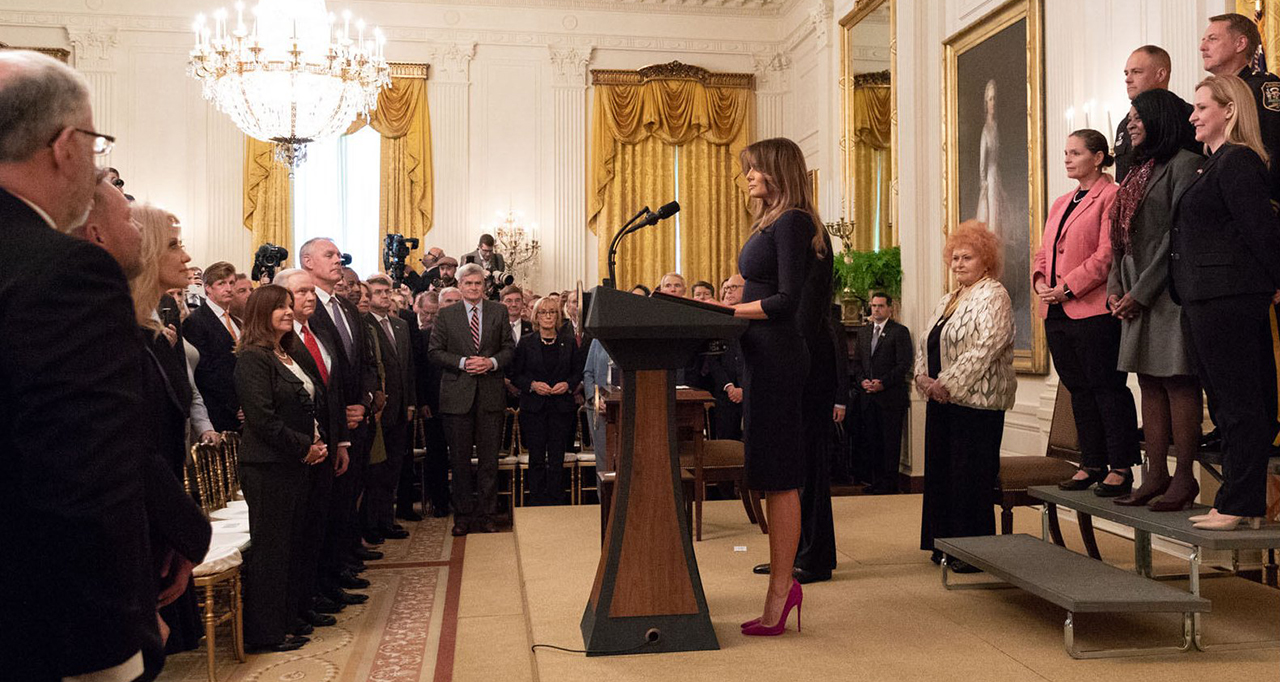 The reception in the East Room of the White House: Above. (White House photo)     Click image to expand.

THE PRESIDENT: I want to thank you very much, Melania. I know how hard you've worked on this. And that's just one of many languages that you know, so it's just amazing the way you can do it. Thank you very much, darling. Appreciate it. (Applause.)

Also I want to thank Mrs. Pence for being here. You have been just so terrific working alongside of our great Vice President. And thank you very much, Karen. Really appreciate it. (Applause.)

I'd like to begin today's remarks by providing an update on the suspicious packages and devices mailed to current and former high-ranking government officials. The safety of the American people is my highest and absolute priority.

As we speak, the packages are being inspected by top explosive experts, and a major federal investigation is now underway. The full weight of our government is being deployed to conduct this investigation and bring those responsible for these despicable acts to justice. We will spare no resources or expense in this effort.

And I just want to tell you that, in these times, we have to unify. We have to come together, and send one very clear, strong, unmistakable message that acts or threats of political violence of any kind have no place in the United States of America. (Applause.) Thank you very much.

It's a very bipartisan statement, I can tell you, from both sides. We both agree on that.

This egregious conduct is abhorrent to everything we hold dear and sacred as Americans. My administration will provide additional updates as they become available. And I just want to thank everybody for their understanding. We're extremely angry, upset, unhappy about what we witnessed this morning, and we will get to the bottom of it.

We are gathered together today to address America's drug and opioid crisis - and a crisis, it is - which now claims 70,000 lives a year.

One year ago, I addressed the nation in this very room and declared the opioid crisis a national public health emergency. And that's a legal statement. That's a legal term.

Today, we are here to update the American people on the historic action we have taken and to sign landmark legislation to defeat the opioid epidemic.

I want to thank the Cabinet members in attendance today: Attorney General Jeff Sessions - thank you; and Secretaries Ryan Zinke, Alex Acosta, Alex Azar, Ben Carson, Betsy DeVos, Robert Wilke, and Kirstjen Nielsen. Thank you all very much. I know how hard you're working on this and other things. (Applause.) Thank you.

And thank you also to Kellyanne Conway for her tremendous efforts. Thank you, Kellyanne. I appreciate it. (Applause.)

We're also honored to be joined by state and local leaders, private sector partners, along with families who have suffered terrible heartache from the opioid epidemic. Together, we are going to end the scourge of drug addiction in America. We are going to end it, or we are going to at least make an extremely big dent in this terrible, terrible problem.

Over the last year, we have mobilized the entire federal government to address this crisis. We have secured $6 billion in new funding to combat opioids - the most money ever received in history.

I want to thank the members of Congress in attendance today - terrific people - who have been instrumental in this effort: Senators Lamar Alexander - Lamar, thank you. Lamar, thank you very much. Rob Portman. Thank you, Rob. Congressman Greg Walden. And also, Greg, for Right to Try. All of us. Everybody over there. Right to Try - it's having a tremendous impact already. Thank you very much.

It's a great job. They work hard on it. They feel so strongly.

My administration has also launched an unprecedented effort to target drug dealers, traffickers, and smugglers. We are shutting down online networks, cracking down on international shipments, and going after foreign traffickers like never before.

For the first time ever, in August of this year, the Department of Justice indicted two Chinese nationals who were shipping fentanyl and other lethal drugs to our country.

Here with us today is Sam Mortensen of the Nebraska State Patrol. Where is Sam?

THE PRESIDENT: Oh. I thought he was around here someplace. (Applause.) Thank you, Sam.

In April, Trooper Mortensen seized 118 pounds of fentanyl - enough lethal doses to kill 26 million people. Is that even believable? Can you imagine? Trooper Mortensen, that was a job well done.

And I'd like to just have you come down here. Just for a second. You didn't know you were going to this. Come on. (Applause.) Say a few words.

TROOPER MORTENSEN: First off, thank you for having me here today. This is a huge honor, not just for myself, but to represent all of the law enforcement officials in Nebraska. Every day, there is a lot of people out there that are doing what I did. They're doing it day in and day out. And there's a lot people that came before me that taught me how to do this job.

Last year, the brave men and women of ICE and Border Patrol - people that we have to really thank. They are doing some job. Seized more - right? (Applause) Really doing a good - and that's a hard job - seized more than 2.8 million pounds of illicit and deadly drugs.

Early estimates show that in 2017 and 2018, fentanyl seizures were more than four times higher than the previous two years. We're really putting big effort into fentanyl and other drug seizures.

Last year, we increased the average federal sentence for drug trafficking to its highest level since 2013. We're also putting a stop to another dangerous supply of opioids: over-prescribing doctors - over-prescribing. They have to be careful.

Over the past 20 months, our Department of Justice and Department of Health and Human Services Fraud Strike Force targeted a combined $3.3 billion in waste, fraud, and abuse related to the unlawful distribution of opioids. That's by far the most ever.

The total amount of opioids being prescribed has decreased by nearly 20 percent in a very short period of time. I'm very proud of that. We have nearly doubled funding for opioid research, including for the development of non-addictive painkillers.

Over the past 20 months, our National Prescription Drug Take Back Days - very important, really something - have collected more than 2.7 million pounds of unused or unwanted prescription drugs.

We have launched one of the largest ad campaigns to keep young Americans from getting addicted in the first place. If we can do that - those ads are so well - I mean, they're so important. It's one of the most important things that I've told Melania and Kellyanne. We put on really powerful ads, we pay for those ads, and we get people to stop before they ever start. And maybe that should be the name of the campaign - (applause) - "Stop before they ever start."

For those already addicted, we are delivering lifesaving help. Last month, my administration gave state and local governments, community organizations, and other groups an additional $1 billion to address prevention, treatment, and recovery.

We have given states waivers from outdated rules, and increased by 50 percent the number of people being treated in specialty facilities for heroin addiction. Tremendous amounts of money and care have been given to those specialty facilities. And they are working; they're having a tremendously positive effect.

We're working to screen 100 percent of the federal inmates for drug addiction so we can offer them the treatment they need while they serve their sentence. And when they get out - (applause) - and when they get out, our economy has become so strong that they are getting jobs for the first time almost ever, certainly in memory. They're coming out into an incredible society, an incredible economy. People are hiring these inmates. They're getting a second and sometimes a third chance.

And the response has been incredible from the people that are doing the hiring. This is the first that it's ever happened. They're getting a chance, and it makes me very proud. And that's because of a tremendous economy, and people also opening up their hearts and minds to giving these people a second chance. So that's really terrific. (Applause.) Thank you.

Joining us today is DeeDee Wheeler from Upstate New York. DeeDee was born in prison to a mother struggling with alcoholism. DeeDee struggled with drug addiction for years. But three and a half years ago, she began a really incredible recovery program. Since then, she has been drug-free.

DeeDee now earns a living as a very talented seamstress and designer - they love her; they love her at that firm - proudly bringing home a paycheck to provide for her two sons. DeeDee, you inspire us. And I'd love to have you come up and just say a few words. (Applause.) DeeDee?

MS. WHEELER: First of all, I want to thank God. Without Him, it's impossible. Nothing is impossible with God.

And due to the fact that I'm with Unshattered - Unshattered is a foundation. It gave me a sense of purpose because I knew I couldn't go back to Jersey - to go back to people, places, and things. And I'm just honored to be here, and I'm proud to say that I'm drug-free and I surrender my life. And I just want to thank God. (Applause.)

THE PRESIDENT: Thank you, DeeDee.
Go Back